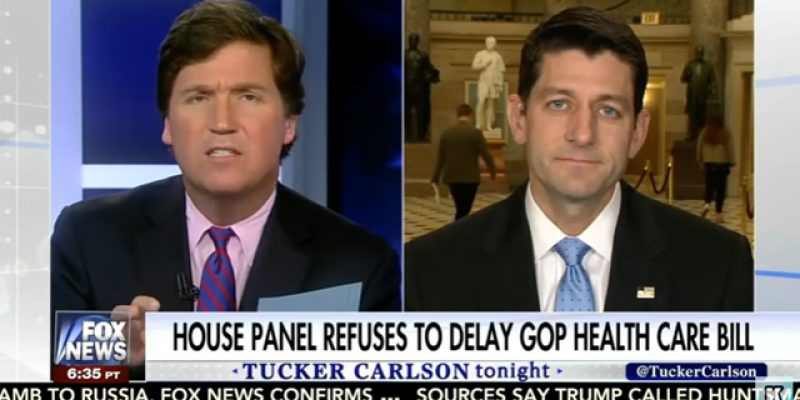 This is about as good a discussion as you’ll find on the bill, which we have not read in full but what we see of it doesn’t make us overly joyful. Ryan, the House Speaker charged with an exceptionally difficult job here – he not only has to herd cats enough so as to produce 218 votes in the House for something that would actually serve to improve access to health care and reduce costs, but he has to do it in a way which prevents the Democrats from being able to filibuster it in the Senate – does his best to defend the plan.

And to his credit, he makes some good points, especially if you buy the idea that some of the things the bill does not contain – interstate health insurance, throwing the market open to association health plans (meaning, the ability to buy group health insurance that doesn’t come through your employer) – which one would think ought to be staples of any market-based health care reform plan, are only absent because they’re trying to pass this thing through budget reconciliation and those won’t fit in that box. Ryan says this is a multi-stage process to truly repeal Obamacare and replace it with something better, and that’s believable – we can buy that he really is trying to do this because he’s been consistently vocal in support of those elements in the past and so has the House GOP leadership.

The problem here is the pitch. It’s just too complicated, and Ryan and the leadership simply doesn’t have enough of a reserve of trust – particularly from Republican voters – in order to sell a multi-stage, complex overhaul of one-sixth of the economy. He’s trying to defuse a bomb, arguably while it’s going off because Obamacare is falling apart on its own, when one could argue that a better solution might just be to implement some safety-valve policies which will allow the market to seep in and find its own solutions for the inadequacies of Obamacare. Yesterday we opined on four steps Congress ought to take to establish that safety valve; see that post here.

In any event, it’s a smart discussion and it’s worth watching. Carlson gives Ryan a skeptical treatment but lets him make his case, and the Speaker doesn’t do badly.