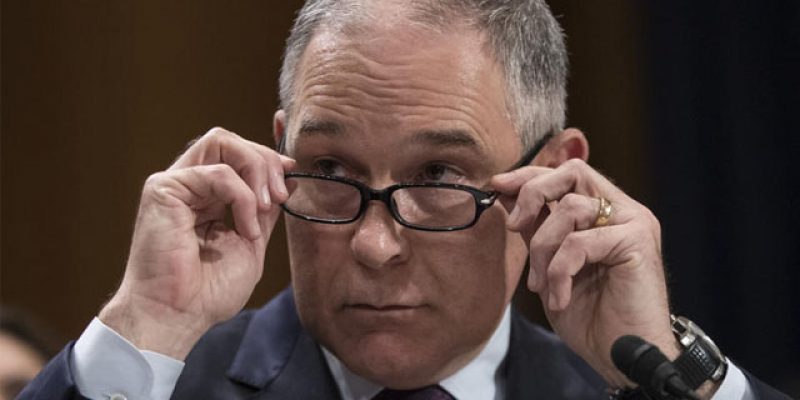 …and all hell is about to break loose on the Left.

What Pruitt, the new head of the EPA who is already doing some serious work in cleaning out the dead wood and harmful regulations which have piled up at that agency, is saying shouldn’t be controversial – namely, that the science on these global warming claims isn’t settled, there are too many variables existing in a chaotic system that controls global climate to accurately measure the impact of fluctuations in what is basically a trace gas in the atmosphere on the planet’s temperature and therefore making scandalously expensive federal policy based on the shaky claims of an increasingly discredited special interest group isn’t a good idea. But he’s also saying that he’s open to further scientific inquiry on the subject and acting appropriately on what findings that inquiry might produce.

This is not going to go over well on the Democrat side.

Pruitt might choose not to accept that fact, but it’s true. Scientists have overwhelmingly found a causal relationship between the carbon dioxide humanity has been spewing into the atmosphere since the industrial revolution and the ever-increasing global temperatures.

The global carbon dioxide level is expected to reach a record high this spring, as it has over the last several years. Meanwhile, the country has been experiencing record warmth, and sea ice is approaching — if it hasn’t already begun — a death spiral.

The majority of the scientific community believes humans are the primary cause of global warming. And as NASA puts it, carbon dioxide emissions are “the most important long-lived ‘forcing’ of climate change.” Scientists at the United Nations have warned that the planet will be in dire straits if nations don’t dramatically decrease their carbon emissions. So it’s problematic that the man in charge of U.S. environmental regulations doesn’t think his agency should focus on working toward that goal.

This isn’t the first time that Pruitt, who sued the EPA over a dozen times before becoming its administrator, has broken with the scientific community. He’s also said he doesn’t believe humans are the primary cause of climate change and once expressed doubt that mercury pollution is dangerous.

And the New York Times…

Mr. Pruitt’s statement is not consistent with scientific research on climate change. A report in 2013 by the Intergovernmental Panel on Climate Change, a panel of about 2,000 international scientists that reviews and summarizes climate science, found it to be “extremely likely” that more than half the global warming that occurred from 1951 to 2010 was a consequence of human emissions of carbon dioxide and other greenhouse gases.

A January report by NASA and the National Oceanic and Atmospheric Administration concluded, “The planet’s average surface temperature has risen about 2.0 degrees Fahrenheit (1.1 degrees Celsius) since the late 19th century, a change driven largely by increased carbon dioxide and other human-made emissions into the atmosphere.”

You’ll notice that those “scientific” sources quoted by Pruitt’s detractors are offering relatively vacuous claims in their own right, similar to those Bill Nye attempted to offer last week on Tucker Carlson’s show before imploding as those claims were challenged.

Pruitt isn’t convinced, and nor should he be. He’s in charge of an agency with a record as, pound for pound, the single most economically destructive in the entire federal government, and he’s right to take the position this shouldn’t continue without some damn good proof that what it’s doing is a good idea. For this, he’s destined to be the most hated man in the Trump administration. God bless him.