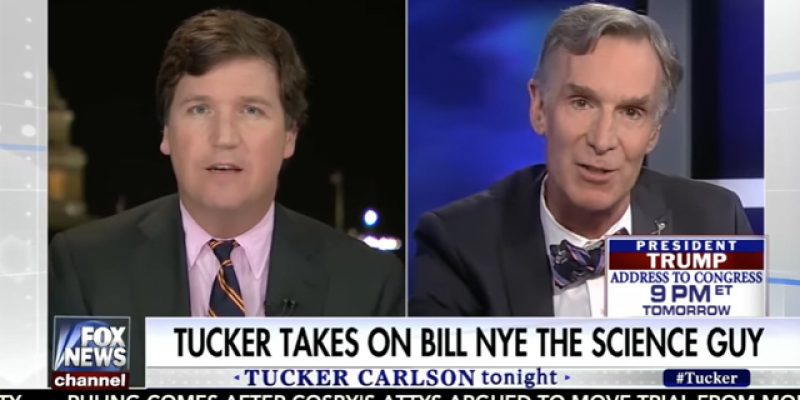 Objectively, Bill Nye The Science Guy, who is not actually a scientist but rather a mechanical engineer, should have had his career come to an end on Monday owing to what you’ll see below. Nye, who is busy popularizing the leftist myth that there is settled science surrounding the idea of anthropogenic global warming, said over the weekend that it’s “cognitive dissonance” which explains the fairly widespread lack of buy-in to that myth.

That wasn’t good enough for Carlson, who had Nye on his show and examined his reasoning by asking a fairly simple question for which Nye should have had an answer but did not – namely, what amount of the global warming Nye sees is man-made? Carlson wouldn’t leave that question alone despite Nye’s inability to give a straight answer to it, and before it was over Nye was babbling about English winemaking and declaring that global temperatures ought to reflect what they were in 1750 had man not screwed up the climate.

This is, of course, rubbish – 1750 fell right in the middle of the Little Ice Age, a period of global cooling which happened from the 16th to 19th centuries. Prior to that time, there was a great deal of winemaking in Britain; in fact, for most of the history of that land domestic winemaking has been the norm, and if the climate allows for the growing of wine-worthy grapes there today it’s merely reflective of a return to normal.

Nye calls this an apocalyptic sign that the oceans will inundate all of us living along the coasts. But you can’t spin yarns like that on Carlson’s show without being challenged. As Nye is. And handles it poorly. It should be the end of his time as an authoritative figure on subjects in which he’s had no formal training and clearly lacks expertise.

Interested in more national news? We've got you covered! See More National News
Previous Article Who Came Up With The Idea That Democrats Should Wear White To Trump’s Speech?
Next Article This Probably Doesn’t Help To Build The Republican Party’s Brand In Baton Rouge…