…nor will it do much to attract people under 65 to the party. 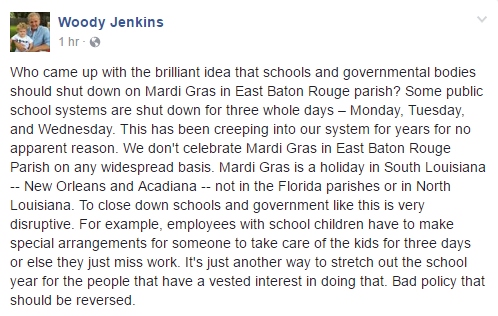 We could make a bunch of comments on this, but we won’t. We’ll just note that the Democrats control East Baton Rouge Parish for the most part and other than the seven Metro Council seats out of 12 Republicans are hanging on to for now, there is little to stop the parish from going the way of Orleans.

And when the chair of the Republican Party of East Baton Rouge takes to social media in order to make himself the Grinch of Mardi Gras, which is Louisiana’s most unique holiday, it bodes poorly for changing the current trend.

Interested in more news from Louisiana? We've got you covered! See More Louisiana News
Previous Article VIDEO: Did You Catch The Creepy Bill Nye On Tucker Carlson Monday Night?
Next Article We Now Have A Battle Of Ads In The District 42 Race