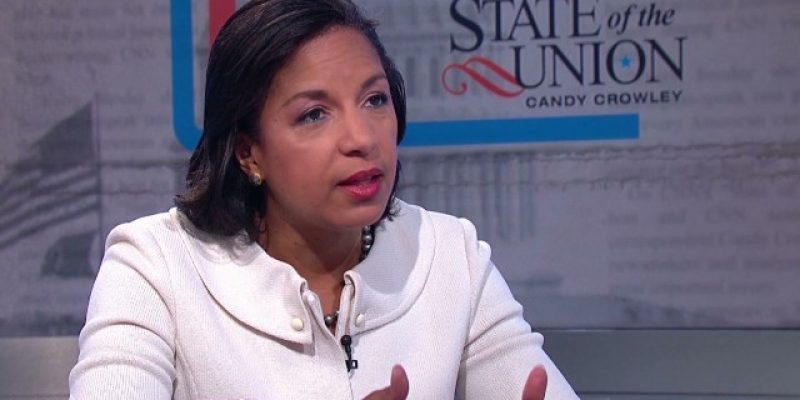 Hopefully she’ll finish out her career someplace like Leavenworth, if this is true…

Susan Rice, who served as the National Security Adviser under President Obama, has been identified as the official who requested unmasking of incoming Trump officials, Cernovich Media can exclusively report.

The White House Counsel’s office identified Rice as the person responsible for the unmasking after examining Rice’s document log requests. The reports Rice requested to see are kept under tightly-controlled conditions. Each person must log her name before being granted access to them.

Susan Rice was the Obama administration hack who went on five different Sunday news shows to claim the Benghazi massacre was incited by a YouTube video painting a less-than-complimentary picture of the Prophet Muhammad, a contention which was pure bunkum. Rice was one of three Obama administration officials – John Brennan and Loretta Lynch were the other two – with authorization to “unmask” Americans picked up in intelligence intercepts.

Mike Cernovich, who wrote the story at Medium.com fingering Rice as the unmasker of Mike Flynn and the other Trump officials, is also claiming that the New York Times’ Maggie Haberman had the story last week but is sitting on it in an attempt to protect the Obama gang. We don’t know whether that’s true, but Cernovich’s exclusive certainly meshes with the story Fox News’ Adam Housley broke on Friday about a “very well known, very high up, very senior, in the intelligence world” Obama official being behind the unmasking, and the unmasking having nothing to do with national security and everything to do with a political hit-job.

What’s striking about the Times story is the spin it took. Trump had previously claimed he had been “wire tapped” (quotation marks in his original Tweet), leading to media screams that he prove it. The Times’ own reporting proves that President Trump and his associates were spied on.

The Times, rather than admit Trump had been vindicated, instead focused its attention on the question of who leaked the reports to Nunes:

Since disclosing the existence of the intelligence reports, Mr. Nunes has refused to identify his sources, saying he needed to protect them so others would feel safe going to the committee with sensitive information. In his public comments, he has described his sources as whistle-blowers trying to expose wrongdoing at great risk to themselves.

Since when did journalists attempt to unmask sources? The Times, WaPo, and other outlets rely on anonymous sources in nearly every article about national security. It’s clear they have an agenda — that agenda is not telling the truth.

I said last week on Facebook that we’re ultimately going to find out at the bottom of all this Trump wiretapping business is pure vicious politics, and Russia has little or nothing to do with it other than the Russians were trolling the American political world to embarrass as many people as possible within it (which is little different than what the Russians have been doing since 1917). It appears this is the case, and the fact some of Trump’s advisors have done work for Russia-connected entities in the past was merely a fig leaf played up by a compliant media – after all, there were more Russian connections of larger ethical concern in the Clinton camp than in Trump’s camp, and those have barely been touched.

This entire imbroglio is beginning to show two things: the moral absence and complete disregard of American legal and political interests of the Obama palace guard, and the willful incompetence of the legacy media to play its role as referee and truth-teller in the political process. Susan Rice should have been hounded out of the Obama administration when she told bald-faced lies to the American people and deliberately misinformed us about the incompetence and carelessness of the administration she worked for in protecting its own people, and instead she was allowed to remain, untouched. The final product was for an outgoing administration to smear and disturb the transition of a duly-elected president to office thanks to her efforts.

It takes a distinctly unpatriotic, cynical and maleficent human being to build a record such as Rice’s. It appears she was a good fit for the Obama administration. Let the subpoenas fly, and hopefully soon we’ll find out whose orders she was working on.

Does anybody know whether Obama has returned from the South Pacific yet? He sure seems to have been there for quite some time, hasn’t he?