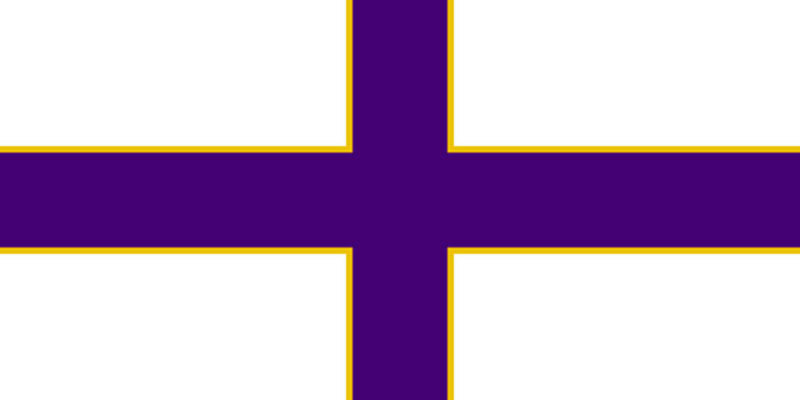 Ryan Heck’s post last night on yesterday’s very strange media event in which Baton Rouge’s mayor and LSU’s president took turns swearing to defeat the St. George movement is a must-read, as Heck was on the Metro Council two years ago when the St. George group took its first turn at incorporating a new city in the southern part of East Baton Rouge Parish, and he’s familiar with some of the behind-the-scenes maneuvering that was done at that time.

What I can’t figure out is why this continues to be a subject Broome, and now with the help of F. King Alexander, who seemingly cannot help himself but to step in each pile of ordure he sees, injects into the news.

Here’s a little tidbit of information most people don’t know: the committee that worked on the St. George incorporation two years ago has not had a meeting since deciding not to appeal the rather irregular decision by Judge Wilson Fields denying a writ of mandamus certifying their petition. They’ve gone their separate ways for almost two years, and some of them I’ve talked to have said they don’t have the time to devote to leading a new effort. If and when the St. George movement ignites again it’s going to be with at least partially a new group of leaders, and there has been no particular effort to date to find that new blood.

In other words, while St. George might be the 800-pound gorilla in the room, that gorilla has been asleep for a good while and hasn’t shown many signs of waking up of late. At some point he certainly will, but most would agree that letting him sleep awhile is the best course of action.

But not Mayor Broome. Oh, no. She’s determined to poke that gorilla with the shortest sticks she can find.

Broome ran a campaign on St. George and tried to tie Sen. Bodi White, who brought enabling legislation for St. George as well as the independent school district effort that preceded it, to St. George. She called White “divisive,” when White’s campaign mantra where St. George was concerned was that he was the best insurance against the new city since he actually had an interest in soothing the concerns of the people in the St. George movement. Of course, that rather basic point was over the heads of most of Broome’s supporters who just figured a bunch of majority-white people who wanted to incorporate a city next to majority-black Baton Rouge proper would pretty much have to be racists; when many of those supporters are also followers of the Gary Chamberses and Reginald Pitchers and Cleve Dunns of the world, there is more than a little projection in that thinking, but I digress. Broome kept St. George on the front burner during the campaign, and perhaps it was a good idea. She won, if barely.

Then there was her transition team document, which devoted an entire section to slandering the St. George people as racists attempting to exercise “white privilege,” in some of the most inflammatory language imaginable. The document was written, we understand, by Southern University political science professor and race-baiting radical Albert Samuel; it was one of the most counterproductive and divisive screeds we’ve ever seen and it was shocking Broome released it to the public. It’s hard to see that fiasco as anything other than Broome picking a fight with the St. George crowd.

Broome also has continued to babble about “having a meeting” with the St. George people. No such meeting has taken place; as said above the St. George folks aren’t even meeting with each other as yet, much less the mayor. But she keeps talking about having one rather than actually doing it – which keeps St. George in the news despite there not being any St. George activity.

And then yesterday’s strange spectacle, in which Broome and Alexander rather openly discussed LSU’s participation in killing St. George in 2015. Alexander’s participation in that can be explained by his apparent complete inability to keep his mouth shut where sensitive issues are concerned. But why would Broome dragoon him into such a discussion?

It’s so easy to dismiss the St. George movement at present with a statement like “So far as I know that movement is dormant right now, and we’re confident their concerns will be satisfactorily met when they see how we’re leading Baton Rouge forward. If that changes we’ll address it appropriately, and in the meantime my door is open to all of the citizens of East Baton Rouge, whether they live in what would have been St. George or elsewhere.”

And then there is no reason for anyone to get upset. 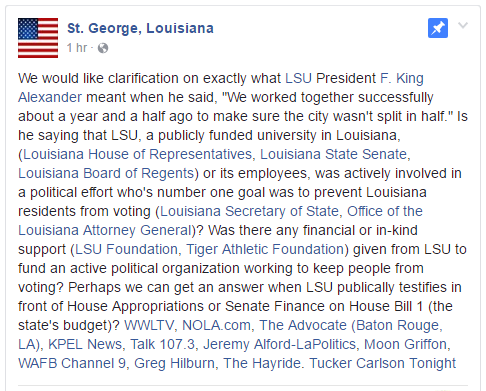 Now it’s a major news story and there are legislators calling LSU and asking what in the hell Alexander was doing yesterday. Most of the Baton Rouge delegation in the legislature stayed far away from the St. George issue, because there was little they could actually do about it one way or another, but took the position that people have the right to vote or sign a petition if they want and let the majority rule. It becomes difficult to hold such a neutral position when LSU inserts itself into the controversy, particularly if you’re on a committee deciding LSU’s funding levels.

On the surface this seems like breathtakingly poor judgement and pigheaded stupidity. It makes us wonder if Broome isn’t doing some of what her predecessor Kip Holden practiced in the first round of St. George – namely, setting up that movement as the villain upon which all of Baton Rouge’s ills might be blamed. It’s always good to have a bad guy to rally your folks around, particularly if your leadership is sub-par. Fidel Castro and Hugo Chavez had the Americans, Hitler had the Jews, Lenin had the kulaks, the North Koreans have Japan and South Korea (and the Americans)…even Donald Trump had China during the campaign (and then the Democrats had Trump and the Russians). Perhaps Broome has St. George, which gives her pals like Chambers and Pitcher the opportunity to berate whitey for his privilege and racism.

In doing this she will breathe life into St. George, of course, and that committee will likely be inundated with people asking to get involved. They’ll find their new blood and maybe even some financial resources they didn’t have the first time around. And even misstep Broome makes, every bad story about crime or poor schools or corruption that hits the local news, will only serve as an alarm to wake the gorilla.

It could be that St. George is the disaster for East Baton Rouge Broome says it is. But they’ll have her to thank for bringing it to life.