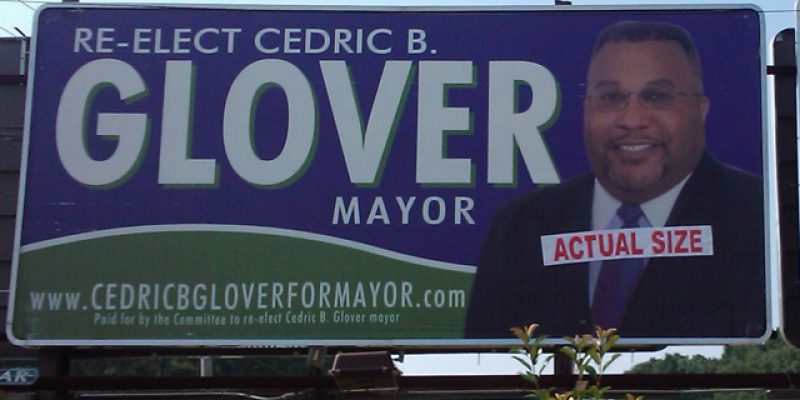 We all love a good dust-up, right? Well, the antics of Shreveport Democrat state representative Cedric Glover have set off a nice one this week.

As our readers know Glover is trying to stop LSU and ULL from licensing local breweries to brand beer with their imprimatur. Tin Roof Brewing Company in Baton Rouge has debuted Bayou Bengal Lager, and Bayou Teche Brewing Company has put Ragin’ Cajuns Genuine Louisiana Ale, which we hear is especially tasty, on the market.

When Glover piped up about the subject, of course, LSU President F. King Alexander hammered him. Alexander told The Advocate last week that House Bill 610 was “nonsense” and that Glover “likes to throw stones.” He also indicated a belief that Glover holds a grudge against LSU, where he attended but did not graduate.

Alexander’s disparaging comments inspired Glover to fire off a letter expanding the argument beyond beer and into the question of why college athletes don’t get paid – because this is, of course, something Cedric Glover, who wasn’t a particular success as Shreveport’s mayor, is qualified to sort out.

Here’s the letter, which will likely boost the use of Advil among our readership…

It was certainly disappointing to see LSU President Dr. King Alexander respond in such a personal and petty way regarding House Bill 610, my bill that would prohibit colleges and universities from authorizing an “official” alcoholic beverage.

LSU and the University of Louisiana at Lafayette have signed such contracts and local breweries market beers as the official brews of the universities.

Alexander said in a news story about my bill in The Advocate: “It’s nonsense. Glover likes to throw stones. He’s never been a fan of LSU.”

Like just about all Louisianans, I love LSU and all of our other colleges as well.

But HB 610 isn’t just about our colleges. It’s about our people and especially our children. Of all the collective negatives we possess as a state, the one we can least afford to continue mindlessly ushering forward is our inclination to overindulge in alcohol.

It affects and magnifies all of the others. From our nation-leading homicide, HIV and hypertension levels to our shameful rates for violence against women, alcohol abuse is a common denominator.

To be clear, there is just about no aspect of my life in which I am a teetotaler. HB 610 is no effort at holier than thou-ism. I just happen to believe we can do and be better than college-branded beer.

In his attempt to justify college-branded and sanctioned beer, Alexander ignores all of the college student specific data regarding underage consumption, binge drinking, alcohol fueled sexual and physical assaults, and instead argues that Budweiser and other major brands have been using purple and gold in their advertising for years without LSU ever receiving any financial benefit. If there was ever a statement from a college president that strikes a bitter and ironic chord with his students, then this should be it.

LSU and other colleges have been and continue to rake in billions of dollars from the blood, sweat, broken bones, and dreams of youngsters who are not even old enough to legally buy beer. The universities’ return is much higher than the tuition, room and board invested through scholarships. Yet these same young people cannot legally earn a single red cent from the tickets, television, tailgating and all the purple and gold paraphernalia that bears their names.

If logic leads Dr. Alexander to believe that LSU is currently being exploited and taken advantage of by the beer companies, then he should be honest enough to admit that colleges are doing the same thing to the underage youngsters who give their brands such high value and exposure in the first place, and then fight to justly compensate them in the same way he wants to cash in now.

A fifteen percent share of all the revenue generated from college sports that’s split amongst those who actually provide the sweat equity that makes it all possible sounds like the start of a fair deal. So if the king of LSU wants his cut of the beer money, let’s make sure the kids get theirs, too.

As dumb as this all is, Louisiana’s junior senator John Kennedy couldn’t resist the temptation to jump in and clobber the former Shreveport mayor and his goofy, zero-chance-of-passage bill…

“I am disappointed by state Rep. Cedric Glover’s efforts to end licensing agreements that LSU and ULL have made in order to mitigate years of state budget cuts.  Our universities are doing everything they can to survive while the state diverts more and more money each year to fund the Medicaid program and to pay for consultants.  Not only is Rep. Glover trying to stifle marketing strategies that are turning a profit, he’s begging for the NCAA to slap sanctions against us by suggesting that college athletes should receive financial compensation that clearly violates the rules.  It’s clear to me that Rep. Glover needs to channel his energy toward funding our colleges and fully funding TOPS.  In short, he needs to help the state stop spending more than it takes in instead of trying to financially cripple our great higher education institutions even more than they already have been.  I support the efforts by President Alexander and President Savoie to use scarce taxpayer resources as efficiently as possible and bring in extra money for our kids.”

We’ll see if this donnybrook escalates, or fades away. What we can say is Alexander, who seems to struggle to be on the right side of arguments, has found an opponent he can overmatch.