Mitch Landrieu tore down four iconic historic monuments to replace them with ill-conceived future proposals, and the Monumental Task Committee is one of the few organizations who has called him out on it.

Mayor Landrieu and the City Council have stripped New Orleans of nationally recognized historic landmarks.  Robert E. Lee stood atop New Orleans for 133 years as one of the most well respected men and military minds of American history until a politician with self serving motives launched a toxic crusade to rewrite the city’s history.  The Lee Monument was erected without the use of tax payer money–the same cannot be said for its removal using city resources, city employees, and a shroud of secrecy that’s more fitting to ISIS tactics than those of the United States of America.  With the removal of four of our century-plus aged landmarks, at 299 years old, New Orleans now heads in to our Tricentennial more divided and less historic.

The Monumental Task Committee has made several attempts to meet and discuss possible solutions with Mayor Landrieu’s administration.  As recently as last month, the MTC reached out to the Mayor and did not even receive the courtesy of a reply.

The Monumental Task Committee seriously questions the Mayor’s fountain proposal for Lee Circle.  The City has several fountain monuments that are in dilapidated condition.  The Simon Bolivar, Loewenberg, and West End fountains are eye sores that no longer even function. Refurbishing any of these deplorable, city-owned sites to become Tricentennial Fountain is a much more cost effective and practical idea.

Actually, what would be cool is if Mitch refurbished those three fountains and named each one for a century and had information about each century at the monument fountain.  That way people would go to each to learn about New Orleans.  And in another 100 years, they could add a fourth fountain.

The Monumental Task Force could have gone on.  Mitch Landrieu’s absurd proposals to replace these historic sites, two years in to it, prove how poorly thought out this process has been and continues to be.  The logistics of a soccer field at Lee Circle is purely laughable and so impractical it can only be Mitch’s field of dreams.  This is how well the Monumental Moron’s soccer field would fit in that space: 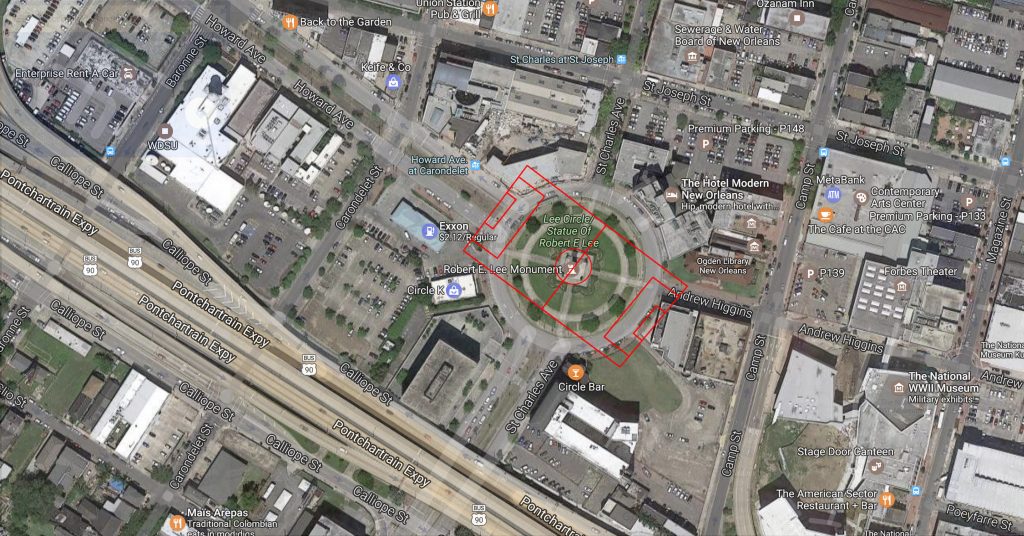