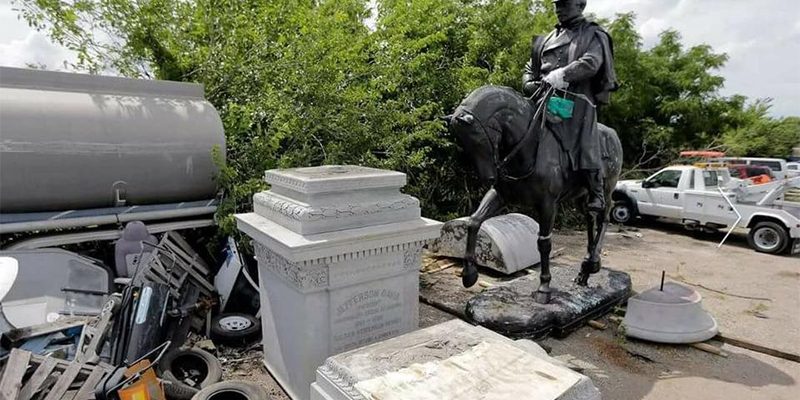 This one – the Beauregard monument takedown – hurt.

Of the four monuments targeted by New Orleans Mayor Mitch Landrieu for removal, I was hoping that the Creole soldier would’ve received a reprieve.

The leftists comprising the Know Nothing 2.0 Party falsely, scratch that, ignorantly used to scream via meme and all-cap social media posts that Jefferson Davis and Robert E. Lee had no connection to New Orleans.

Davis died in the Crescent City and for a brief period was buried here. His funeral procession through the streets of New Orleans was witnessed by thousands.

Before the Civil War, Lee was  stationed at Jackson Barracks.

All they had to do is a basic Wikipedia search to unearth these easily discoverable facts. But as we’ve seen time and again, the Left has as much contempt for truth as they do monuments.

However even the mendacious forces pushing the aforementioned lies on Davis and Lee couldn’t do that to Beauregard.

PGT Beauregard was a local boy, born in my home parish of St. Bernard, and lived most of his post military life in New Orleans.

Beauregard had a distinguished pre-Civil War life, graduating second in his class at West Point and demonstrating bravery and ability during the Mexican-American War (particularly at Contreras).

As an engineer he worked on clearing the mud lumps that obstructed maritime traffic at the mouth of the Mississippi River.

One of his lasting legacies was improving the uneven settling of the massive US Customs House at the foot of Canal Street, which currently houses the Audubon Insectarium.

And on the eve of the Civil War, Beauregard briefly headed West Point.

During the War between the States Beauregard emerged as the South’s first hero forcing the surrender of Fort Sumter and later commanding Confederate forces at the First Bull Run Battle.

Beauregard’s meteoric rise came to a quick end at the Battle of Shiloh and was thereafter assigned less grand postings, charged with defending Charleston harbor (where Union ironclads were repulsed) and the Richmond area at war’s end.

But there was another part of Beauregard’s life that hasn’t received much attention: political reformer.

And that’s the chapter that exposes what the monument bowdlerization crusade is truly about.

In 1858 Beauregard ran for mayor challenging the original Know Nothing Party, which was staunchly anti-immigrant. It was a controversial election and possibly stolen from Beauregard.

After the Civil War, Beauregard led a reform faction that promoted equal rights and unity between the races. The endeavor faltered but Beauregard’s efforts were no less commendable.

Beauregard invested his reputation and personal capital in an effort to build a better society.

You’d think that would have gotten him off the Mitch Landrieu hook.  But the mayor doesn’t seem interested in the details, which are inconvenient to his shoddy narrative.

Landrieu isn’t waging this civil war monument campaign for locals but to impress those outside of Louisiana. He has no political future here.

This is resume building for parts east.

And leaving one large Confederate monument standing, even for good reason, just won’t do, thus it must be cast upon the bonfire of his vanity.

If you discount all of Beauregard’s military exploits, he’d still be a man worth honoring. That the Take Em Down crowd scream about that he us clothes in his Confederate uniform is just an excuse- the great Creole could be dressed in white tie and tails and they’d still want him down.

It’s not about the Confederacy for this American flag burning goons who dare cry treason at the rebel banner wavers- it’s ultimately about destroying our Founding Fathers and then by extension the foundation of America, especially the Constitution and the Bill of Rights.

In their twisted minds, it’s all illegitimate.

General Beauregard is just a casualty in their civil war.