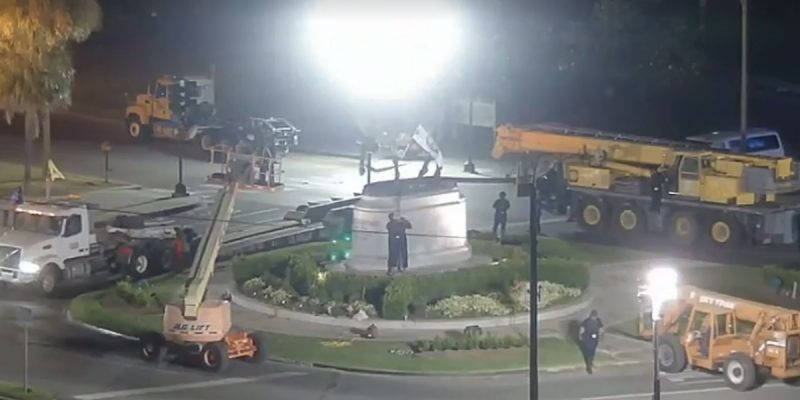 …standing guard outside a statue. That was the New Orleans Police Department’s primary occupation while the bullets were flying.

The cops stood guard for this…

It took practically all night for Mitch Landrieu’s masked men to finally pull the P.G.T. Beauregard statue off its base, after several failed attempts to lift it and some examples of what might be termed “post-industrial rigging” with Landrieu’s now-trademark yellow straps.

The crew of New Orleans firemen working on the statue violated what appeared to be countless safety protocols and had a private company employed them there is little doubt NOPD would have stepped in to stop the removal. Luckily, no one was seriously hurt amid a Charlie Foxtrot of a job taking the statue down and hustling it off to an undisclosed location where it will gather dust.

Meanwhile, this is what’s left of the statue’s pedestal… A large number of New Orleans police were on hand to separate the Take ‘Em Down NOLA people from the pro-monument people, and several arrests were made – one, of a pro-monument demonstrator who, after being showered with racial epithets by a man in an Angola Prison Rodeo t-shirt, hauled off and bloodied his nose, and another, of a woman who tried to burn a flag.

And while that spectacle was occupying the city’s law enforcement officers, carnage erupted on the streets.

Five people were shot, two of whom died, in five separate incidents in just over eight hours in New Orleans from late Tuesday afternoon into Wednesday morning in the city of New Orleans.

The first shooting came around 5 p.m. when a man, who has not yet been identified, was found shot to death in the front yard of the Mount Kingdom Church in the 3700 block of Louisa Street around 5 p.m.

Just moments later a man was shot about three miles away in the 1800 block of Forstall Street. His condition was not known as of 6 a.m.

There is no indication that the two shootings were related.

Around 9 p.m., a man suffered a gunshot wound to the leg in an incident near the intersection of St. Claude and Alvar.

Police said when they arrived, they found a man lying unresponsive in the doorway of a home. The man was pronounced dead at the scene, according to NOPD.

A city with crime on the level of Chicago should have its leadership occupied with little else. Instead, New Orleans’ lame-duck mayor Mitch Landrieu is desperately trying to deface and bowdlerize its cultural patrimony in order to create some sort of legacy he failed to earn through governance.

A Hayride source with knowledge of Landrieu’s private life indicated to us yesterday that the mayor no longer lives at home and has moved in with his mistress, a former communications director for the mayor’s office named Devona Dolliole, and that Ms. Dolliole, who is black, has been a personal influence on Landrieu’s dogged efforts to remove the monuments. Our source also indicated that the monument removal has estranged the mayor from his father, New Orleans’ former mayor Moon Landrieu, who was described as “ashamed” of the campaign to bowdlerize the monuments. Further, Mitch Landrieu has been living out of his campaign account, which is illegal, and his recent fundraisers – last week there was one at the tony Palmer Avenue home of James Carville and Mary Matalin – to support a political action committee Landrieu has formed – are little more than pre-bidding for government contractors. As mayor of New Orleans Landrieu directs the non-profit Wisner Foundation, a massive charitable enterprise which can dole out large contracts for various kinds of work, and we’re told these fundraisers are the gate for which contractors might be considered for bidding on Wisner work to be let before Landrieu leaves office.

That’s what passes for leadership in a city which is tearing itself apart with violent crime.

But at least there was a brass band available to regale the crowd of gawkers as Mitch’s masked men destroyed a 102-year old landmark of public art.

Interested in more news from Louisiana? We've got you covered! See More Louisiana News
Previous Article WBRZ Unloads On East Baton Rouge COA Corruption Once Again
Next Article BAYHAM: A Night At The Barricades And A Farewell To P.G.T. Beauregard