Businessman Frank Stewart is continuing his attacks on New Orleans Mayor Mitch Landrieu over the monuments. This time, he took his attacks to Gambit Weekly, the unofficial journal of Uptown New Orleans.

MITCH LANDRIEU
THE DICTATOR MAYOR
WHY DON’T YOU BELIEVE IN OUR DEMOCRATIC PROCESS ?
YOU’VE PROVEN THAT YOU ARE A DICTATOR
BY NOT LETTING ALL OF THE TAXPAYERS DECIDE.

It’s hard to understand how an intelligent and capable leader such as you can be so selfish in this decision. What’s next? Are you going to remove Andrew Jackson, Joan of Arc, and the other icons in this 300-year-old city? All monuments represent significant leaders who at their time felt they were doing the right thing. You could have been a leader with an open mind and a willingness to change or compromise. You could have been a great Mayor. HOW SAD!

Robert E. Lee DID NOT believe in slavery. He did not join President Abraham Lincoln or others suggesting slaves should be sent back to Africa. He did not believe in secession. His father fought by the side of George Washington to create our country.

In 1861, U.S. Army Gen. Winfield Scott asked Lee to lead the Union army after Lee served as the commandant of West Point. Lee turned down that offer because he knew it would bring war to his family and state. Scott, who witnessed Lee’s bravery as a young soldier in the Mexican-American War, was not alone in recognizing Lee’s military skills. Modern European generals studied Lee closely.

Gen. Ulysses S. Grant and Gen. William Tecumseh Sherman were Lee’s enemies during the Civil War (though Grant fought on Sherman’s side in the Mexican War) and easily could have killed Lee and his family, but both knew he was the ultimate ally in healing the post-Civil War nation.

There is no sin against this man towards former African slaves, or fault for leaving the country of his forefathers to protect his family. After the Civil War, when others did not, Lee stood to join a single black man who entered his church for communion.

Michael Korda, biographer of Lee, Grant and Gen. Dwight D. Eisenhower, wrote, “It is hard to think of any other general who had fought against his own country being so completely reintegrated into national life.”

His is the story the good man tells his children. We should not have removed a monument of a man whom Grant conspicuously saved.

The paid advertisement in Gambit comes as Landrieu is looking to build on his national profile. He’s changed his Facebook page. 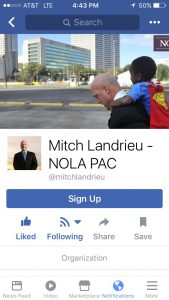 NOLA PAC is of course Mitch Landrieu’s anti-Trump scam PAC. That will be Mitch’s vehicle as he persues his national aspirations.

Mitch might be on his national self-congratulatory tour, but he’s leaving behind some angry residents.