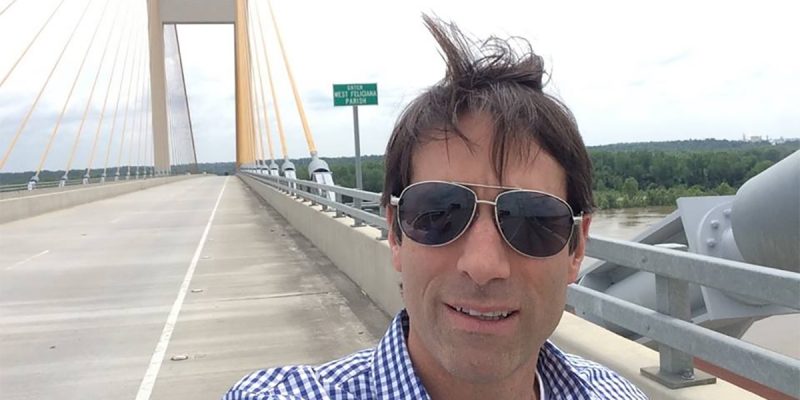 From the Congressman’s Facebook came a pretty brutal rebuke to the state’s Department of Transportation and Development, or DOTD…

View from the JJA Bridge connecting Pointe Coupee & West Feliciana Parishes (taken earlier this week). One or two cars crossed the entire time we were out there – we could have had a picnic or played some short-court tennis using the center line as an imaginary net.

Point is this bridge just doesn’t have significant volume, and it’s an example of the kind of poor infrastructure investments made when politics supplant data-driven decision making. If we’re going to make progress on our traffic issues in the Capital Region – which is an absolute must – we have to establish a framework that takes a comprehensive view of regional choke-points, identifies projects that will make the biggest impact at the best costs and that integrates technology is the design of better performing traffic systems.

The John J. Audubon Bridge was completed in 2011, under the state’s TIMED program which was supposed to use design-build bidding procedures to get transportation projects completed more quickly. It cost the state $409 million.

Graves’ criticism is correct, on a couple of counts – one of which is actually a validation of the bridge of sorts and a bit of a double indictment of DOTD.

First of all, here’s the Audubon Bridge on a Google Earth map… 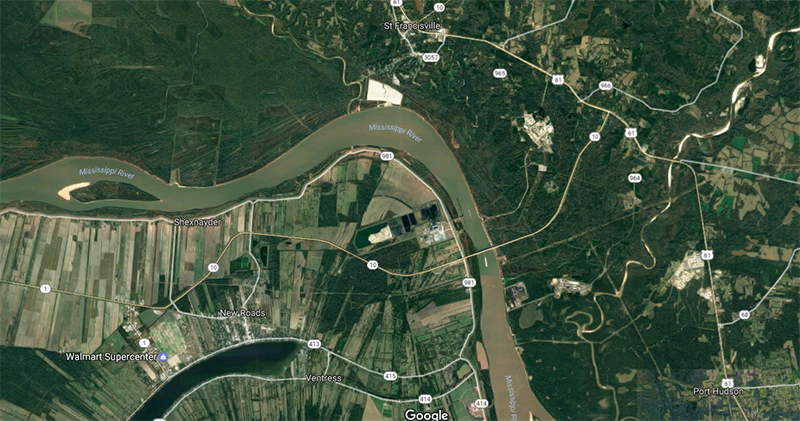 As you can see, it runs essentially from nowhere to nowhere – Highway 10, which peels off of Airline Highway (U.S. 61) to the east and south of St. Francisville, crosses the river into farmland to the north and east of Ventress and New Roads. The combined population of the three towns is about 7,600 people, and the combined population of West Feliciana and Pointe Coupee Parishes, which the bridge connects, is about 38,000. 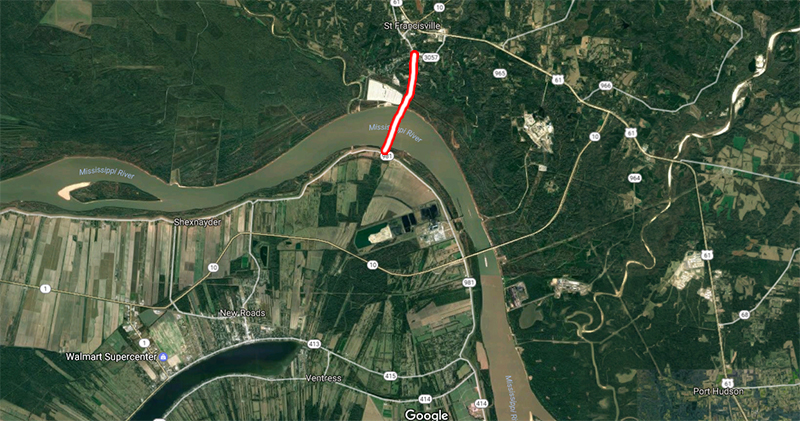 So it’s a loser – doubly so – in comparison to what could have happened had the bridge been built somewhere there was more demand. South of downtown Baton Rouge, at this point one bridge won’t even do – the parish presidents in West Baton Rouge and Iberville have been feuding for a couple of years over the proper site for a bridge when they should probably both have one.

But the other point is the real indictment of DOTD. The JJA wasn’t built to alleviate traffic; it was built for economic development purposes.

Has that worked? From an Advocate article back in 2015…

Cantrell, Pointe Coupee’s economic development director, said the parish already has experienced a 5.6 percent hike in sales tax revenue since the bridge’s opening, a number that jumps to 24 percent in New Roads.

Cantrell attributes much of that to the increase in traffic flow the Audubon Bridge has pulled into the parish’s new Super Wal-Mart and other new or expanded businesses.

Cantrell said the parish has also better positioned itself as a shovel-ready area for large industrial developments through the creation of six certified industrial sites on more than 4,000 acres of undeveloped land.

“With that Super Wal-Mart coming in, we’re noticing a lot of traffic come across the bridge into the New Roads area. When I see new faces, I ask where they’re from and about half a dozen tell me they live in West Feliciana,” he said.

As for the daily traffic being under original projections, Cantrell attributes that to the bridge opening nearly 10 years before it was originally supposed to open, in 2020.

“We never had a grand opening where we got all the press about it,” Cantrell said. “I think that hurt to some extent. Over time, people had to find it.”

West Feliciana Parish hasn’t reaped the same economic rewards as Pointe Coupee so far, but the bridge and a new business growth plan could soon change that.

“There are two perspectives that are really important to identify when talking about this,” said Bettsie Norton, West Feliciana Parish’s economic development director. “Has there been a lot of traffic on the bridge? No, there has not. Numbers don’t lie. But you have to understand the long-term perspective for the economic development strategy for our parish.”

There is no particular difference between two years ago and now. Nobody is building any major developments in St. Francisville or New Roads as a result of the bridge. So as an economic development incentive this isn’t an unquestioned winner by any means.

That said, it’s a fair point that the JJA isn’t built to facilitate economic development now; there isn’t enough population in Pointe Coupee or West Feliciana yet to move the needle. A 5.6 percent hike in sales tax revenue in Pointe Coupee Parish is the very definition of minimal, if you compare such a number with a similar increase in, say, Ascension or Iberville Parishes – not to mention East Baton Rouge.

The bridge gets about 3,000 or so cars a day going over it. Compare that with Highway 1 in Plaquemine, which does about 15 times that traffic. Does anybody really believe the economic development effects of a bridge to nowhere would outstrip those of a potential location where you could couple economic development with traffic alleviation to boot?

What’s worst about this is the JJA really wasn’t all that bad an idea. It isn’t a boondoggle like it’s been presented as; it’s a beautiful, terrific piece of infrastructure. And over the long haul it’s not a sure thing the projections which said by 2040 there will be 22,000 cars a day going over that bridge will end up optimistic (the bridge was supposed to be getting 4,000 a day by now, a number of which it’s short). It’s not that this bridge was so terrible, it’s that the other bridges which should have been built already weren’t. DOTD has some 4,700 employees and nobody seems to know what they do all day, and DOTD spends somewhere between 11 and 45 percent of its funding on actual roads.

This is a poorly-run agency. It’s been a poorly-run agency for a very long time, so it isn’t just John Bel Edwards’ fault. The difference is that Edwards and his DOTD secretary Shawn Wilson are running around the state demanding more gas tax dollars to fund the roads and bridges Louisiana should already have.

On Tuesday, Edwards’ gas tax bill will be heard in the House Ways and Means Committee. The governor will have to forgive us for lacking enthusiasm that DOTD won’t find a way to waste the proceeds of any gas tax increase. It’s what DOTD does.

Interested in more news from Louisiana? We've got you covered! See More Louisiana News
Previous Article BATISTE: This Is How 99.9% Of Monument Supporters Feel
Next Article One Man Is On A Mission To Improve New Orleans And Troll Mitch Landrieu All At The Same Time