It’s a budget built on the premise that Louisiana can only spend the dollars it takes in, and since Louisiana does a lousy job of estimating how many dollars those will be it’s a good idea to only spend about 97 percent of those dollars in case tax collections run short of projections like they always seem to do.

This is a relatively common-sense approach, normal folks would say. Which is why despite several hours of mostly Democrat members of the Louisiana House of Representatives throwing out amendments to the budget which would spend more money than the budget calls for, almost all of those amendments were defeated and the budget passed by a fairly wide margin.

But Gov. John Bel Edwards, who has spent the week on a public-relations warpath (both personally and through his minions) crying about all the horrible things that would happen if the House were to pass a budget that only spends the money Louisiana takes in, put out a release which would indicate that he’s lost any sense of composure he may have had on the topic of Louisiana’s budget…

In a statement released after the House vote, the governor accused Republicans of gutting health care, children’s services and veteran services to “levels that endanger the health and welfare of the people of Louisiana.” Edwards continued, “We can’t move Louisiana forward if we’re standing still. Despite their rhetoric to pass a ‘standstill’ budget, the House Republican leadership just rushed through a flawed budget that would send us tumbling backwards.”

The Jeremy Alford piece on the budget for the Baton Rouge Business Report is full of interesting nuggets of information. Like this one for example…

Much of the debate centered around the doubts House Republicans have about the $440 million budget shortfall that has been identified by the governor. Rather, conservatives see that deficit as a “wish list” for agencies and departments.

For example, Rep. Sam Jones, D-Franklin, attempted to float an amendment to restore $147,638 that the administration said it needs to keep certain veterans cemeteries from closing. The amendment was rejected, with Henry calling the threats of closures a “scare tactic.”

This is of a piece with the press conference Edwards’ commissioner of administration Jay Dardenne held Tuesday afternoon, in which Louisiana’s Department of Veterans’ Affairs secretary Col. Joey Strickland went ballistic over that $147,638, warning that two state cemeteries for veterans would close without that funding and if they were to close, Louisiana would then have to pay back a $10 million grant to the federal Veterans’ Administration given to incorporate them in the first place.

This wasn’t a particularly strong line of inquiry to begin with, and it took a pretty good hit earlier today when Mike McNaughton, who served eight years in at the Department of Veterans’ Affairs as the Veteran Outreach Director (he was there from November 2007 to January 2011, then left for a year to work at former President George W. Bush’s “Ride 2 Recovery” organization, then returned to DVA in December 2011 and remained until January of 2016), posted this on his Facebook… 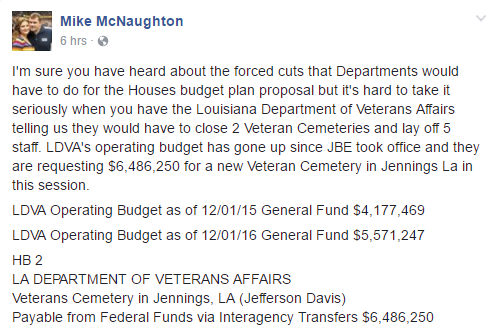 That’s just one example of how aggressively the Edwards administration is employing the old Washington Monument Strategy. There is no fat in the DVA budget of $5.57 million that would cover a $147,000 cost to keep those cemeteries open, they’d have you believe, and so the state would have to go on the hook for a $10 million back-charge to the VA. Any level of scrutiny of such claims tears them to shreds immediately, and yet here comes the smoke-and-mirrors attack on the House’s budget.

Another bit from Alford’s piece, which should be read in full…

As the debate came to a close, Speaker Pro Tem Walt Leger, D-New Orleans, complained that the budget cuts required under the Republican plan would “punt” the tough decisions—meaning where to place those spending reductions—to the Edwards administration. He suggested that the Appropriations Committee needed to meet again to be more specific.

“I’m miffed that we don’t have a more specific set of cuts,” Jones added.

It’s interesting Leger should offer that complaint, because it’s an echo of a challenge Edwards issued to House Republicans at the beginning of the session – to the extent that if they weren’t willing to support the large-scale tax increases he was demanding to fund his half-billion dollar budget increase then they were honor-bound to present a specific plan for restructuring the state’s budget.

But when Henry and the House Appropriations Committee did include some specifics before passing the budget to the House floor, Dardenne’s chief complaint was that those specifics, chief among them being to direct several state agencies not to fill dozens or even hundreds of open positions budgeted but not filled (often for months and years; how important are those positions, really?), constituted “micromanagement.”

A Hayride source told us today that the Senate was trying, ultimately unsuccessfully as of this afternoon, to broker a deal with the House for more of this “micromanagement” in directing specific cuts, and Speaker Taylor Barras backed away from such a deal. The Senate’s complaint – and it should be understood that where the Senate’s leadership is concerned they might as well be speaking for Edwards given the outsize influence Senate President and Edwards flunky John Alario has in that body – is the same as Leger’s. They want the House to take the political consequences of budget cuts.

Except when your response to a standstill budget, which means the House is authorizing you to spend the same amount of money you had a year ago, which was more money than you had the previous year, is to regale the public with horror stories about disabled children left in the bayous to die and the loss of college football on the state’s public campuses, you don’t get to whine about anyone else’s bad faith. What the House is willing to do is to direct Edwards and Dardenne to spend money to protect funding priorities like disabled kids while cutting in places the public won’t feel, and in some respects this budget does that (“micromanagement,” don’t you know) – but by giving the administration the responsibility to make the cuts they’re telling Edwards that it’s up to him to make sure the worst of his doomsday scenarios don’t happen based on the funding he has, and if he can’t prevent those then it’s his own damn fault.

After all, none of these scenarios happened this year when the state agencies had the same funding the House is budgeting for them next year. If they do happen, it means the management has gotten worse. Why shouldn’t Edwards be accountable for that?

One final thing – as Alford mentions in his piece, this budget passed on the House floor before a single tax measure even made it out of committee. What does that mean? It means this is all the money the House is going to give the governor. They’re not going to pass any tax increases, or at least not any of note. That might change, though at this point it looks very unlikely.

The effect of this, as the budget goes to Alario and the Senate, is there is very little ability on the Senate side to put money back into the budget. It has to be balanced according to the state constitution, after all, and therefore if the House won’t pass any additional revenue measures the Senate would have to rely on the old standby one-time money and accounting tricks to grow the budget. We’re told over and over again that Bobby Jindal spent down all of Louisiana’s reserves and therefore this can’t be done – well, if that’s true, then the budget that just passed the House is pretty much the budget Louisiana will have. There is no more money to spend.

We’ll see what happens. But so far it seems apparent that Louisiana’s House of Representatives has declared its independence and might find itself in full control of the state’s purse strings – if it will only hang together to the finish line.