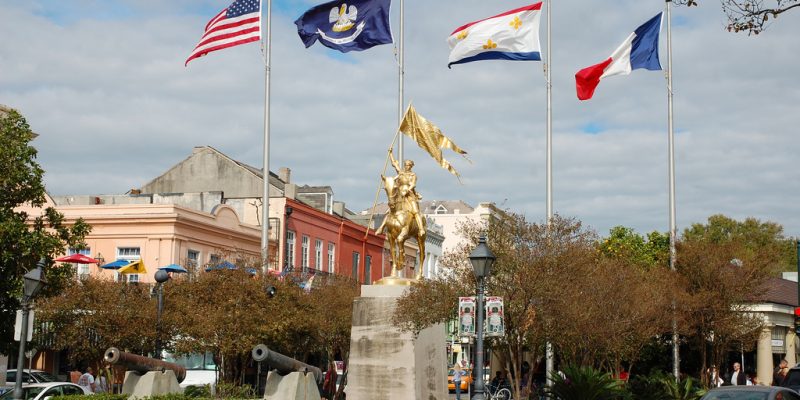 Last night, the Joan Of Arc statue in the French Quarter was vandalized. Some punk spray painted “tear it down” on it.

On Wednesday night (5.3), a shocking new development was made in the city’s ongoing issue with the monuments when French Quarter residents and workers discovered that the beloved Joan of Arc statue was vandalized by unknown perpetrators.

The preservation of the city’s monuments has been an going issue in New Orleans, with residents taking divisive stances regarding whether a group of Confederate statues should remain installed around the city or moved to museum facilities.

The vandalization was a shocking new development — up until now, most of the strife was centered around the community trying to stop the City of New Orleans from th massive take down project.

This symbolic offense touches on another part of New Orleans’s vast history: the connection to France. The golden bronze statue is installed in the heart of the Quarter at the Plade de Frace near the French Market, gifted by France to the citizens of New Orleans in 1972.

Here is a picture of the defaced monument, courtesy of NOLA Defender. 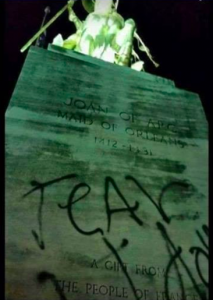 Now the Joan of Arc statue would not be a statue that you would think would be controversial. After all, Joan of Arc is a woman and she didn’t own any slaves.  Her statue was not on the list that Take ‘Em Down NOLA circulated in March.

The people who support Take ‘Em Down NOLA are morons. They want to erase all parts of history and even cultural ties they don’t like. They want New Orleans to deny its European heritage in order to make these people feel better. What comes to mind is the communist Khmer Rouge declaring “Year Zero” in Cambodia before turning them into the “killing fields.”

The reason why I  opposed removing the Confederate monuments in New Orleans was because I knew it wouldn’t stop at Jefferson Davis and Robert E. Lee. I hate to say I told you so, but…..

Interested in more news from Louisiana? We've got you covered! See More Louisiana News
Previous Article UPDATED: Can We Agree That Flying Confederate Flags At The Louisiana Capitol Is A Dumb Idea?
Next Article The House Has Passed Its Standstill Budget By A 63-40 Vote, And The Governor Is Apoplectic