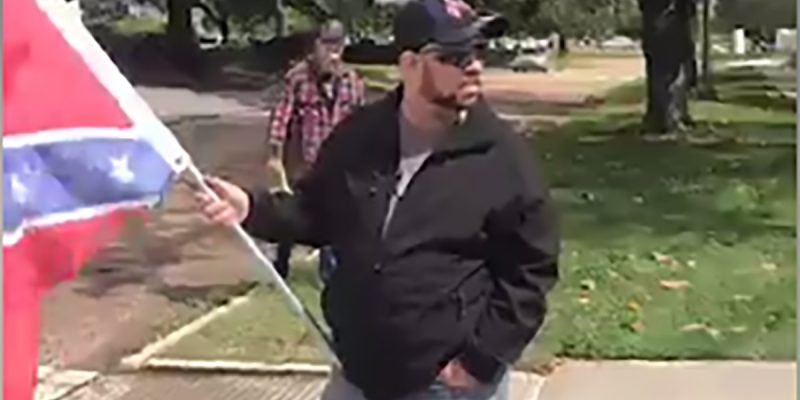 UPDATE #2: The flaggers left and went back to New Orleans, which is a good thing.

But not before Arthur “Silky Slim” Reed, the chief local promoter of the Alton Sterling riots last year and a member of the mayor’s new “citizens’ advisory board” on police practices (he’s a former gangster and now a community activist), put up a video making all of our points for us by warning that “the KKK is at the Capitol.”

UPDATE: Sure as shooting, there are now uniformed New Black Panthers facing off across the street from the confederate flags crowd. The national chair of the New Black Panther Party, a woman named Krystal Muhammad (whose actual name is Krystal Sonia), was arrested Tuesday night outside of Baton Rouge police headquarters as she and several others attempted to block Airline Highway, illegal firearm in tow.

So yeah – now we’ll have a tinderbox at the State Capitol, and all hell could easily break loose.

ORIGINAL: The people who have been standing in defense of the embattled monuments to Jefferson Davis, P.G.T. Beauregard and Robert E. Lee over the past several days, confederate flags in hand, and paying a price for it with some truly atrocious treatment at the hands of Antifa punks and snowflake drunks from Tulane and Loyola (most of our readers know about what happened Monday night), decided to make a side trip today.

They’re hanging out at the Louisiana capitol, “flagging.”

This is somehow going to help build support for HB 71, the bill which would help to protect those monuments from New Orleans mayor Mitch Landrieu’s efforts to tear them down. At least that’s what the people holding up confederate flags outside the Capitol seem to think.

Do we really have to outline all the reasons why this is a dumb idea?

First of all, Baton Rouge has its own racial/”social justice” tensions going on with the Alton Sterling decision from the Justice Department which came down yesterday. Yesterday’s rains wiped out the immediate reaction on the part of the Black Lives Matter crowd, but the entire town is worried about what happens this weekend when the “tourists” show up for whatever protests they’re planning, and whether those end up devolving into the kind of civil unrest we were treated to in Baltimore and Ferguson. Introducing more out-of-towners who run around the state capitol flying Confederate flags will have no positive effect in ratcheting down potential violence.

Is it really so tough to imagine the people stepping to microphones in front of the Triple S convenience store in North Baton Rouge where Sterling was shot 10 months ago would connect those flags at the Capitol to the shooting and indict “white” Baton Rouge as a town full of racists itching to kill young black men? Of course that’s rubbish, but the Black Lives Matter crowd sustains itself with lies and demagoguery all the time. It destroyed Ferguson over “Hands Up, Don’t Shoot!” as a slogan, despite that being a demonstrable lie. That the confederate flaggers are from out of town, and that some of them happen to be black, is not going to upset the narrative in the least.

Not to mention there is this.

Second, you are not going to improve the chances of passing HB 71 by bringing confederate flags to the Capitol. As we noted earlier this week, the best way to sell protection of those monuments is not with a confederate flag…

It ought to be said that neither side is particularly angelic, either with respect to the monument fight or the Sterling matter. Last night the preservationists who could easily have found themselves at an Alamo-style disadvantage didn’t do themselves too many favors; while they weren’t the aggressors in the hostilities that took place at the Jefferson Davis monument, brandishing a bunch of confederate flags to go with Mississippi and Alabama accents as they did was stupid. The persuasive case for preserving the statues to Davis, P.G.T. Beauregard and Robert E. Lee isn’t made with a confederate flag, as those three figures offered more than just four years of rebellion against the Lincoln administration. Davis, Beauregard and Lee are figures of American history, and as such the people resisting the bowdlerization of their statues ought to have been flying American flags.

Lee and Beauregard, after all, signed loyalty oaths to the union after the war in 1865 – though Davis never did. Beauregard’s was especially eloquent…

“In taking up arms during the late struggle (after my native state, Louisiana, had seceded) I believed, in good faith, that I was defending the constitutional rights of the South against the encroachments of the North. Having appealed to the arbitration of the Sword, which has gone against us, I accept the decision as settling finally the question of secession & slavery – & I offer now my allegiance to the Government of the United States, which I promise, truly and faithfully, to serve & uphold hereafter, against all external or internal foes.”

One of the stupid things said by New Orleans mayor Mitch Landrieu during this controversy was that the monuments he’s trying to take down are an “aberration” or a “denial” of history, since the Confederacy only lasted for four years. But Davis had been a U.S. Senator before the secession in 1861. Lee and Beauregard were heroes in the Mexican-American War. Lee’s efforts at bringing the South back into the union were lauded on both sides of the Mason-Dixon line following the war, which was the reason Lee Circle was so celebrated when it was constructed in 1878 (and the statue was crafted in New York, of all places). Beauregard played a substantial role in the post-war history of New Orleans, not the least of which was his having designed what ultimately became the city’s streetcars. Their influence on the culture of New Orleans and the South greatly transcends the four years between 1861 and 1865. But the people waving confederate flags around are poisoning the case that those historical monuments represent more than mere slavery.

And what we do not need is a bunch of confederate flag-waving out-of-towners coming up to Baton Rouge and goading the Alton Sterling protest crowd into a rumble.

It’s not marketable to answer the social justice criticisms of our American status quo by introducing a rebel flag that reminds the social justice warriors of the country’s racist past. What is needed are American flags reminding us that (1) that history of the Confederacy is useful to learn from, (2) that separatism along geographic and demographic lines was tried and failed in this country, (3) we’re all in this together and (4) we need to learn to participate in the process and work together if we’re going to make things better, rather than being stupid and tearing things down.

But some people are going to do what they damn well please, regardless if it’s helpful. That’s true of the people spewing vitriol at the Triple S, and it’s true of the flaggers and their Facebook Live broadcasts outside the state capitol.