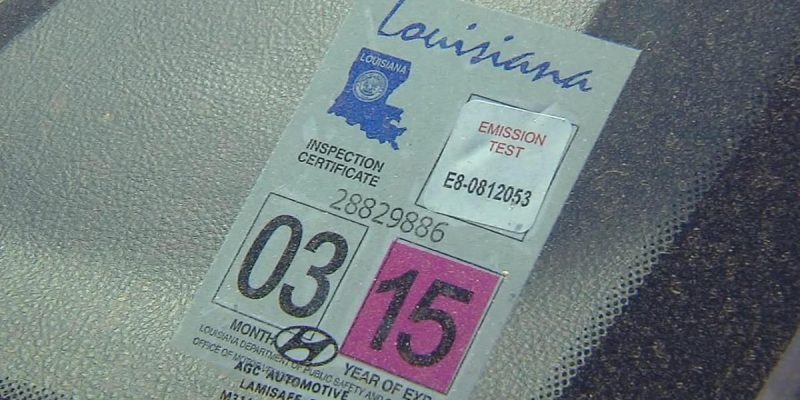 You really can’t get a better indication of the diverging directions of state policy on opposite sides of the Sabine River than how the state legislatures in Texas and Louisiana are handling vehicle inspection stickers.

As everyone knows, those inspection stickers are a waste of time and money for average citizens. Most of what those inspections cover can be identified by a police officer doing his job – brake lights out, cracked windshields, broken headlights and the like are all recognizable and will get you a warning if not a ticker – and the vast majority of the vehicles on the road will self-identify the rest thanks to the fancy electronics packages they carry.

Texas being one of them.

In Tyler, one of the last full service gas stations around stopped offering vehicle inspections awhile ago.

“The reason we stopped is that the inspection had begun to encompass things that weren’t even part of vehicle safety,” Donnybrook Automotive owner Gary Stewart said.

He says as the check mark boxes started getting longer, it became too much for the garage to handle.

He says the average inspection went from five minutes to ten minutes to 15 then 20. And with newer modern cars on the road, some of the inspection process became obsolete.

“Safety equipment once had to be visually inspected,” he said, “but now if there’s a problem, multiple types of alerts will let you know there’s a safety issue.”

We’re told by our friends at the Texas Public Policy Foundation that SB 1588 in Texas has a positive prognosis in the House Transportation Committee there as the legislative session moves forward, and should the bill make it to the House floor it’s likely to pass. Gov. Greg Abbott is certain to sign it, should it arrive at his desk.

But today, a similar bill in the Louisiana died in the House Transportation Committee.

A move to shelve the proposal permanently cleared the House Transportation Committee without objection.

The measure, House Bill 597, would have ended the requirement that motorists have their cars and trucks checked yearly or every other year, depending on where they live.

Instead, motorists would essentially do self inspections, then send forms, and $10.50, to the state Office of Motor Vehicles saying the vehicles met windshield, brake and other regulations.

State officials would then mail forms, which driver’s would keep in their vehicles, that said the owner complied with state law.

Rep. Larry Bagley, R-Stonewall., sponsor of the bill, said Louisiana is one of just 13 states that has motor vehicle inspection laws.

Bagley said his legislation would also end what  he called a $6 million per year industry in fraudulent stickers.

But state Rep. Terry Landry, D-Lafayette, former superintendent of State Police, said while he understood Bagley’s aim the bill was the wrong way to go.

“I think we are sacrificing safety,” Landry said of eliminating current rules. “I just fundamentally disagree with your bill.”

Meanwhile, the State Police, who at this point thanks to recent revelations about its top management is struggling with credibility to speak as a protector of Louisiana’s citizens rather than as an exploiter of them, opposed the bill on the basis that if your inspection sticker is expired it means your vehicle is unsafe…

Louisiana State Police Capt. Greg Graphia told the committee that, under the current law, vehicles have to undergo evaluations at least once every two years.

Graphia said that, when State Police see that a sticker is expired, it often means the car or truck has a serious problem or the driver lacks the insurance needed for renewal.

Or maybe the people are just busy, and regard having to pay $18 in cash for the privilege of waiting a half-hour at some car repair place to not have their car repaired – only on a sunny day, by the way, because if it’s raining there can’t be vehicle inspections – as a waste of time and money and don’t prioritize it.

In one state, the politicians are doing what they can to get government out of the way of ordinary citizens. In another state, they’re so committed to forcing you to pay for vehicle inspections stickers any kind of reform on that score is dead on arrival.

Stefanski is better than Jack Montoucet, who he replaces in that House seat, and Jay Suire, whom he defeated in the recent special election. That says very, very little.