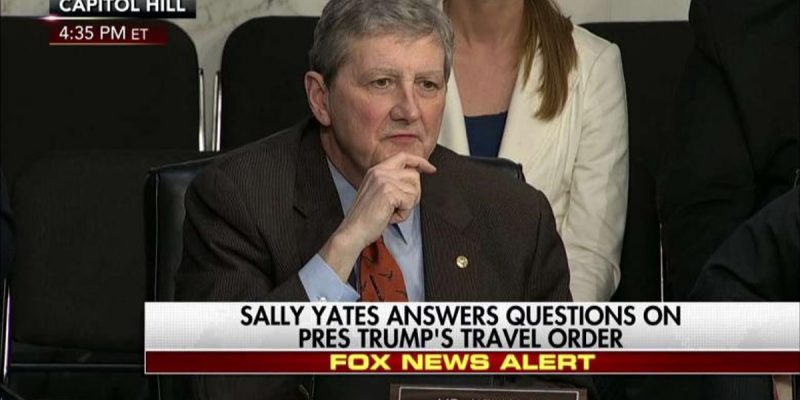 Kennedy identifies a key question that was fairly central to today’s hearing at the Senate Judiciary Committee which generated so much drama – namely, what makes an executive order unconstitutional? What Kennedy is getting at when he drops the bomb on Yates is that executive orders are presumed to be constitutional, and underlings don’t really have the right to refuse them on that basis. What they have the right to do is to resign rather than carry them out, which Yates didn’t do – but it isn’t proper for her as a matter of partisan politics to grandstand and declare them unconstitutional and thus refuse to carry them out.

Kennedy, despite dropping that rhetorical bomb, is rather polite to her in pretending to believe she’s sincere in her statements about how she wrestled with the decision how to handle Trump’s order. She isn’t – she wanted to do damage to the administration, and this was her chosen method of doing so.

Still, it’s a fun two minutes of video in which Kennedy belittles Yates for childish behavior while making a very good point – that the president’s employees are not the arbiter of the constitutionality of his executive orders; they can advise the president as to the constitution and they can resign rather than to carry out his orders, but they are out of place in attempting to prevent his actions. He is, after all, elected by the American people. So was Kennedy. Nobody ever elected Sally Yates.

BOOMSen Kennedy to #SallyYates: "Who appointed you to the Supreme Court?"

Interested in more national news? We've got you covered! See More National News
Previous Article Denise Marcelle Makes An Ass Of Herself At The COA Press Conference Today
Next Article Tasha Clark Amar Is Doing More To Create St. George Than Anyone Else