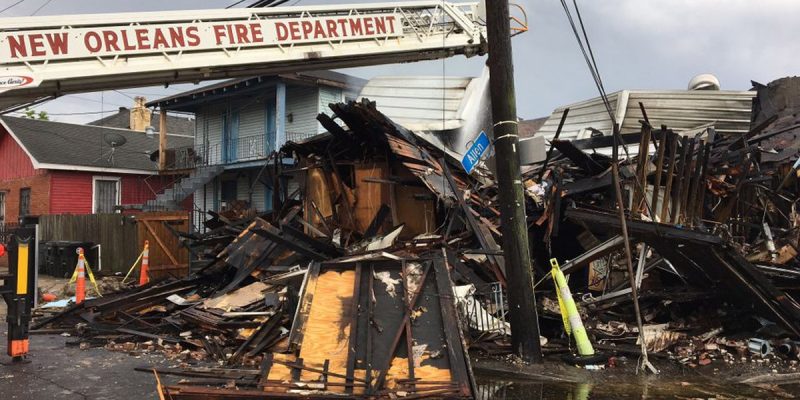 Unlike everything else it seems we’re posting over the past few days this is not a post about monuments. It is about New Orleans, though, and it’s an indication that city has problems taking monuments down probably won’t fix – when a local grocery store burns down and the neighbors promptly pick through the rubble to loot the place and the looting makes its way to the internet thanks to a local TV news reporter, it’s a perfectly good indication where New Orleans is.

WVUE-TV Fox 8 New Orleans’ Rob Masson post this on his Facebook, and it’s going viral. Over 300,000 views in just a few hours.

Brooks Grocery was a fixture in New Orleans’ Seventh Ward, occupying the corner of Allen and North Dorgenois Streets, not far from the eastern I-10, 610 split. That’s an atrocious neighborhood, and looting a burned grocery store is the least of what can be expected of the locals – what’s far more common is bloody murder amid the ubiquitous gang warfare raging in its streets.

It was engulfed in a four-alarm blaze which consumed not just the store but the apartments above it.

Dozens grabbed what they could, in the charred remains of the store.

Brooks Grocery caught fire around 11:15 p.m. Saturday, and by 12:30 a.m. Sunday, it had escalated to four alarms, with nearly 70 firefighters on scene.

I don’t know what to say I’m just worried,” said Kim Thomas, who couldn’t believe what was happening.

Thomas tried to escape the flames, as they moved to her own apartment next door.

“That’s how our apartment got flooded, they had to go in our house to reach the fire, it was a mess, and it’s even worse now,” said Thomas.

Hours later, she cowered in fear, as the looters took whatever they could.

“This here has me upset, I don’t know where to go, and what to do. I’m still waiting on Red Cross,” said Thomas.

“My whole store is going, so I’m not worried about any inventory,” said store owner Saed Hammad.

At least the place was insured, so Mr. Hammad, who leased the building, will now be able to get the heck out of that neighborhood.