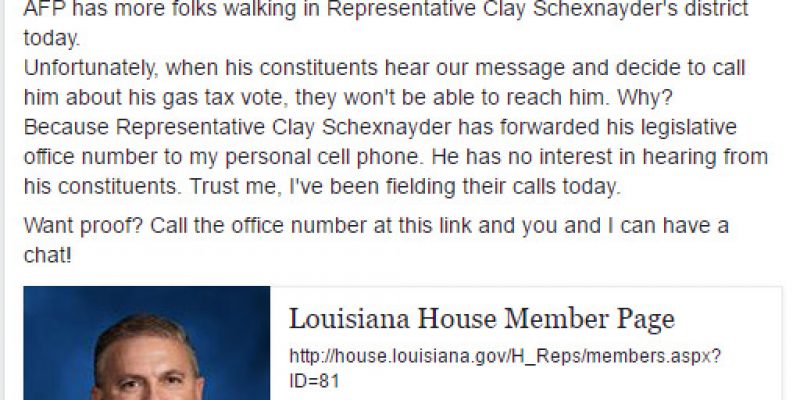 Our readers might recall that state representative Clay Schexnayder (R-French Settlement) was one of four Republicans who voted for John Bel Edwards’ gas tax bill to survive the House Ways And Means Committee and advance to the House floor last week. This was a vote which has generated a large amount of heat for Schexnayder and the three others – Reps. Barry Ivey, Paula Davis and Julie Stokes. So much so that at Saturday’s Republican State Central Committee a resolution was passed, after a heated debate, expressing “disappointment” in those four House members and opposing the bill.

Ivey spoke at length at that meeting, outlining that his support for the bill was contingent on its having been tied in with bills he’s brought demanding accountability of the Department of Transportation and Development’s spending. This wasn’t persuasive with the Republican State Central Committee, largely because most of the members don’t think any of the prophylactic measures Ivey is touting will survive either on the House floor or certainly not in the Senate. The general feeling is that the bill will be amended so that it’s a pure gas tax without much accountability at all, and the projects that tax is funded will be chosen by Gov. John Bel Edwards according to his political criteria – namely, that Edwards will now have the funding for road construction projects in his back pocket which he can use to extract votes from legislators on other bills he wants their support for.

There was another amendment for that bill, though, and it was brought by Schexnayder as his own condition for voting for it. Clay Schexnayder already has a reputation for delighting in terrible legislative ideas, and amending the gas tax to make it worse by allowing legislators to “pork it up” by deciding their own projects rather than having them be dictated by Edwards fits right in with that reputation.

Here was Americans For Prosperity’s take on Schexnayder’s amendment…

Americans for Prosperity – Louisiana (AFP-LA) is sounding the alarm on an amendment to the gas tax increase which will create a transportation slush fund.

On Tuesday, the Ways and Means committee voted to approve an amendment that would set up a lawmaker-slush fund system for transportation spending. Legislators gave themselves the authority to unilaterally decide where gas tax dollars are spent in their districts. While this provision contains some safeguards, there is still significant risk for decisions to be made to benefit political cronies rather than the district, parish, or state as a whole.

This amendment is number two in a set of Ways and Means committee amendments found here.

Americans for Prosperity – Louisiana State Director John Kay released the following statement: “Adding a transportation slush fund to an already bad bill is an invitation to abuse and cronyism.  Decisions about where our transportation dollars are spent should be made in the light of day. While AFP -Louisiana will remain opposed to the gas tax increase in general, every attempt should be made along the way to ensure accountability and credibility in the transportation funding process.”

AFP this weekend had people walking neighborhoods in Schexnayder’s district (and the others as well) letting folks know about his vote and the amendment and just how bad it is.

AFP also was encouraging people to call Schexnayder and voice their opinions about the gas tax – because, as the four leges in question and their defenders have noted, a committee vote is anything but a final vote, and sometimes legislators will vote to allow floor debate on a bill they don’t favor (feel free to believe that line of argument if you like). It’s like an indictment rather than a conviction, to make an analogy in criminal law.

It doesn’t seem like Schexnayder was overly exuberant. We can say that because this happened… 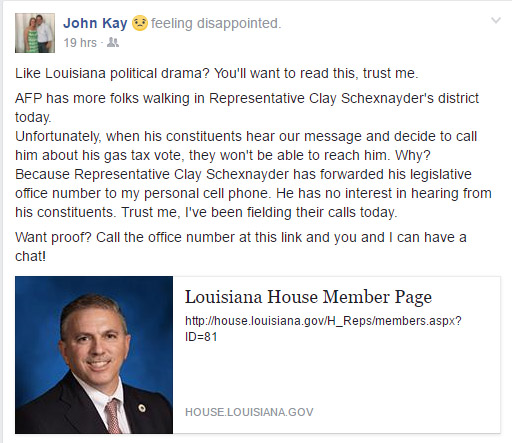 So that’s a practical joke and for “yuk value” it isn’t terrible, except it’s also a damn-fool thing to do.

Siccing the people AFP is siccing on Clay Schexnayder on John Kay would seem to have a little bit of symmetry to it and it’s certainly kinda funny, but think about how this works. These are people who are angry enough at Schexnayder’s vote that they’ve decided to call his office and complain – or maybe they’re for the gas tax and want to encourage him to keep supporting it – and rather than take their calls or at least let them leave him a message, he’s unloading them on a prominent critic of his?

John Kay gets paid to push an agenda which in this case is highly critical of Clay Schexnayder. To say it’s bad politics to deposit your constituents onto John Kay’s phone is an understatement of significant proportions. AFP has volunteers cold-calling people to advocate they get engaged on issues AFP cares about – the last thing you want to do if AFP is on your case is to give them more fuel for that fire by having people cold-call them.

Really, really dumb move, this. For all Clay Schexnayder knows, Kay will end up finding someone among those callers who’ll run against Schexnayder for his seat in 2019.

But then, we don’t offer Wonderlic or IQ tests for our state legislators. We get more than our share of dummies in those jobs. Very little that some of them do should be a surprise.