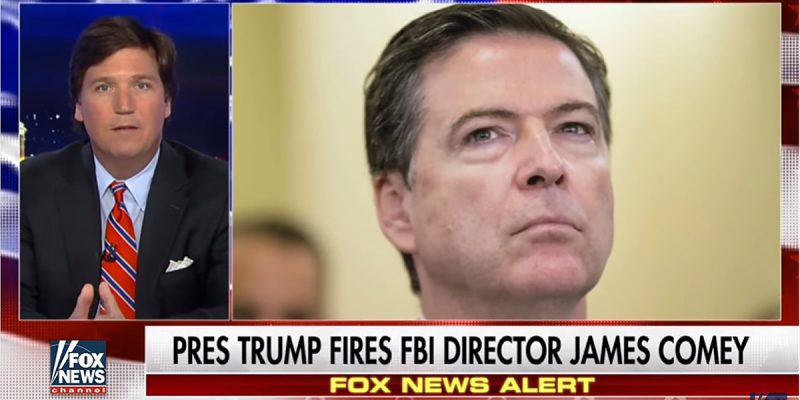 This is a very strong four-plus minutes of Carlson’s time on the air – a well-reasoned, measured and absolutely devastating takedown of James Comey as unfit for the job he held as FBI director.

Watch the whole thing, but especially look for the revelation at the end where Carlson notes that many of his guests within the official Washington world, as in members of Congress and current and former officials within the executive branch of government, were fairly outspoken about their distrust and fear of Comey based on his erratic behavior – but were not outspoken on camera with those concerns for fear of reprisals Comey might have delivered to them.

As a bonus, for those of you who might see it that way, I have a column on the Comey firing and particularly the Democrats’ reaction to it personified by the ridiculous Sen, Chuck Schumer, which just went up at the American Spectator. An excerpt…

The fact is, James Comey’s tenure as FBI director came to a functional end the minute the word leaked that Loretta Lynch met with Bill Clinton on the tarmac at the Phoenix airport. Comey was left with no plausible way forward in his job as soon as that happened, as the number one most significant investigation his agency was conducting, namely that of Clinton’s emails, had been effectively closed down by the Attorney General.

What Comey should have done at the time was resign in protest. He could have done so and preserved his professional soul, and the resignation would have accomplished precisely the same mission — castigating Clinton for her conduct without initiating a prosecution for it (a prosecution that Lynch’s meeting with Bill Clinton made clear would not be forthcoming) — as his press conference. Comey wouldn’t have had to say a single word about Hillary Clinton; his resignation in a one-page letter citing Lynch’s ex parte meeting with Bill would have spoken more loudly than 2,000 words at the podium.

But his careerism got in the way of his professional soul, and as such there was no saving his future as FBI director. Had Clinton won the election there was no doubt Comey would be fired; Trump’s election was no different, as Tuesday’s events showed. And no, Comey was not fired because of The Russians; there is no credible scandal involving The Russians despite the fact Rachel Maddow may have spent more than half of her broadcast time in the months of February and March pushing such a scandal.

That Comey had to go, regardless of who was in the White House, was obvious to people on both sides of the aisle. If anything, Trump was too slow making it happen (and by the way, what in the hell is John Koskinen still doing in the IRS Building?).

But Schumer’s antics open a window into something else that ought to be obvious to all, which is this: If your beliefs are solely driven by opposition to people you hate, your rationality and logic — and shortly thereafter, your credibility — will suffer horribly for it.

Schumer’s constituents might not get that. The rest of the country will. If this is the best he can do, he’ll be the leader of an even smaller Senate minority after the next election.