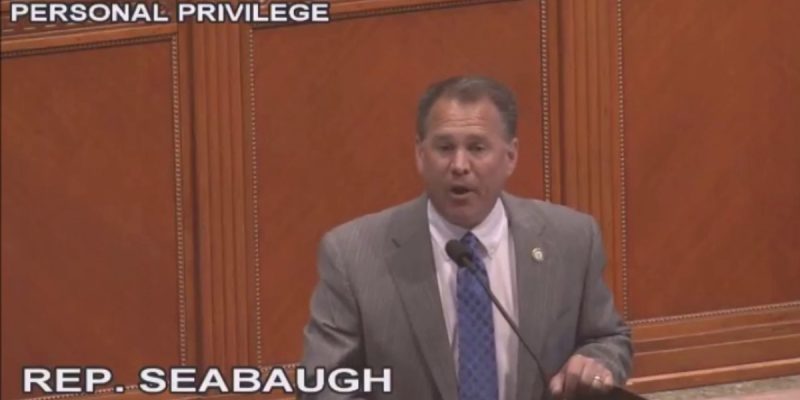 Our readers, we are pretty sure, will absolutely love this. It’s KEEL-AM’s recording of a speech by Rep. Alan Seabaugh (R-Shreveport) on the Louisiana House floor Wednesday evening in the aftermath of the failure of HB 632, the gas tax increase bill, after that bill’s author Steve Carter let loose a fusillade against the Louisiana Republican Party and Americans For Prosperity, among other opponents of the bill.

Alan Seabaugh was having none of Carter’s rhetoric, and he took to the microphone to give the House a piece of his mind about the efficacy of a tax increase bill widely disparaged by the public – and particularly the public in his district, to whom he was listening – and the Louisiana Department of Transportation and Development, the suggested recipients of the tax increase.

Seabaugh noted that perhaps DOTD could unload some of its surplus workforce, as in, 3000 of the agency’s 4700 employees, and apply the savings to road construction and maintenance since that work is done by contractors anyway. No punches were pulled and few in the room were spared in the making of this, which is so far the unquestioned high point of the entire session…

God bless Alan Seabaugh, and the voters who sent him to the Capitol. We need much, much more of this if this state is to be saved from the big-government rot under which it has suffered since Huey Long slinked his way off a Winn Parish dirt farm.

Word has it Seabaugh is considering a run for the state Senate against Democrat John Milkovich in 2019. If he does make that run, Seabaugh’s victory could be the single most important electoral achievement conservatives could earn in that cycle outside of beating John Bel Edwards in the governor’s race. As much as the House needs men and women like Seabaugh, the Senate needs them far, far more.