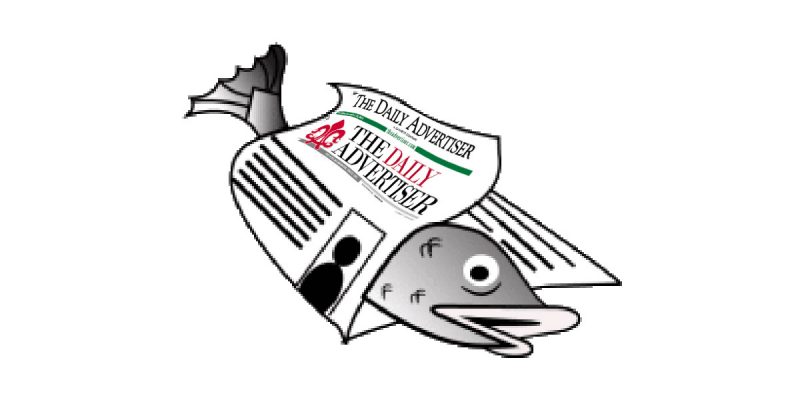 If you blinked, you might have missed a crazy editorial posted at the Lafayette Advertiser’s website Thursday afternoon which inexplicably called for the resignation of Louisiana House Speaker Taylor Barras, apparently because Barras didn’t force any tax increases through his side of the state legislature.

You might have missed it, because almost as quickly as the editorial, which carried the byline of the Lafayette Advertiser’s editorial staff and not the name of any individual writer (we’re told that Ken Stickney writes most of the Advertiser’s editorials, and the piece in question carried a photo of Barras with a photo credit to Stickney), went up on the website it was retracted.

Here’s the editorial, in full…

If the Louisiana voters need scapegoats — they don’t — for this spring’s legislative meltdown in Baton Rouge, they might stand on the state House of Representatives floor and point in any direction. Failure there has bred failure everywhere for the 2017 legislative session.

Louisiana voters do not need scapegoats. They need direction. They need solutions. They won’t get them from the people’s representatives, not without dramatic changes, or the next two years may be as frustrating and unproductive as the first two.

That change should start with Taylor Barras’ resignation as House speaker.

Barras, R-New Iberia, who was reluctant to accept the position, has not met its steep challenges. It may be no one could lead these 105 elected representatives, but Barras has proven he cannot.

Barras is a good man but a bad speaker. A new speaker and new committee chairmen would deal the House and Capitol a needed new hand.

Answers to Louisiana’s pressing problems will not come from this House as it is presently constituted. That much is proven.

Our tax system will stay broken. Our higher education system will remain imperiled. TOPS will stay on risky fiscal footing. Our roads will remain among the nation’s worst. The fiscal cliff lies straight ahead, and there are no brakes on this legislative bus.

Local lawmakers said before session’s start that voters should be able to vote for a gas tax. They won’t. Our lawmakers said the Taylor Opportunity Program for Students must change to survive. It won’t.

Lawmakers had the chance to grapple with the worst of our problems — Louisiana’s fractured tax and budget structures — in a special session but efforts introduced to meet that crisis also failed in the House.

The governor’s office and Senate, too, share blame for Baton Rouge’s dysfunction. Gov. John Bel Edwards’ last-minute embrace of a commercial activity tax at the session’s dawn — details weren’t delivered until the session was underway — provided more confusion than direction. The Senate blocked any reforms that might have better positioned TOPS for its future. Partisan gridlock was everyone’s problem.

Louisiana’s Legislature has even failed thus far to adequately advance an operating budget for next fiscal year. The governor has proclaimed the need for a special session to handle even this perfunctory but necessary chore.

Midway through this quadrennium, our elected state leadership has failed to present, pursue and pass a cogent, clear program. Usually, that’s accomplished by the first two years of their four-year terms, while the second two years are progressively consumed with re-election politics.

This legislature could slip out of Baton Rouge without accomplishing anything, save criminal justice reform. No one wants such failure.

Let’s reboot. Taylor Barras can take the first, bold step in that direction.

The Lafayette Advertiser editorial is utter and complete nonsense. Barras has given Louisiana what the state’s media has demanded for decades – the beginnings of an independent legislature. Unlike previous House Speakers who served as little more than lackeys of the state’s governor, Barras runs a body which is responsive to the will of its members’ constituents. The House majority has taken the position of the majority of voters polled on issue after issue, and the most prominent of those issues has been a strong aversion to take increases.

Barras, a former Democrat, is no particular hard-core conservative. He was a compromise choice between the Republican favorite Cameron Henry and the Democrat Walt Leger when neither could get a majority, though Barras operates in concert with Henry. As such, the House has adopted a fiscally conservative position emanating from Henry’s Appropriations Committee which puts it at loggerheads with Gov. John Bel Edwards and the Senate, which is most definitely not independent of the governor.

This is not the first time Barras has been assailed by the state’s newspapers. Just before the opening of the current legislative session the Baton Rouge Advocate published a piece by Tyler Bridges assaulting the Speaker more or less as a nincompoop controlled by others. As Bridges is widely reputed to be a habitue’ of Edwards’, the piece was taken as an attack by Edwards on Barras by many members of the House – and it contributed to the contentious nature of this session. Bridges’ particulars sounded an awful lot like the critique of Barras offered by the Louisiana Association of General Contractors CEO Ken Naquin in a vicious, bitter e-mail sent to his members after the gas tax bill died on Wednesday; the similarity makes things sound an awful lot like it comes from Edwards’ camp. The Lafayette Advertiser’s editorial echoes the same line.

And just like after Bridges’ hit piece, House members are furious about the Advertiser editorial. Rep. Nancy Landry, who hails from Lafayette, posted a fiery response after it was learned the piece had been retracted…

I am shocked and dismayed to read an opinion piece by the Advertiser Editorial Board calling on House Speaker Taylor Barras to step down.
It’s been a long time since I’ve read something so far off the mark.

What the Advertiser calls a lack of leadership, is actually Speaker Barras’ courageous stand against a Governor and his allies who are absolutely intent on spending as much money as they can year after year while continuously demanding that the legislature raise taxes to finance their spree. All this in a weak economy, when Louisiana families are struggling.

Louisiana State Government has grown faster than the economy for the last decade. This Governor increased spending by $2 billion just last year, while demanding tax increases. The people of Louisiana overwhelmingly believe our state has a spending problem rather than a revenue problem. The Governor promised to address spending during his campaign and at the outset of his term, but that turned out to be empty rhetoric. Until he fulfills that promise, there will be no progress on the budget.

The Advertiser serves a market that just voted down a new sales tax and even rejected renewals of millages for long-time priorities – the jail and the parish courthouse. It’s hard to believe that the Editorial Board of the Advertiser is so out of touch with the sentiment of the state and Lafayette Parish.

Perhaps the time has come for the editorial board of the Advertiser to step down.

“Speaker Barras has been under tremendous, unwarranted attack lately. I guess the saying ‘If you’re not making people mad, you’re doing it wrong’ is true. We’re living in uncharted territory for Louisiana–we have the first truly independent Speaker in modern history. Speaker Barras has shown a spine in his willingness to stand against bigger government. It’s not a surprise that some are calling for him to be gone. Republicans in the House support the Speaker, and we appreciate his stance and advocacy on our behalf.”

And Rep. Bob Hensgens, who hails from nearby Gueydan, still in the Lafayette Advertiser’s core market…

“Speaker Barras and the house are the only thing standing between a tax and spend Governor and the taxpayers’ wallet. Obviously the Governor and the liberal establishment are threatened by an independent house of representatives. This weak attempt at a fake news editorial shows desperation. So one last word for the Lafayette Advertiser editorial board – I’m sorry but the Louisiana House of Representatives is independent. We thought we showed the Governor last year who elects our speaker, seems you guys never learn.”

“The Daily Advertiser editorial board has asked Speaker of the House Taylor Barras to step down. This is absolutely absurd. While I don’t always agree with him, Taylor has been an independent leader for the members of the House. The editorial board suggests the Speaker has not led the House and nothing is getting done. However, the House recently adopted a budget that took an important step toward fiscal responsibility. Their budget didn’t rely on extracting more dollars from the taxpayers and slowed state government spending that has been growing faster than the economy can sustain. I applaud them for this bold and courageous effort and I say they have done something under the leadership of Taylor Barras. They have protected the taxpayers. This doesn’t set well with the elitists and the establishment. Philosophical differences will always be present at the Capitol and that is what freedom is about. Let the House decide who is Speaker and hold that person accountable and let the members of the editorial board find a new hobby.”

Then there was the Louisiana Republican Party, who came out in Barras’ favor…

Barras will, of course, not resign – and the attacks on him which are being attributed to Edwards are only going to make the House less interested in backing away from its current positions. They’re of a piece with a series of stupid and irresponsible actions by the Democrat Party in Louisiana upon its realization that Edwards simply is not going to be able to act as a dictatorial governor.