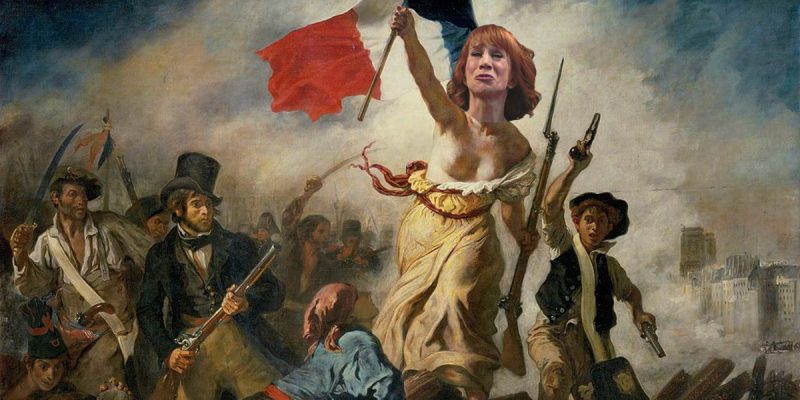 While attending the Trump Inauguration, I saw something curious on the facade of an office building. There above the entrance the word RESIST was cobbled together via poster board on the interior glass of the structure. It seemed so out of place in such a typically corporate looking structure. I would later see the word scrawled on hundreds of placards and shouted out by tens of thousands of protestors that would converge on the National Mall on January 21st. So was The Resistance born.

I pondered the anti-Trumps’ choice in self-identity and mission.

They didn’t call themselves the opposition or some similar sobriquet that implies their steadfast commitment to thwart the Trump Agenda.

The Left instead chose a word with violent and militant connotations, as most resistance movements don’t merely protest those in authority but fight the enemy with bullets and bombs.

Perhaps they envision themselves as suburban commando Che Guevaras in pussy hats and skinny jeans. In addition to resistance having a menacing edge, it also elevated one’s sense of self-importance.

The “everybody gets a trophy” society now allows the impressionable to pretend to be a part of the underground, all you’ve got to do is retweet stuff and be rude to congressmen.

One wonders if the resistance will model their organization titles along the lines of the Salvation Army or the Viet Cong.

I can see it now, aging hippies requesting to have “Colonel in the Anti-Fascist Resistance” included in their obituaries and chiseled on their tombstones.

Comedian Kathy Griffin recently made her pitch for a role in the revolution: mascot.

In a craven attempt to extract herself from the pit of irrelevance where she has wallowed, Griffin released a ghastly image of her coldly staring into a camera lens while holding the blood soaked decapitated head of the president.

Griffin was making a play to become the American Resistance’s Marianne, the female representation of the French people’s revolt against the monarchy.

It should be noted that along with the tricolour and Phrygian cap, decapitation was also a common trait of the French Revolution

To America’s credit, Griffin’s stunt was largely met with revulsion, disgust, and consequences, even if forced in some corners.

Griffin’s stand-up shows were cancelled and her annual New Year’s Eve hazing of Anderson Cooper got the guillotine as well.

After all, CNN has enough people on their payroll who insult President Trump with profane words.

In a separate attempt to salvage a livelihood, Griffin posted an apology video online before later lawyering up and declaring herself the victim of Trump.

I suppose her acting skills weren’t enough to convince the public about her sincerely, which is understandable as she once personally trolled the Palin family.

Griffin is irrelevant in the big picture. She’s just the most obnoxious member of an entertainment industry chorus relentlessly trashing Trump. Whatever speck of space she occupies will be filled by a fellow traveler.

But her act is very relevant.

As we’ve seen in the targeted shootings that claimed the lives of police officers after the villification of law enforcement by politicians and professional protesters, words matter.

When you create an irrationally-charged narrative, even if it’s intended for political theater, there are unstable people out there who will act upon such rhetoric, believing themselves to be avenging a terrible wrong.

Or perhaps as a self-identified member of say, I don’t know, the resistance.

We are not even a half year into Trump’s presidency and we’ve witnessed unprecedented vitriol and violent language aimed at Trump and his family.

Remember Madonna talking about blowing up the White House the day after Trump took office?

Decapitation posing and glib assassination fantasy talk doesn’t happen in a vacuum, especially when you’re a celebrity with hundreds of thousands of Twitter followers.

Griffin has had her defenders including the combustible Alec Baldwin, which only shows how unoffended the Left really was by her latest “look at me” antic.

Republicans are right to raise this matter as it reflects exactly how darkhearted and unhinged the American Left truly is.

And sensible society commentators have a responsibility to make a big deal out of this episode to dissuade other high-profile individuals from producing similar expressions of “art.”

Griffin, who has tweeted out her affiliation with the resistance, succeeded in becoming the face of it.

They deserve each other and the American public deserves to know precisely how radical and ugly the alternative to the GOP is.