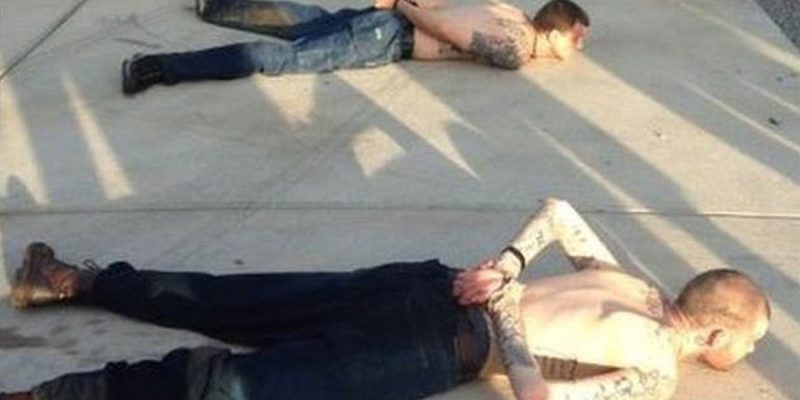 Despite the horrible news of the week, including the killing of two prison guards in Georgia and the attempted assassination of Republican congressmen in Arlington, Virginia on Wednesday it was a good week for the good guys with guns Wayne LaPierre often talks about.

Donnie Rowe and James Dubose are accused of killing two prison guards early Tuesday morning as they were being transferred between detention facilities southeast of Atlanta. After their escape, they spent two days on the run until they were spotted by Tennessee state troopers.

In the ensuing chase, Rowe and Dubose crashed their car and fled into the woods adjacent to Interstate 24. Eventually, they came upon a residence in the small community of Christiana, Tennessee and attempted to steal the homeowner’s vehicle.

Unfortunately for these accused murderers, the homeowner noticed that two people were trying to snatch his automobile. In fact, this homeowner was the worst nightmare for Rowe and Dubose. He was armed and unafraid to brandish his weapon. The homeowner, along with some timely help from a neighbor, held the pair under citizen’s arrest until the local sheriff’s department arrived to apprehend them.

This was just one of the many daily incidents of LaPierre’s “good guys with guns” stopping criminals from committing additional crimes. On Wednesday, as Republican congressmen were practicing for their annual baseball game against the Democrats, lunatic leftist James Hodgkinson entered the baseball field in Arlington and fired up to 60 shots from a high-powered rifle and a handgun, attempting to assassinate as many of the GOP elected officials as possible.

Hodgkinson was a volunteer in the presidential campaign of U.S. Senator Bernie Sanders (I-VT). He had a long history of posting hateful messages about Republicans and President Donald Trump on social media. He belonged to online groups such as “Terminate the Republican Party” and vowed to “destroy Trump.” He was a fan of MSNBC host Rachel Maddow and other leftist media personalities. Sadly, his hatred toward Republicans reached a boiling point on Wednesday morning as he attempted to assassinate as many as three dozen GOP congressmen.

Fortunately, one of his targets, House Majority Whip Steve Scalise (R-LA) is a member of the GOP leadership and was protected by two gun toting Capitol Police officers. These brave law enforcement officials engaged the gunman for ten minutes, eventually subduing him and eliminating the threat. While five innocent people were wounded and several of them, such as Congressman Scalise, are still suffering from serious wounds, the carnage would have been much worse if the armed officers were not there.

U.S. Senator Rand Paul (R-KY) was at the baseball practice and praised the “incredibly brave” response of the Capitol Police who “probably saved the lives of everybody there.” According to Paul, “had they not been there, it would have been a massacre.”

Sadly, despite the seriousness of the injuries to Scalise and others, Governor Terry McAuliffe (D-VA) wasted no time in trying to turn this tragedy to his political advantage. Regrettably, McAuliffe barged onto the scene in the aftermath of the shooting talking about gun control, advocating “background checks, shutting down gun show loopholes.” He did not even know or care about the specifics of this case, only that it was a good opportunity for him to promote the gun control agenda.

It would have been better for McAuliffe to spend some more time reflecting on the issue and preparing his remarks for he laughably blurted out that “we lose 93 million Americans a day to gun violence.” He even repeated this nonsense at the impromptu press conference before eventually realizing that he meant to say “93 people” a day are lost to gun violence, not “93 million Americans.” That’s the quality of the argument those who villify LaPierre and the NRA have on offer.

The real lesson of both tragedies is not that we should implement more gun control and please liberals like McAuliffe, but that our leaders should encourage the expansion of gun ownership in America. Thankfully, in our country, unlike the United Kingdom and France, our police carry firearms. We are also fortunate to have enshrined in the U.S. Constitution the Second Amendment, guaranteeing our right to bear arms, providing the most comprehensive guns rights of any nation in the world.

While liberals lament our “gun culture,” the real story of the week is that guns, in the hands of the right people, save lives. The more people who become trained in the use of firearms and purchase them for personal or home defense, the more likely it will be for unhinged gunmen like Hodgkinson or prisoners on the loose, like Rowe and Dubose, to encounter law abiding Americans who will stop the bloodshed. This will result in the lives of more innocent Americans being saved and more dangerous criminals meeting the fate they deserve.

For all the demonization of the NRA on the part of the Left, last week gave us a lot of evidence Wayne LaPierre had it right.

Interested in more national news? We've got you covered! See More National News
Previous Article BAYHAM: The Aftermath Of The Scalise Shooting And The Shameless “Resistance”
Next Article HARTMAN: It Seems Words Are Now Weapons In Some Criminal Courts