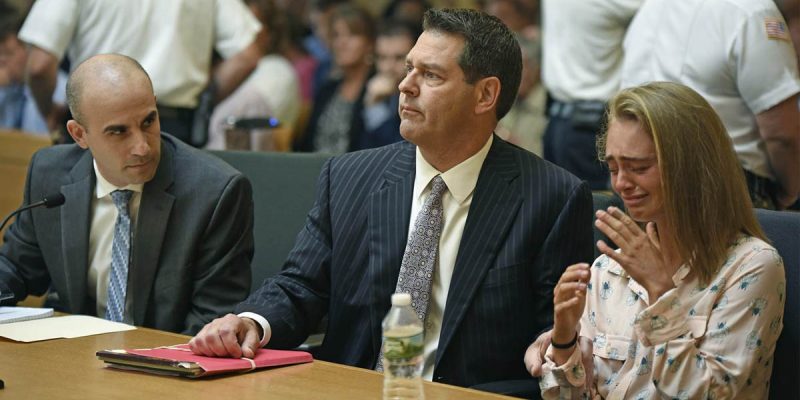 On Friday, a 20-year-old woman was convicted of manslaughter in Taunton, Mass., because three years ago she sent hateful messages to her ex-boyfriend encouraging him to commit suicide.

According to news accounts of the trial, the woman, now 20, sent “a barrage” of text messages to her then 17-year-old boyfriend urging if not commanding him to take his own life.  Seated in his truck, suffocating with carbon monoxide of his own choice, the young man exited the truck and texted her that he was scared.  Her reply: “Get back in the truck.” And he did, choosing to stay there until he was dead.

It is an unspeakable tragedy and the young lady’s conduct is unspeakably inhuman.  It is hard to justify, however, that her awfulness was criminal, beyond possible charges of negligence for failing to report what she knew was afoot.

I was not in the jury box, and I am very sensitive to issues related to suicide. I’ve lost people I know to this horror, I’ve cried with people who have lost loved ones to suicide, I’ve counseled friends who were suicidal, I served on the board of directors of a suicide prevention organization, I’ve sat on panels to discuss it, and I’ve even responded to “crime scenes” where someone had succumbed to his or her own fatal hand.  Suicide is sad, it is horrible, it is to be discouraged, prevented and avoided.  I have wrestled with depression myself – who hasn’t? – and have had suicidal thoughts at points in my life.  Had someone texted to encourage me to take my own life, it actually would’ve ticked me off so badly it would have given me a reason to live – to punch them in the face.

Not everyone thinks or feels that way, of course.  Motivations for suicide are arguably as variant as the people who commit the act.  Mental health issues and other factors – often unknown – play into a person’s decision to take his or her own life.  Lack of mental health resources and an unwillingness of those in need to reach for the resources that are available – due to stigma, family pressure, what have you – contribute.  Substance abuse and addiction can play a role.  Traumatic events such as the death of a loved one, a relationship ending, financial hardships and the like, can all be relevant.

It seems apparent that in some cases – hopefully rare – one person’s incomprehensible coldness, soullessness or callousness can also push someone over the edge.  When those cases happen, it is especially sad, not only for the one who is lost and his or her family but for what it reflects about the instigator.

Being a heartless SOB is not, however, criminal.  Words are not weapons.  Saying hateful, hurtful or emotionally harmful things does not make someone responsible for the actions of another.

In the days since Congressman Steve Scalise was shot and others wounded on a ball field in northern Virginia, the venom has been similar.  Extremist, heartless leftists have blamed the shooting on extremist, heartless rightists – all purveyors of rhetoric and blather that do not reflect the true intentions of either mainstream party.  Some have reached into recent history and blamed the shooting of Congresswoman Gabby Giffords in 2011 on Sarah Palin and others.  They’ve blamed Scalise’s shooting on his own votes and positions about an expansion of gun control.

The shooting on Congressman Scalise happened for one reason:  A lone gunman whose name isn’t worth mentioning committed an unspeakable act.  The shooting of Congresswoman Giffords happened for the same reason.

The death of that young man in Massachusetts three years ago happened because he, too, made a sad and awful choice.  To blame it on words sent via a text message is an affront to personal responsibility, free speech, and simple reason.

Consider this a message from me to all who read this:  Do not get back in the truck.  Do not harm yourself.  Reach out for help.  Pick up the phone, not the gun.

I will now take credit for every one of you who lives through the day.  Written words, apparently, are just that powerful.

Interested in more national news? We've got you covered! See More National News
Previous Article CROUERE: This Week Proved Wayne LaPierre Was Right
Next Article FAGAN: When You Got Fight In You