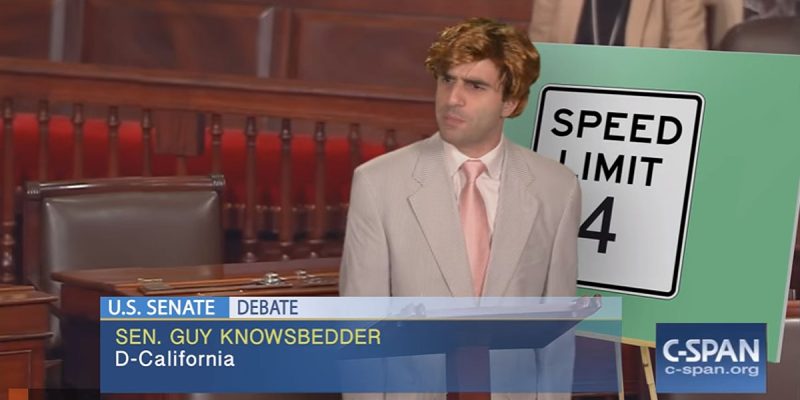 As our readers know, we’re huge fans of Remy, the uber-talented musical parodist at Reason.tv who regularly skewers politicians and media types for the stupid things they commonly say. His latest effort is well worth a watch…

What’s best about this is that it points out something everybody in the country ought to be very sick and tired of, in which Elizabeth Warren is the single worst current offender – namely, the constant conflation of policy with physical violence. Warren is ceaseless in her bleating about changes to federal health care law amounting to the murder of the old, sick and poor; it’s a tactic she uses in describing more or less everything else she disagrees with. That it works on some segment of the American public is a damn shame; one hopes that it’s a tactic which is becoming as tired and ineffective as the Democrat Party as a whole, but that doesn’t happen without a healthy dose of ridicule applied to it.

Which Remy is good for.

We also like Remy’s point about the use of incendiary and cataclysmic rhetoric in order to push the nanny state on the population, something which is overdue for ridicule. Democrats long ago realized you can get people to agree to exceptionally intrusive and stupid policies if you can sell them as a response to a crisis, and the rest of us have yet to come up with a reliable antidote to that. Maybe we ought to let Remy just ridicule them for it.

Of course, the other piece to this is the dishonesty. Liz Warren might run around the country accusing her political opponents of being murderers, but by her standard she might as well by Joseph Mengele. After all, the single-payer health care system she touts is horrific in practice…

Brian Jarman is the Marmite professor of health statistics. You either love him or hate him and his controversial but influential index: the hospital standardised mortality ratio (HSMR).

In a Channel 4 report on Wednesday he said he had collected information from countries around the world. From that he found in 2004 that the NHS had the worst death rate figures of seven countries including Canada, Holland, Japan and the US. Once the death rate was adjusted to take into account the different health systems, England’s level was 22% higher than the average of all seven countries and 58% higher than the best country.

When Jarman projected the figures forward to 2012, the hospital death rates in all seven countries had improved – England’s faster than some. However, it is still among the worst on this issue and, by his methodology, has death rates 45% higher than the best performing country, the US. The US has lower life expectancy – two years less than that in the UK – and millions of uninsured people who struggle to find healthcare, so the finding was combustible.

By the standards of argumentation Liz Warren employs, someone can, and perhaps should, accuse her of trying to murder some 45 percent more people in hospitals than currently die there. Children, old people, the poor – no one will escape her insatiable appetite for carnage.

Oh, and Medicaid? Specifically the Medicaid expansion Warren rails against rescinding? She’d leave a bloody trail of death and destruction as well. We bring you Illinois…

The Illinois General Assembly opted to expand Medicaid through Obamacare in May 2013. This expansion created a new Medicaid category for able-bodied adults ages 19-64 with incomes below 138 percent of the federal poverty level.

But the Medicaid program was designed to serve the truly vulnerable – the aged, the blind and the disabled – and expansion critics have long warned that creating a new welfare class would prioritize able-bodied adults and put more vulnerable people at risk by redirecting limited resources. Now, newly obtained data from the Illinois Department of Human Services, or DHS, confirm these fears.

According to documents provided by the department, 752 Illinoisans on the state’s Medicaid waiting list have died awaiting needed care since the General Assembly voted to accept the Obamacare expansion for able-bodied adults. That’s 18 deaths each month, on average, since the expansion was authorized.

Liz Warren voted to expand Medicaid, and she argued in favor of it. She owns the Medicaid expansion. And by her rhetorical standards she killed those 752 people.

See how this works? Maybe it’s time to take Remy’s advice, drop the overheated rhetoric and start acting like adults for a while. If that’s within the intellectual and emotional capabilities of people like Liz Warren, that is.