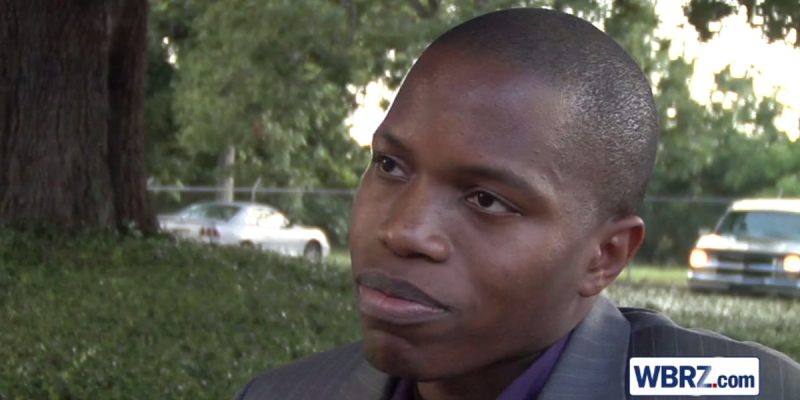 Remember Montrell McCaleb, the former janitor-turned-nonprofit-hustler who found his way onto the board of the Capitol Area Transit System, only to lose his spot when it was discovered he had taxpayer cash paying his DirecTV bill?

We had a lot of fun with McCaleb at the time, given that he was a perfect avatar for the corruption and greed infesting so much of Baton Rouge’s public sector hangers-on. McCaleb was Tasha Clark Amar before Tasha Clark Amar was cool, one might say.

McCaleb essentially traded his vote on the CATS board for freebies out of the bus system’s treasury, to the tune of some $1400. Most people would call that stupidity, and it’s fair to say when he got caught the cost to him was considerably greater than what he derived from his chiseling.

But as WBRZ-TV’s Chris Nakamoto found in a report airing yesterday, McCaleb hasn’t found the path of the straight and narrow just yet – he’s still in the non-profit game, working his way back to the public sector taxpayer hosepipe.

At the time McCaleb’s CATS sins found him out, he was listed as a director of something called “Motivating Students For Academic And Career Success,” which the Secretary of State’s office listed as having been founded in 2012.

The Secretary of State pulled that non-profit’s charter on November 20, 2015.

But that didn’t stop the McCaleb empire. He just decided he’d go around with an alias, is all – seeing as though the Montrell McCaleb brand had a little mud on it.

As Montrell Henderson, he’s more prolific. Here’s what a search under that name turns up at the Secretary of State’s website…

It’s almost like he found a name generator somewhere on the internet to cook up these non-profits. Some of them are old; the MJ Henderson Youth Leadership Institute was founded in 2005 and killed by the Secretary of State in 2009, and the Henderson Youth Association For A Better Tomorrow, Incorporated is even older than that; it was started in 2003 and had its charter revoked in 2007.

But the Community Association of Underprivileged Students – which has to be one of the most entertaining names in the history of Unsellable Non-Profit Scams; it’s like something out of Oliver Twist – is new. It was set up in 2014 and it’s still active, although Montrell forgot to file his annual report last year.

And he’s not just going by Montrell Henderson, as Nakamoto reported.

As MJ Henderson he’s got the Louisiana Educational Experience – we’re assuming that’s the registered name of the Louisiana Cultural Arts And Academic Experience which Nakamoto knocked over in last night’s report as a scam; that one was started in March of last year. He’s also got Our Youth Our Future Christian Outreach, which is his new venture; that one was filed for on Jan. 3 of this year. McCaleb is calling himself M-Jovan Henderson in the paperwork for that one.

As an aside, on the paperwork with the Secretary of State for both Motivating Students For Academic And Career Success and Our Youth Our Future Chrstian Outreach is a lady named Cheryl Dunn, whose LinkedIn profile says is a Special Assistant to the President of the Southern University system. This, despite his being outed as a crook and pleading guilty to theft.

None of this is especially big-time stuff, and as you can see from Nakamoto’s report it isn’t like Montrell is raking in lots of money he can buy a decent house with. But what’s pretty clear from tracing the history of his operation is that when you lay out taxpayer dollars for quasi-public services like CATS, or more recently the East Baton Rouge Council On Aging, you will attract lots of grifters and scam artists like Montrell McCaleb.

He had to work extra hard for that $600 he ripped off from that restaurant, and he ended up on TV as a result. But at some point, left unchecked this guy will find a way to attach himself to a taxpayer-funded hosepipe and then the living will be easy.

With the citizens of Baton Rouge apparently gullible enough to continue voting for dubious taxes to support bloated, unaccountable and ineffective organizations like CATS and EBRCOA, it’s inevitable we’ll be providing that hosepipe to Montrell McCaleb – or others just like him.