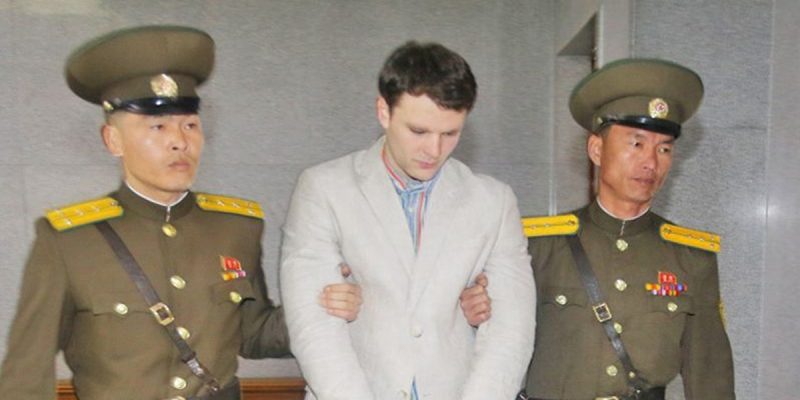 North Korea isn’t a place that ranks high on many American tourists’ radar for obvious reasons.

And that is perhaps the allure of the “Hermit Kingdom” for some US travelers as it’s a place fewer than 1,000 Americans visit annually.

From a sociological standpoint, I can see how the DPRK could be interesting: it is George Orwell’s 1984 come to life as North Korea is the world’s most “perfect” totalitarian state.

Perhaps some western tourists relish the role of playing Dante Alighieri touring the Inferno that is North Korea; guided through hell by a state sanctioned tourism group acting as their Virgil.

Unlike Dante in the Divine Comedy, a college student from Ohio didn’t make it out and instead languished through a physical and psychological torture that not a soul in America could comprehend.

Otto Warmbier was traveling in China when he was lured by a travel agent to take a New Year’s holiday trip to North Korea.

While staying at the Yanggakdo International Hotel, a massive western style luxury hotel for tourists, Warmbier allegedly entered a restricted floor that was not accessible via the main elevator and stole a North Korean propaganda poster.

An American tourist who had stayed in that same facility while one a similar tour verified that a tourist could not accidentally wander into that area. You had to make an effort to get there.

North Korean officials released less than clear video footage showing a silhouette resembling that of Warmbier removing the poster. And during the disgusting show trial Warmbier made a coached confession using stilted terminology to be utilized by North Korea for propaganda.

A witness to Warmbier’s arrest claimed the 21-year old smirked upon being taken away by police. Perhaps it was a subtle admission of guilt and the false belief that the material would be confiscated and as an American he would be put back on the plane.

Even if Warmbier actually sneaked on to the restricted floor and/or stole the poster, his show trial, conviction and sentencing, and treatment that led to his death further underscores the barbarity of the North Korean regime.

Though this should not come as any surprise.

Since Kim Jong Un succeeded his father as supreme leader of North Korea and became the first millennial with nuclear weapons, reports about his sadistic elimination of rivals have leaked to the west, including executions via flamethrower, antiaircraft cannon, mortar round, and the well-circulated story of how his uncle and comrades were fed to ravenous dogs.

Though a North Korean official denied the latter method was used to kill Un’s relative, he did affirm that the uncle was indeed executed for allegedly deviating from the party line.

Perhaps he did not cry convincingly enough at Kim Jong Il’s funeral.

Many totalitarian governments, particularly Communist regimes, tend to be hyper-legalistic to justify the excessive sentences and punishments they hand out. They look for their first opportunity to exploit errors, even minor transgression to both send a message to the masses and to score bribe money.

Russian police are known for stopping tourists for their passports and upon handing their documents over, demanding money to return them lest they be arrested for traveling without proper credentials.

Being an American tourist doesn’t necessarily mean you carry with you any sort of special protection; in many ways you’re that much more of a target because you’re assumed to have money and coveted possessions.

And in certain countries that are best avoided, you might have political value.

While traveling in eastern Europe I’ve been singled out for “transit ticket verification” while I’ve seen American college students crying their eyes out before authorities for neglecting to buy that subway or train ticket.

When you hail from a superpower and wealthy country, you’re not going to engender much sympathy from low-wage earning minor officials who are envious of your lifestyle.

For Americans going overseas or Latin America, it’s best to avoid bringing too much attention to yourself, follow the rules, and pay the tariffs.

The United States should exact vengeance on Pyongyang while protecting our citizens by blocking future travel to North Korea. I have never understood why it was criminal to vacation in Cuba yet legal to spend money in a country feverishly working to develop a nuclear program that can strike North America.

Furthermore it’s apparent that the travel agencies are obviously unable to effectively mediate between their clients and the North Korean government. And as tensions escalate between Washington and Pyongyang there is the prospect of tourists being grabbed as hostages, being used as either bargaining chips in negotiations or human shields.

While denying the trickle of American tourism dollars to North Korea might not in itself have any significant effect on their economy, the US government must demonstrate to other countries that there will be consequences for foreign governments who harass, unjustly imprison, torture, or kill our citizens.

Whether Warmbier was a victim of North Korean judicial and penal overkill or was poached for geopolitical gamesmanship is not relevant, his murder by the North Korean state is.

Otto Warmbier was not an intelligence officer spying on North Korea but merely a college student who wanted to explore an odd corner of the globe. There’s nothing that young man did to deserve what he was subjected to and his death has shined an even brighter light on the sadistic nature of that rogue state.