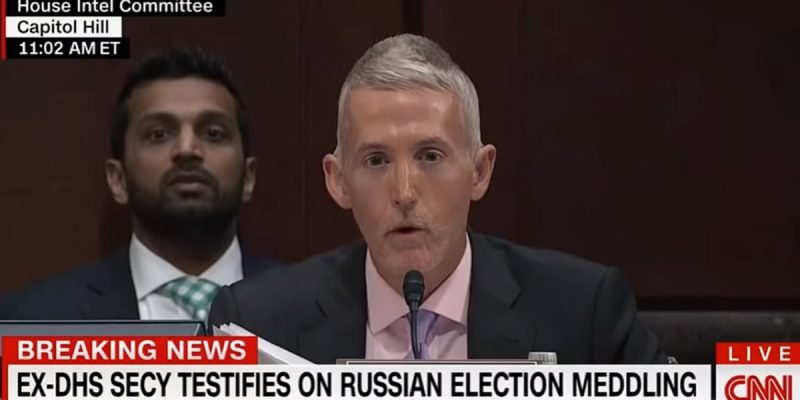 Here’s a video clip from yesterday’s hearing at the House Intelligence Committee, in which South Carolina Republican congressman Trey Gowdy, who is also now chairing the House Oversight Committee which is looking into multiple aspects of the Trump-Russia controversy, asks former Homeland Security director Jeh Johnson a question the latter simply doesn’t want to answer.

Namely, why is it that the Democrat National Committee never turned its e-mail server – the one which we’ve been told over and over again was hacked by the Russians – to law enforcement agencies investigating the hack?

Johnson has no answer for the question and basically throws up his hands.

This isn’t a particular shot at Jeh Johnson, whose tenure at DHS wasn’t overly successful but by Obama administration standards ranks in the “could have been worse” category. But what the question-and-answer with Gowdy illuminates is the flimsy nature of the media narrative built around the entire Russian-meddling-with-the-election theory.

No one disputes that the Russians meddled with the 2016 election. The Russians have been meddling with American elections since Vladimir Lenin got off the train in St. Petersburg in 1917, and sometimes that meddling has been a lot more successful than we might like to recognize. Was the 2016 edition of that meddling significant to the outcome?

The Democrats would like to say so, and they would further like to say that it was successful because the Trump campaign was in bed with the Russians. The hack of the DNC’s e-mails, from which came a host of disclosures at Wikileaks embarrassing and unpleasant to the DNC tumbled forth, would obviously be part of the evidence behind that theory.

But after months and months of discussions about collusion and The Russians, there doesn’t appear to be a whole lot of solid evidence of a couple of crucial elements to that story. First, that it was in fact the Russians or agents thereof who hacked the DNC servers – and Jeh Johnson confirmed, by his failure to answer Gowdy’s question, that we can’t know who did the hacking until the government can examine the server for incriminating evidence as to the culprit, and furthermore the DNC wouldn’t and won’t cooperate in that examination.

There was a private company the DNC hired to look at its server and the federal government accepted that private company’s findings. So far as we know the feds didn’t even confirm those findings with a second opinion, much less look at the server themselves. Therefore we are largely taking it on faith that it was the Russians who hacked the DNC server – which is certainly possible and maybe even likely, but hardly proven. Other theories, such as the one being bandied about in conservative circles that it was murdered DNC staffer Seth Rich who turned over the contents of the e-mail server to Wikileaks, or another which we find more plausible that it could have been the Awan brothers, the Pakistani IT professionals hired by then-DNC chair to do work for the Democrat congressional caucus and who may or may not have also done work for the DNC before going under investigation for potentially selling that information to third parties, can’t be dismissed.

At least not until someone in a position of authority can look at that server and determine with some degree of certainty who it was doing the hacking. Which Jeh Johnson admits the feds did not make happen.

The second piece which has not been proven is the relationship between the Trump campaign and the Russians and that this relationship consisted of the two entities working together. Gowdy and Johnson had a conversation about that, too…

It would be in Jeh Johnson’s interest to offer some support to the collusion theory, seeing as though he’s a prominent Democrat in politics and to do so would make him a hero in that party’s political circles. And yet he categorically didn’t do anything of the sort.

If you’re beginning to see all this as a significant waste of time, a snipe hunt which will never amount to anything of value other than to spread political damage to a presidential administration, you’re not alone. If the Democrats were serious about proving Russian meddling in the 2016 election to benefit Trump with Trump’s assistance, they’d turn that server over. But clearly they don’t want to do that – and one reason why that might be so is it would be worse for them if the feds saw everything that was on the DNC server.