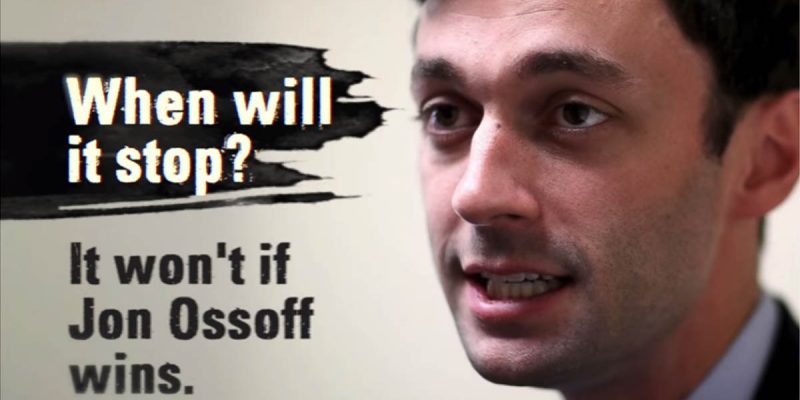 The guess here is we’re likely to have a pretty serious argument about whether the Principled Leadership Project PAC’s ad, released last week as the Karen Handel-Jon Ossoff congressional race in Georgia comes down to what could be a photo finish, will end up sinking Handel or Ossoff. The Principled Leadership Project PAC is a small outfit our buddy Rick Shaftan is affiliated with; this is Rick’s ad and it’s of a piece with a number of other examples of hard-core messaging designed to motivate conservative voters to turn out at the polls.

The spot is entitled “Stop The Violent Left,” and it goes there on the attempted Steve Scalise assassination.

For this writer, counting Scalise as a personal friend, the ad cuts a bit too close to home. It’s a bit too soon for this strong a message. But the guess is there aren’t too many people who are personally affected by the attack on Scalise last week in that suburban Atlanta congressional district and so the attempted assassination is more of a political atrocity than a personal one like it would be in suburban New Orleans.

And there is merit in the message, in that if conservative politicians, pundits and voters have spent the past six months saying “This is why you lost” as a response to whiny and stupid statements being made by Hillary Clinton supporters in the aftermath of her defeat at Donald Trump’s hands then certainly in the aftermath of James Hodgkinson’s foul deeds there should be no question of Ossoff’s defeat, right? After all, there is scant difference between Ossoff’s politics and those of Hodgkinson outside of the latter’s willingness to act on his sentiments in a kinetic fashion. Do voters in that district wish to reward kinetic leftism and the people who post gleeful things about Scalise having been shot?

Let’s also not forget that last week Handel, whose camp denounced the ad but didn’t ask for it to be taken off the air, was the recipient of a mail package containing a threatening letter and a mysterious white powder which turned out not to be dangerous, and her campaign cited security concerns as a justification for keeping the location of her victory party Tuesday night secret until the last minute. The race in Georgia’s 6th District was already a bare-knuckle brawl replete with dirty tricks on the Democrat side.

Some years ago, an ad like this would be considered crass and unhelpful. We might all like to return to that time. But in an era of Kathy Griffin posing with a facsimile of Trump’s severed head, Hodgkinson and Antifa, it’s a valid question whether the conservative side’s answer is (1) to uphold civility in the face of the Left’s anarchy, or (2) to give as good as it gets by calling out the Left’s political candidates to answer for the sins of its activists?

You’ve probably heard the arguments on both sides. Which way do you go on this spot?

Interested in more national news? We've got you covered! See More National News
Previous Article FAGAN: When You Got Fight In You
Next Article Does Louisiana Deserve Steve Scalise?