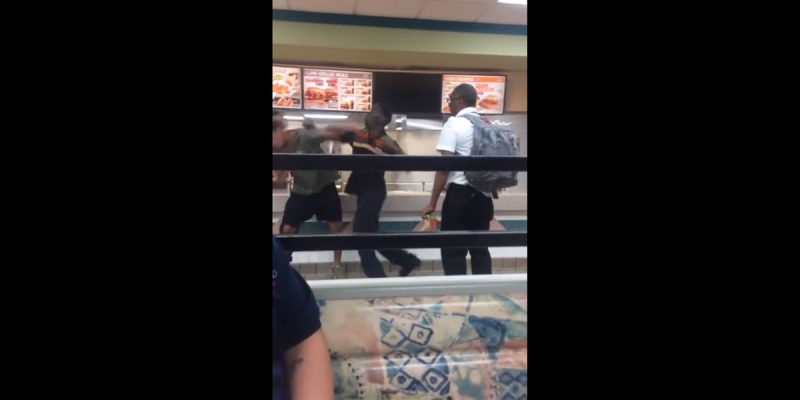 We don’t have any choice but to post this, since the Burger King Taser Brawl video has done gone viral all over the internets and we can’t miss out on all the traffic. Besides, I’m the one who posts all the Too Stupid For Prime Time material around here and I’ve been fallin’ down on that job.

If you’re at work, what’s a good suggestion is to turn down the volume before playin’ this, because it’s hard to make out any words which aren’t cuss words. Besides, you don’t really need the audio for this one.

What happens here is some homeless-lookin’ white dude comes into this Burger King somewhere in Houston, and whether he’s on a bad trip or he’s just got some evil spirits in him some kinda way he sets forth to disrespectin’ the employees. As in, he throws things around, breaks a cash register and generally causes a commotion. All while he hobbles around on a soft cast that basically gives him a peg leg.

So eventually, one of the employees confronts him and attempts to convince him he’s actin’ poorly. That earns the employee a shove, and then it’s on. Guy drops Homeless-Lookin’ White Dude with a couple of shots – it’s hard to keep your balance when your leg’s in a cast, dontchaknow – and once he’s down…let’s just say he’s at a disadvantage.

Some other cat who looks like he might be the store manager comes over and stands on his head – like literally, he’s got one foot on the dude’s head and another on his chest, but the store manager leaves off because the nice lady from behind the register convinces him to get out of the way so she can use her taser on him.

Which she does. Twice. It doesn’t appear to have a major effect on him, but it’s clear the more interestin’ part of the fight is through.

And then they give him the bum’s rush and tell him Stay Out Of The Woolsworth. Supposedly he then escapes on a city bus. One would suppose he behaves a little better on a public conveyance than in that quick-serve restaurant, but on the other hand anybody who’s been on a bus at night knows this cat and his antics wouldn’t be out of place in the least.

Like the headline says. Dinner and a show at the Burger King, y’all.

Interested in more national news? We've got you covered! See More National News
Previous Article CROUERE: Reality – And A Long Prison Sentence – Bites Ms. Winner
Next Article BATISTE: Mitch Landrieu Is Afraid To Be In Parts Of New Orleans Due To Crime