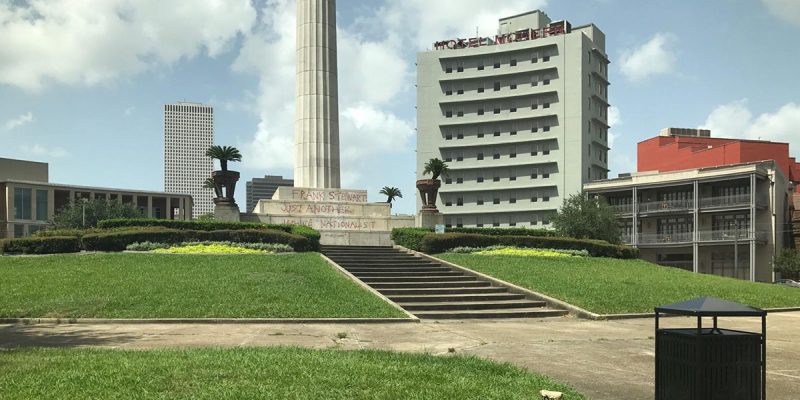 A recently outspoken retired New Orleans businessman had his name and reputation vandalized at the base of the Lee Circle Monument today.  On Friday some unknown vandals spraypainted in big letters “FRANK STEWART: JUST ANOTHER WHITE NATIONALIST” on the pyramid steps of the 1884 monument to Robert E. Lee. 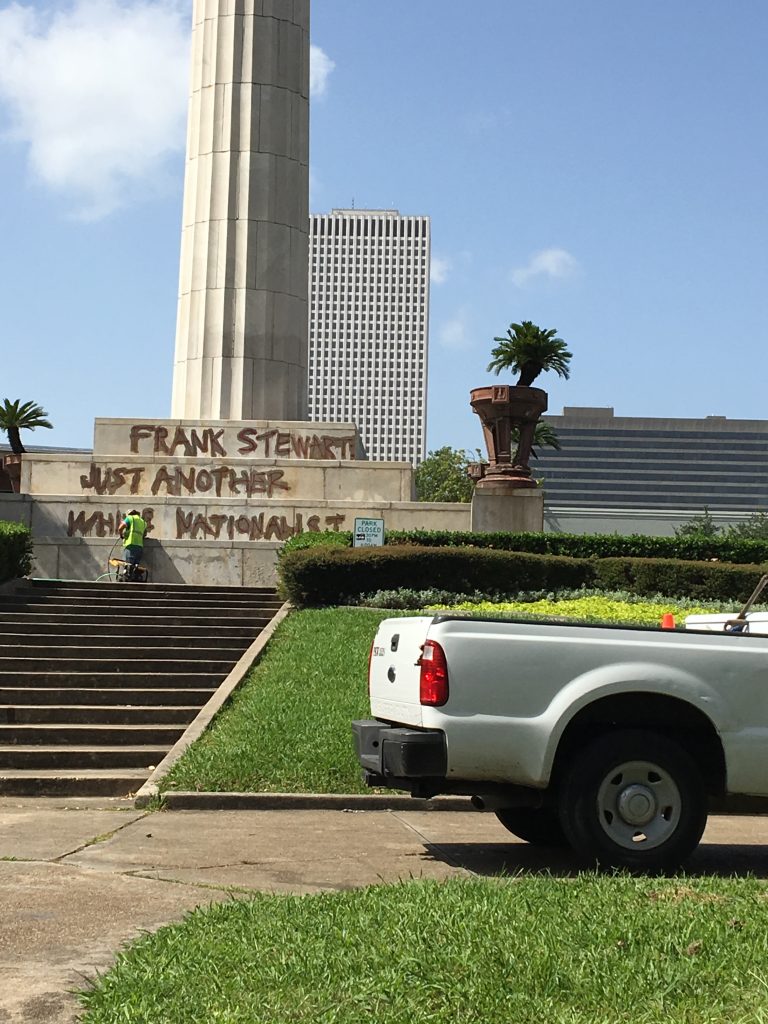 In late 2016, a group of Antifa (Anti-Fascists) spray painted the same monument with words such as “Die Whites Die” and “Kill White People.”  The city rushed to clean it up.  The New Orleans media covered the cry-baby protest, however cameras did not show the hate vandalism.

Mitch removed four historic monuments and vandalism has gone hand in hand with Mitch Landrieu’s anti-monument crusade.  Since June of 2015, Landrieu has no arrests to show for monument vandals, except the one instance where it was a pro-monument pair who spray painted “Gen. Beauregard” on the base of the Beauregard monument after Mitch removed it at night.

The reason for the attack on a New Orleans businessman is simple.  In late April, Mitch gave an interview in which he sounded like a lunatic.  He called out Frank Stewart by name as being pro monument, as if it was a crime.  Stewart is a long time friend of the Landrieu family and past supporter of all Landrieus.  He has spent what must be in the tens of thousands running full page ads in the Times Picayune, the Advocate, and Gambit Weekly calling out Mitch for destroying history.  Most recently, Stewart published an ad announcing a petition to put the monuments back up.

The vandals are using an old liberal tactic of intimidation.  They want to silence Stewart by labeling him an evil racist.  By race-bullying, they hope Stewart will back down from his drive to get the Beauregard, Davis, and Lee monuments put back in their historic places.

“The Marxist led TEDN/Antifa NOLA are always good little Communists resorting to yelling ‘racist’ in an attempt to silence those who speak with the voice of reason against their disruptive ideology. Comrade Trotsky would be very proud of them,” said George Peterson, monument supporter, talk show host, and opponent of leftist aggression.

The vandals likely don’t know who they’re attacking.  Stewart has character and a career of success.  He’s standing up for a principle and the anti-monument crowd Mitch has embraced are going after anyone with an opposing opinion by applying damaging labels.  Mitch uses the same strategy by mentioning white supremacy in every comment about the monuments.  Every single comment.  And the local media also runs with the race-bullying.  Mitch and the media are complicit in this.

Interestingly, crews were out cleaning this hate vandalism the day it happened, just as they had done with the racial threats on Lee’s base after the 2016 election.  This was not cleaned by the Monumental Task Committee who typically cleans and maintains the city’s monuments at no charge.  This was a Mitch decision.  He knows about it.  He wants it covered up. Mitch doesn’t want to see a story about his anti-monument comrades attacking a reputable, powerful, vocal man like Frank Stewart. This vandalism would also bring more attention to the petition to re-erect the monuments and Mitch doesn’t want to have to address that either.