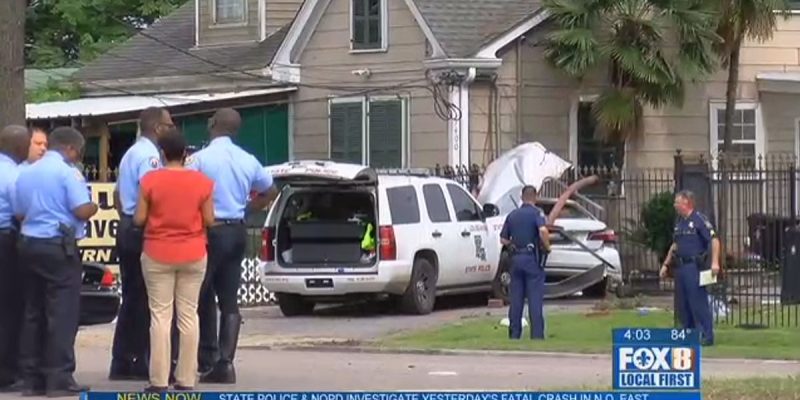 The young girl’s great grandmother criticized the police for pursuing a car with stolen license plates on a chase that went the considerable distance from downtown New Orleans on to Interstate 10, over the high rise, and concluding with a vehicular crash in New Orleans East that led to the deaths of the baby girl and another passenger when they were ejected from the vehicle.

The driver was going 90 mph at one point and after the crash, killed himself with a gun he had on his person.

It’s never the fault of the armed driver with the stolen license plate who endangered the lives of the unrestrained child and passenger by recklessly speeding across Orleans Parish, to say nothing of the people in other vehicles who could have been injured or killed had Kenneth Davis’s Honda Accord slammed into a school bus or a family in an SUV instead of a fence on Chef Menteur Highway after exiting the interstate.

These are the times we live in, where the relatives of a thug who got killed by the police, passerby, or even the victim herald the virtues of their “good son” who didn’t mean to hurt anyone while waving a handgun at people.

Perhaps this revisionism of character is based out of embarrassment, as the mother, father, or grandparent doesn’t want the world to think they failed to raise their kid properly.

Or maybe they’re looking to set up a narrative, with the giddy assistance of the leftist SJW media, to vilify police so they are pressured to cutting a hefty check.

Consider what happened in Ferguson, Missouri where the family of Michael Brown received an enormous settlement from a “wrongful death” claim.  The officer who fatally shot Brown, Darren Wilson, maintained that Brown had charged him and was attempting to grab the policeman’s gun.

Had Brown succeeded in getting ahold of the pistol and killed Wilson, there would have been no outcry or riots.  And not nearly as much cash and prizes forwarded on to Wilson’s next of kin.

Wilson was cleared of any charges, including by an Obama Justice Department that desperately wanted to find something on the cop.

Ferguson would go up in flames shortly after Brown’s unhinged stepfather Louis Head declared to a crowd to “Burn this bitch down!”.

Head’s exhortation was promptly carried through.  Ferguson suffered over $5 million in damage.  Head never got sent to jail for inciting a riot and Brown’s family received $1.5 million.

It’s worse than profiting off of tragedy.  It’s profiting off a lie and incentivizing criminals to keep doing what they’re doing.

At a minimum a thief might walk off with something he stole, but if the police mess up or if the victim “unreasonably resists” a much bigger payout potentially awaits.  You or your relatives just need to lawyer up and find a sympathetic reporter and newspaper editor.  The sweaty insurance company officer will have a check ready.

Surely there won’t be any undesired effects from this new consequence free model of “crime management”?

Three years ago Merritt Landry severely wounded a teenager who had intruded on to his property in the Faubourg Marigny.  The journalistically irresponsible Advocate (as opposed to the just plain liberal Times Picayune) moved heaven and earth to fan the flames of the story, since the shooter was white and the trespasser was black.

Landry was arrested and lost his job just for having the audacity to protect his home and family in crime-infested New Orleans.  The young man would be arrested a year later attempting to break into another home in the Marigny. The cycle repeats because the criminal is portrayed as the victim and the political class and the media go along with the fairy tale that may lead to a pot of gold for someone but no happy ending.

The consequences, both civil and criminal, for the victim protecting his home and property and for law enforcement personnel just trying to do their job are becoming as great or greater than the risks facing the perpetrator of the crime.

The “blame the police” mentality for not giving “space” to criminals is the very definition of insanity in New Orleans, a place where victims can’t defend themselves from criminals because that’s the police’s job and where the police shouldn’t pursue criminals.