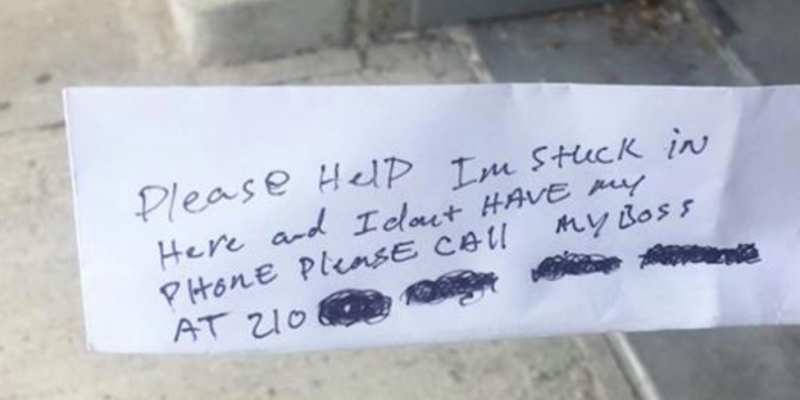 According to the Corpus Christi Police Department, a contractor decided to give “Florida man” a run for his money as he was working on changing locks at a Bank of America ATM and became stuck inside the ATM room.

In order to get out, he began slipping notes to ATM customers asking for help. He asked them to call his boss as he had left his phone in his truck.

When police arrived they heard a faint voice from within the ATM.

“We come out here, and sure enough we can hear a little voice coming from the machine. So we are thinking this is a joke. It’s got to be a joke,” Senior Officer Richard Olden told one reporter.

Reports are conflicting as to whether the officers actually called the number to the man’s boss to free him or if they had to kick in the bank door. A spokesman for the Corpus Christi Police Department was unavailable to confirm at the time of publishing.

Apparently, the police weren’t the only ones that assumed it was a joke. The man had to send several messages before someone called the police.

The man was trapped approximately two hours before he was freed. The bank building was closed for repairs. The man was likely embarrassed but was unharmed.

“Everyone is okay, but you will never see this in your life, that somebody was stuck in the ATM, it was just crazy,” said Officer Olden.

The story is so odd that it became a trending topic on Facebook thanks to odd news websites picking it up.

So next time you’re withdrawing money from an ATM, make sure to check the receipts. You may just save someone’s life.