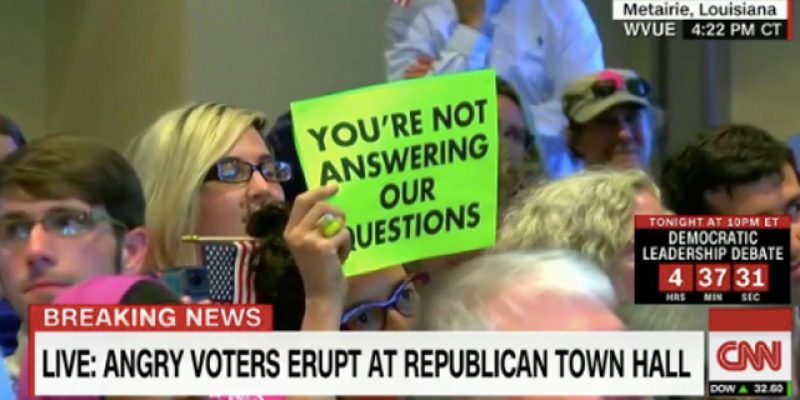 Are Republicans really that dastardly, cruel, and cold-hearted? It’s one thing for GOP leaders to help their rich friends at the expense of the poor, discriminate against minorities just for the fun of it, and conduct a full-scale war on women by refusing to pay for condoms for their boyfriends, but do they genuinely want to see 22 million of their fellow Americans die?

The Nazis killed six million Jews in the Holocaust. According to organizers of the protests, Republicans’ health care plan replacing Obamacare would be 3 and a half times worse than the Holocaust.

If the protesters are correct and the repeal and replacement of Obamacare will end the lives of so many, would it not also stand to reason former President Barack Obama saved 22-million lives by passing Obamacare in the first place?

No wonder MSNBC host Lawerence O’Donnell recently proclaimed,  “President Obama is the most noble man who has ever lived in the White House.”

Noble? Hell, he’s a freaking American hero for saving 22 million of his fellow countrymen’s lives. How insightful and intuitive of those awarding Mr. Obama the Nobel Prize before he accomplished anything. They must have somehow known he would eventually save 22 million lives. But here come the evil Republicans wanting to kill the 22 million people Obama saved.

During her live shot Wednesday morning, WAFB reporter Liz Koh described the upcoming Baton Rouge protest this way, “It’s being held under the title RIP22 Million. That number is in reference to the people in the country that could be in jeopardy if the current health care proposal passes.”

In jeopardy? Obviously Ms. Koh is a shill of the Republicans. They’re not in jeopardy. They will Die!!! Every last one of them.

“People will die if this becomes the law of the land.” Gov. Terry McAuliffe

What’s odd is that many of those losing health insurance under the Republican plan were forced to buy it because if they refused they’d pay a heavy fine. These are mostly young people who don’t believe they need health insurance because, you know, they are young and mostly healthy. Mr. Obama begged to differ.

“Most of the reductions in coverage in 2018 and 2019 would stem from repealing the penalties associated with the individual mandate,” the CBO determined with the Republican health care plan.

So what Democrats and protesters are arguing is if we don’t force millions of Americans to buy something they don’t want, they will die. They will all die!

Donald Trump tweets a video showing him wrestling someone with a CNN logo on his head and the media claims he’s inciting violence. Democrats claim Republicans want to kill 22 million people and we hear nothing but crickets.

Interested in more national news? We've got you covered! See More National News
Previous Article VIDEO: The Internet Is Busy Punishing CNN For Its Extortionary Tactics
Next Article VIDEO: The New Black Panthers Have A Mini-Riot At BRPD Headquarters