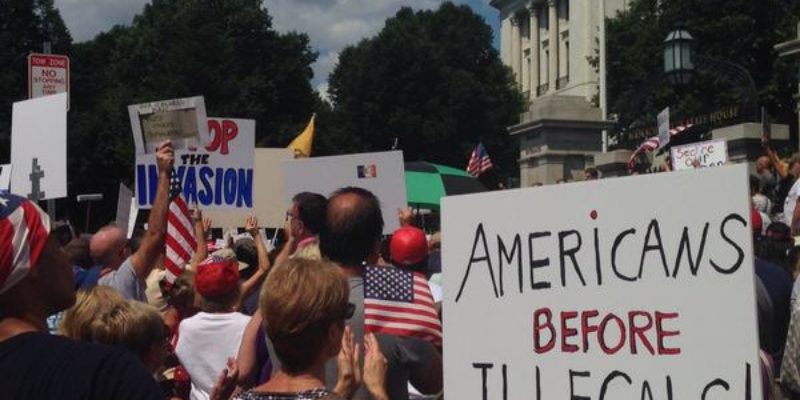 It seems the intensity of rhetoric concerning illegal aliens has never been higher in America. It has been an ongoing debate for hundred of years. Different nationalities have been ostracized, banned, or in the case of the Japanese-Americans following Pearl Harbour, placed in internment camps. Today the discussions center primarily around Hispanic immigrants from Latin America or Arab immigrants from the Middle East.

For Hispanic immigrants, this is nothing new. In 1980, when Ronald Reagan and George H.W. Bush were campaigning for the Republican party primary they had to answer questions on their stance on immigrants rights.

Back then both candidates and future Republican presidents spoke of these immigrants as deserving of basic fundamentals and human rights. Today, they’d be labeled RINOs (Republican In Name Only). Why? Because they dared to act as if illegal aliens had any rights at all.

Recently, Justin Amash, United States Congressman from Michigan, was the only Republican to vote against a bill nicknamed Kate’s Law. Kate’s Law is a bill that would increase maximum penalties for criminals who have entered the U.S. illegally more than once. After the vote, he explained his reasoning on his Facebook page.

I voted no on #HR3004, Kate's Law.This bill is narrower than other recent bills that also have been called "Kate's…

When you read through the comments surrounding these events, two themes are striking. The first, is the comments about how Amash should vote in favor of the bill and “let the Supreme Court sort it out.” These types of comments are blatantly urging an elected member of Congress to deny the Constitution and let another branch handle it. Every member of every branch of the federal government is sworn to uphold and defend the Constitution of the United States. To pass the buck just because it is popular is not just a dereliction of duty, but it is treasonous. It is an act against the government and the people. Any elected official that denies the Constitution should not only be voted out, they should be arrested.

The second stream of comments attempts to argue that illegal aliens have “no rights” under the Constitution. This type of thought process shows how far we have come from understanding what rights are and from where they are derived.

The left has over shot the mark and wants to claim any myriad of things a “right” from health care to free college and even free abortions. What they refuse to see is that nothing can be a right if it requires the work or efforts of another human being. The right to life, the right to gather, the right to speech, the right to bear arms does not require the action of another. It may require the inaction of others, but it cannot require action.

Conservatives, on the other hand, have forgotten that these rights are not derived from the Constitution. They are merely enumerated there in. Our rights as declared in the Declaration of Independence stem from “The Laws of Nature and Nature’s God.”

Our rights are natural. They don’t come from a document. They come from God. Government does not grant people rights, it is merely tasked with protecting our rights.

To say someone has “no rights” is to say they are not human. Even if they are accused criminals, they have the right to dispute those charges, as Amash defended.

As a friend of mine likes to say, God and government may both start with “g-o” but they are not the same thing. Do not get them confused.

Interested in more national news? We've got you covered! See More National News
Previous Article Mitch Landrieu Turns His Attention To The Pressing Issue Of Climate Change
Next Article Trump’s Economy Is Beginning To Perform So Well That The Unemployment Rate Is Rising