We’re just asking the question, because it sort of seems like he might have been a snitch.

We don’t know what a “street counselor” is, or why it’s worth spending our tax dollars to pay one.

Reacting to the comment in a prepared statement today, Mayor Sharon Weston Broome delivered a bombshell of her own: Reed had been engaged by one of her administrators to work in the BRAVE crime prevention program.

In the statement, in which the mayor calls Reed’s remarks “hateful, offensive and frankly unacceptable,” Broome says she only recently learned Reed was “engaged by a member of my staff to serve in a contractual relationship as a ‘street counselor’ for the BRAVE program.”

She does not say when she was made aware of the relationship or who the staffer was, but says, “That contract was cancelled and no monies were dispersed.” (sic)

The statement does not elaborate and her office did not respond to questions seeking additional information in time for publication.

Sources familiar with the situation, however, say the mayor became aware of the contract earlier this week, after a public records request was filed by a local television station that had gotten wind of the deal.

Besides the entertainment and perhaps Freudian slip character of mistaking the characterization of monies being dispensed as being dispersed (the effect of paying Silky Slim to do any productive work would no doubt be identical to dropping cash out of helicopters over the city), this isn’t the kind of thing one would have expected. If no monies were “dispersed,” one explanation would be he was hired as a snitch – maybe they called it something else – and he turned out not to have any information worth paying for.

What you would expect, though, after the mayor issued that statement offering up the company line, is that Reed would either give a “no comment” or echo that line. Nope – that’s not what he does…

Reached by phone, Reed contradicted the mayor’s statement and said he never had a contract with BRAVE. But he concedes his organization, Stop the Killing, was negotiating with the city-parish for a contract that would have been worth $5,000.

“It was such a small amount there didn’t even need to be a contract” he says. “It should have been a donation.”

Reed went on to say he was not aware of the particulars of the contract talks, adding a staffer with his organization, John Mitchell, had been negotiating the deal.

Reed, who served on Broome’s advisory board on police and community relations, says the mayor called him around 8 a.m. to let him know she no longer needed him on the board and that she would be issuing the written statement.

“She told me that she thought it would be in her best interest to distance herself from our relationship and that I would no longer be on the police advisory reform board and she said she had to make a public statement,” Reed says. “I said, ‘I don’t have a problem with it. I’m cool with that.’”

Now he wants donations of your tax dollars, if you can believe it. And he says he had his people negotiating the details.

Meanwhile, Broome was interviewed by WAFB-TV this afternoon about the Reed affair, and gave a number of unresponsive answers. But the news which came out of that interview was that the police union has called for her resignation – something we haven’t seen reported anywhere else.

But if Reed is correct, because he said he was under the impression the police advisory board was still extant, then Broome has lied to the people of Baton Rouge – she said it was defunct, and has been since February. Because that board didn’t just contain Reed. Gary Chambers is on that board, and so are some others whose presence within the public dialogue in Baton Rouge is less than optimal… 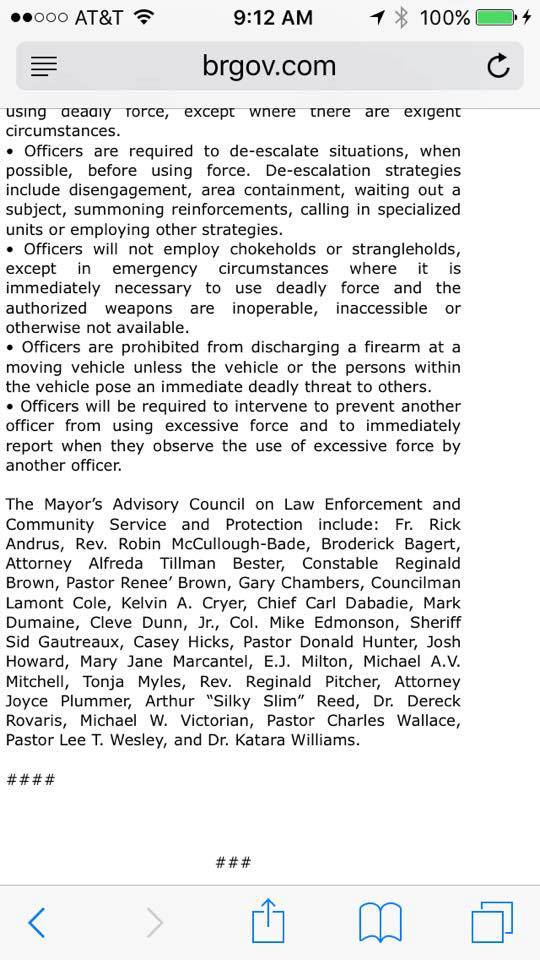 But someone is going to have to explain what a “street counselor” is and why Baton Rouge was contemplating hiring Silky Slim as one. That’s a job description which sounds like it confers virtually zero value, and thus would likely be more like a cover for doing something else. Like being a snitch for the police, for example.