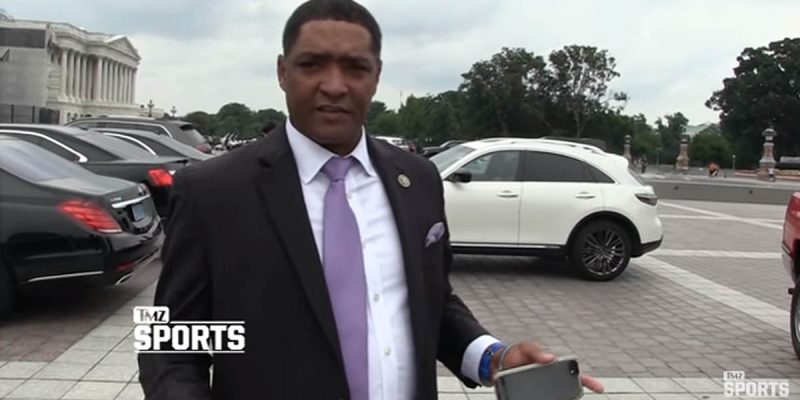 TMZ Sports caught up to Rep. Cedric Richmond, the chair of the Congressional Black Caucus, and asked him the weightiest of questions…

They could have asked him if he was concerned about the FBI investigation of the Awan brothers, who, along with some 80 of his Democrat colleagues, he’s used as IT consultants until the heat came down on them, but no. They asked Richmond if it’s fair that Colin Kaepernick, who led the San Francisco 49ers to one of the worst seasons in franchise history, was let go by the team and is currently unsigned.

Richmond’s answer belied a classic left-wing misunderstanding of what the freedom of speech is. He says Kaepernick shouldn’t be penalized for speaking his mind.

Really? Tell that to Paula Deen, or Brendan Eich, or Jimmy The Greek. Tell it to Mel Gibson. They all lost jobs because of things they said which Cedric Richmond wouldn’t have liked. Did Richmond have a problem with any of them being cut loose? Of course not.

Colin Kaepernick isn’t out of a job because he spoke out as a snowflake social justice warrior. He’s out of a job because he’s allowed himself to become a terrible NFL quarterback after showing much promise early in his career, because he’s demonstrated zero desire to refocus on his craft rather than to spout leftist politics all day, and because he used the NFL and the 49ers as a platform for political activism rather than a stage to demonstrate his athletic talents.

And there are consequences to doing so. The NFL’s television ratings took a bath last year, costing TV networks who carried NFL games billions of dollars. Those losses will be recouped when those networks bid to renew those contracts; they’ll price the losses into the bids, and that’s when the NFL will pay its price for Kaepernick’s refusal to stand for the national anthem. A JD Power survey of 9,200 football fans found that 26 percent of those watching less blamed Kaepernick and the national anthem protests for their loss of interest as the primary reason; you can’t hide the fact that he’s bad for business.

Which doesn’t stop the left-wing talkers at ESPN from echoing the whining Richmond does on the video. Max Kellerman said it was “injecting politics” for the NFL even to play the national anthem before games, while Jamele Hill, the Melissa Harris Perry of that network, went on a Twitter rampage over the fact the Baltimore Ravens took a chance on a nobody name David Olson as a camp arm over Kaepernick. They’re doing everything they can to fuel a controversy that does not exist – the people whose opinions on Colin Kaepernick matter are owners and front-office folks, and they’re as unanimous about his toxicity as they are about Johnny Manziel and Jamarcus Russell.

Colin Kaepernick has the right to trash America if he wants. He doesn’t have the right to a friendly audience for his bloviations. The freedom of speech we enshrined in the Constitution means Congress lacks the power to silence him; he has no such protection from the fans who won’t watch him or the NFL owners who want nothing to do with him. That’s the problem with playing a team sport rather than something like tennis or golf; some guy owns the team and if he hates you, he doesn’t have to sign you to a contract.

Richmond surely knows these things, which is why he hastily returned the discussion to how winning is what’s important. What he failed to recognize is that a backup quarterback who’s a cancer in the locker room thanks to his blind focus on radical politics rather than the team’s goals is a lot more dangerous to winning than a lesser athlete at backup quarterback who keeps his mouth shut and works hard to help the team win.

Any NFL team who signs Kaepernick had better be prepared for an ugly reaction from the fans. And if people like Richmond don’t like it, well, maybe they can be the people who stop watching the league.

Interested in more national news? We've got you covered! See More National News
Previous Article We’re Only Nine Days Away From The Hayride’s Summer Dinner In Metairie…
Next Article I Have More Boudreaux And Thibodeaux Jokes, But First This…