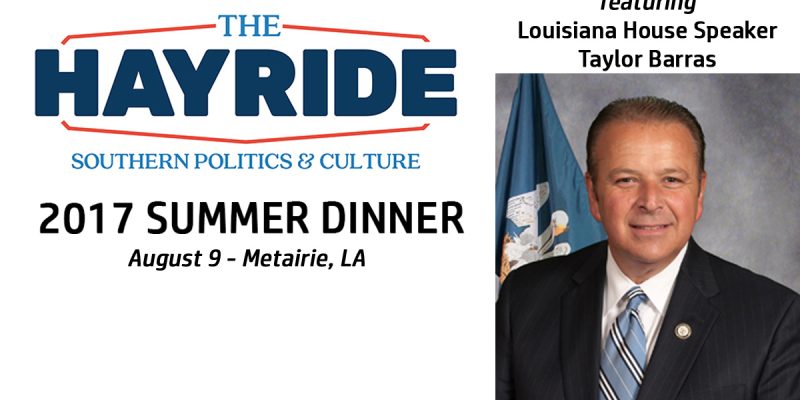 …so if you haven’t purchased your tickets yet, you should do that now. When we did the Hayride Spring Dinner in Baton Rouge, the reviews were quite positive; we expect they’ll be similar for the Summer Dinner.

Tickets are $80. The event will be held in the ballroom at 580 Woodvine Avenue in Metairie. Doors open at 6 p.m., and the event will continue unti 9 p.m.

After all, the event will be headlined by Louisiana House Speaker Taylor Barras. Barras has gone from a fairly mild-mannered banker from New Iberia to a controversial figure on the state political scene, less by virtue of his own actions and more because of the way Gov. John Bel Edwards and the state’s media have attempted to destroy him. Barras has survived a cascade of defamation in the newspapers and in Edwards’ press conferences, he withstood an effort at a coup to remove him as Speaker and he’s been demonized by the state’s Left, all for the sin of standing with the House majority in trying to reel in a runaway fiscal situation and put a stop to tax increases. We’re really interested in Barras’ thoughts on what he’s been through to date and what’s coming in the future to the state capitol.

Also speaking – National Review contributing editor Quin Hillyer, a Louisiana native and long-time conservative pundit, to offer some thoughts on the national political scene and where the conservative movement is headed in the age of Trump. And Daniel Erspamer, the new CEO of the Pelican Institute, Louisiana’s free-market think tank, on how we can recapture the governor’s mansion and turn a culturally red state into a truly politically red one – meaning, creating a majority for conservative change and real prosperity in Louisiana.

It’s going to be a fun night. We’ve been looking forward to it since we turned the lights out at the Baton Rouge event. So click here and get your ticket now before they’re all sold out!