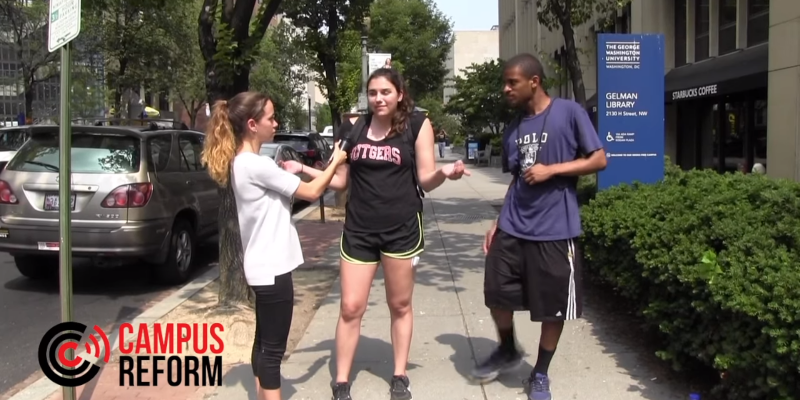 The long-term future of our country is not looking so good, based on recent polls – in particular, a poll conducted and filmed by Campus Reform (which can be seen at the bottom of this post). They interviewed students in the Washington, D.C., area to learn about millennials’ thoughts on socialism, and the answers they received were certainly telling.

The Campus Reform pollsters asked those being interviewed whether they considered socialism a good or bad thing, and every person expressed their unwavering approval. To illustrate the trend, one person said that it could “really benefit our country in the future.”

But here’s where things got interesting. Each of these people were additionally asked to define socialism, and maybe one of them was able to provide a feasible response. The rest of them answered with long pauses, “ums,” and several of them admitted to not knowing what to say at all. The one with a decent answer responded with, “Jeez, uh, I guess just, specifically, just, you know, getting rid of that wealth gap in the United States.” Let’s just say he didn’t sound really sure of himself. But we’ll give it to him anyway because it was much more than the rest of them had to offer.

This is a problem for several reasons. For one, it perfectly demonstrates one of the major problems with this generation, my own generation: there is a considerable, and disappointing, amount of us standing for causes and ideologies which we do not fully understand. And not just taking the stance, but protesting in support of these beliefs – sometimes skipping school or work to do so – beliefs which, as mentioned, many have failed to genuinely consider. It’s one thing to support an ideology as weighty as socialism, but it’s quite another to blindly commit oneself to such a movement.

What is socialism? Essentially, it’s the idea that the government should be responsible for “regulating the community.” According to Merriam-Webster, it’s “advocating collective or governmental ownership and administration of the means of production and distribution of goods.” Now, contrary to what many on the left try to propagate, Republicans/non-socialists are not just mean people who don’t want to help others and who would rather leave everyone out to dry. We think we speak for the majority of us when we say that we simply don’t want to spend our lives working, only to have that which we have rightfully earned taken away from us. Without a choice.

Which brings us back to the most crucial underlying problem with this video and what it represents. These are our future teachers, lawyers, law makers. Maybe not the specific individuals featured in this video, but there are still numerous polls with analogous results. In its article concerning this video, The Blaze cited a survey conducted just last year by Harvard University, which found that the majority of millennials surveyed, aged 18 to 29, support a socialist government as opposed to a capitalist government.

As Victor Davis Hanson, who as a Stanford professor is exposed to this phenomenon daily, noted at National Review today, the radical egalitarians, otherwise known as socialists whether they have a clue what they believe or not, are winning.

Especially in recent times, it’s become clear that the handful of people in this video do not stand alone. And while time and challenges necessitate adjustments to laws, the basic principles of our government of the people, by the people, and for the people must remain.

Interested in more national news? We've got you covered! See More National News
Previous Article Today’s Boudreaux And Thibodeaux Joke Installment, Plus The Funniest Picture In Baton Rouge
Next Article APPEL: Are The GOP Senators Really Going To Walk Away From An Obamacare Repeal?