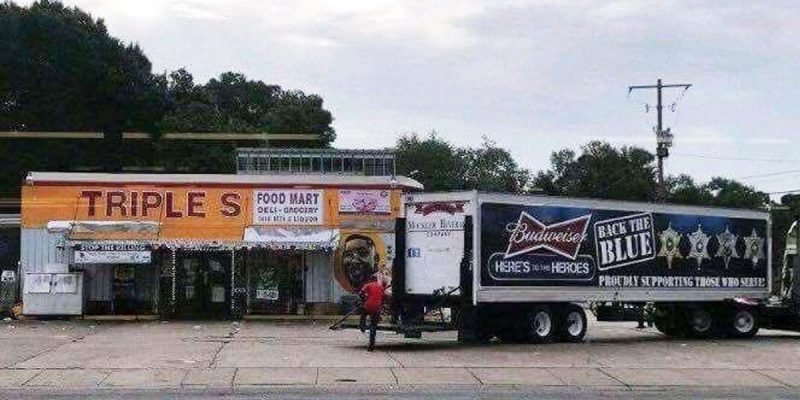 The funniest picture being the one you see above – with the Mockler Beverage/Budweiser truck dropping off beer at the Triple S store where Alton Sterling got himself shot last year sporting a big ol’ Back The Blue sign on the side.

Gotta imagine there are some mixed feelin’s in the neighborhood over that one, right? I ain’t laughed so hard since the bus with the Dudley DeBosier paintjob hit that house. This is the funniest picture since that one.

Anyhow, on to Boudreaux and Thibodeaux.

It turns out Boudreaux was out of work, but that didn’t keep him from dreaming big. So when he found an ad in the paper that said “Electrical engineer needed,” he thought a job such as that would suit him just fine. Therefore, he went to the power company and hand-delivered his resume. Mr. Don, the boss making the hire, was astounded by Boudreaux’s moxie to apply with so limited a curriculum vitae. He didn’t even have a high school diploma!

But the power company had a policy that all applicants should take a 10-question test before a hire would be made, and that would include Boudreaux, so off he went to the testing room.

Two people took the test that day. Boudreaux was one; the other was Thibodeaux who was a certified electrical engineer with a degree from Tulane.

They each took the test and returned to Mr. Don’s office to hand in their test papers. Mr. Don asked the both of them to wait outside until he was done overlooking the two exams. After about 10 minutes Don called them back in and said “Thanks to the both of you for applying for the position but, we have made our decision and that decision is to hire Thibodeaux.”

“Mais, what did Thibodeaux score on dat test?” asked Boudreaux.

“An’ what I scored, me?” asked Boudreaux.

“Den how come you gon’ hire Thibodeaux instead ‘a me?” Boudreaux demanded.

“Because on question #7, Thibodeaux answered ‘I don’t know,'” replied Mr. Don, “and your answer was ‘Me neither.'”

OK, one more and then you can scroll back to the top an’ look at the funniest picture in Baton Rouge some more…

Boudreaux an’ his best girl Claudette were making out at Claudette’s house. Boudreaux said to Claudette “I got to have you right now, cher. I got to make that mad love to you right now.”

But it wasn’t to be. Claudette replied “No, Boudreaux I ain’t giving it up to you today.” So Boudreaux got mad and left.

Boudreaux was drivin’ down the road a few minutes later and said to himself, “Self, I got to do something about this hardon I got.”

So Boudreaux had an idea. “When I get to the top of this hill I’ll pull over on side the road, get under my truck and finish myself off,” he thought. “I’ll just tell everybody I’m working on my transmission.”

Satisfied with his idea, Boudreaux pulled over and put his plan in motion. About 10 minutes later, though, Thibodeaux passed by and saw Boudreaux on side the road.

Thibodeaux stopped and addressed his friend. “Mais Boudreaux, what the hell you doin’?”

Thibodeaux replied “Mais Boudreaux, while you at it you better check dem brakes, because your truck is at the bottom of the hill.”

Interested in more news from Louisiana? We've got you covered! See More Louisiana News
Previous Article BAYHAM: Shifting Dates For Elections And A Missed Democrat Opportunity In 2017
Next Article Have You Noticed That Desiree Charbonnet Sounds An Awful Lot Like Jeff Landry?