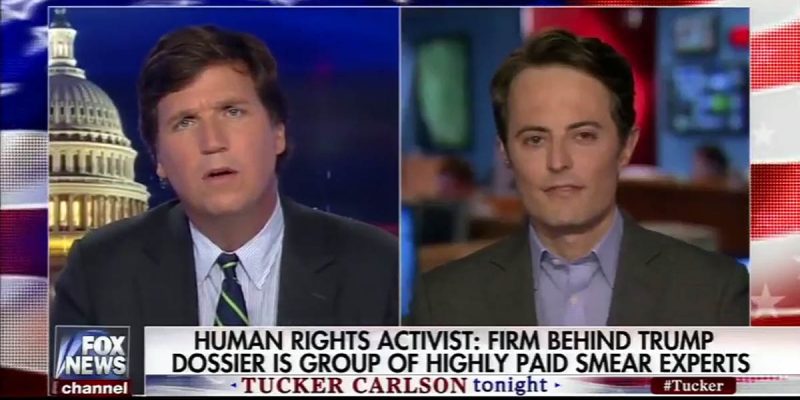 We’re following the Awan brothers scandal, which the mainstream media has no apparent interest in doing despite the fact it cuts straight to the corrupt heart of one of America’s two major political parties, but there is another meaty scandal going on in Washington which, like Awan, is far more substantial and significant than this never-ending Russia imbroglio – that being the Fusion GPS affair.

Both of the two major scandals are connected to the Russia business. It’s starting to appear that Imran Awan could well have been the source of the leak of the DNC e-mails – diagnostic research has given a strong indication that Wikileaks CEO Julian Assange was telling the truth when he repeatedly claimed that the material he was given from the Democrats’ e-mail server had been leaked rather than hacked, as it’s been claimed, and Awan had access to a computer belonging to then-DNC chair Debbie Wasserman Schultz. That gave him access to those e-mails and quite likely the entire server. We know Awan and his family were involved in lots of shady financial activities and had financial problems; there is ample reason to suspect he could have stolen the material which ended up on Wikileaks and sold it to someone who gave it to Assange. That might have been a representative of Putin’s government, or it could have been practically anyone.

And the Fusion GPS affair is connected to the Russia business because Fusion GPS was hired by the “Russian lawyer,” Natalia Veselnitskaya, whose recent fame derived from a meeting she had last year with Donald Trump, Jr., Jared Kushner and Paul Manafort, in which she apparently failed to deliver on the promise of “dirt” on the Clintons and instead chose to ramble about lifting sanctions against Russian oligarchs. Fusion GPS was part of an effort by Veselnitskaya, whose client is a Russian company based in Cyprus that was affected by those sanctions and subject to a Justice Department asset forfeiture, to repeal the Magnitsky Act. And they joined that team without filing a disclosure under FARA, the Foreign Agent Registration Act. Which is very bad, seeing as though you would expect these guys to know they were required to do so.

In any event, last night Tucker Carlson had as a guest Thor Halvorssen, who runs the Human Rights Foundation – a think tank focused on promoting liberty in countries where it’s in very short supply. One of those countries is Venezuela, which is where Halvorssen, despite his Norwegian ethnicity, was born. And Halvorssen had done some whistle-blowing on a crooked outfit called Derwick Associates, a Venezuelan firm in cahoots with the then-Chavez regime which had received a blatantly-crooked $3 billion deal to build electric power plants and had done a predictably deficient job of doing so.

For his trouble, Halvorssen then saw himself smeared and slandered in ways no human being should be subjected to, thanks to Fusion GPS. We’ll let him tell the story…

The Daily Caller had a piece Tuesday with more…

Halvorssen alleges that Fusion GPS — which was founded by a group of ex-Wall Street Journal reporters — was working for Derwick Associates when it spread false rumors in the media that he is a pedophile and drug addict. Halvorssen also details what he says was told to him by Jose de Cordoba, a Wall Street Journal reporter who worked on an investigative piece about Derwick Associates in July 2014.

According to Halvorssen, as de Cordoba was finishing up his reporting, he was called to a meeting in Caracas with Peter Fritsch, his former boss at the Journal and one of Fusion’s co-founders.

Halvorssen, who began researching Derwick in 2012 and was a source for de Cordoba, says that the reporter told him that he viewed the meeting as an intimidation tactic. He also said that Fritsch provided derogatory information about the activist and other Derwick critics.

The Daily Caller spoke to a former senior U.S. government official who said that de Cordoba also told him of the Caracas meeting. The official said that meeting was requested by Derwick’s representatives in order to stave off publication of the Journal article, which would be embarrassing to the company because it detailed a scheme to overbill the Venezuelan government billions of dollars to build power plants and provide kickbacks to Venezuelan officials.

De Cordoba’s article never appeared in the Journal, and Halvorssen claims that Fusion GPS and lawyers for Derwick successfully killed the piece by threatening legal action. TheDC was also able to view a letter that a Derwick attorney sent to the Journal the same month of the Caracas meeting.

So that’s just a taste of who these people are, and the kind of work they do. Fusion GPS is being investigated by the Senate Judiciary Committee at present, which is why Halvorssen is in the news – he sent a letter to Senate Judiciary telling his story and backed it with the Daily Caller interview and the Carlson appearance. But the major item on the committee’s agenda where Fusion GPS is concerned is the “pee pee dossier,” the debunked opposition research document on Donald Trump in which a series of outrageous allegations are made – to include that Trump had hookers urinating on hotel beds in Moscow as some sort of sexual kink being played out. Nothing in that dossier appears to be true, as none of it could be confirmed independently though the anti-Trump media tried. It seems Fusion GPS hired Christopher Steele, an ex-British spy, to put the dossier together and Steele’s work drew from sources left over from his time in…if you guessed Russia, you win the prize.

Glenn Simpson, Fusion’s co-founder and CEO, was summoned to testify to the committee and threatened to take the Fifth until a deal was reached for him to testify privately.

These guys are dirty. Exceptionally so. The media ought to be covering their scandal, particularly given the bad information they’ve been feeding into the data stream and the loss of credibility of a number of media outlets Fusion GPS’ work has caused. But we don’t expect much in the way of results on that count. It might be up to the Senate, and the Justice Department, to get to the bottom of their shenanigans surrounding the 2016 elections.