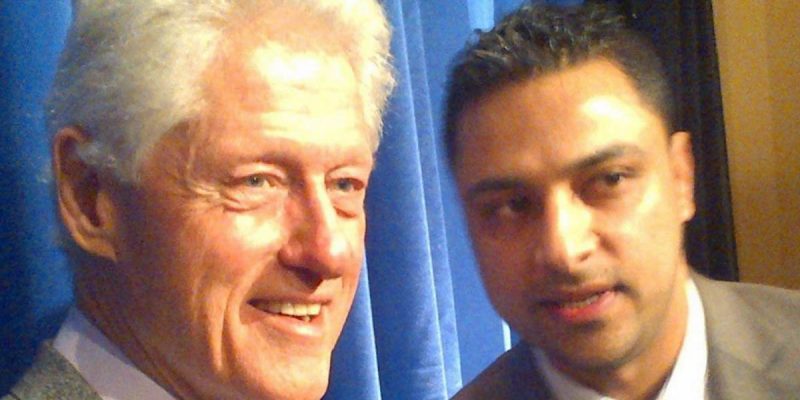 There are so many wild hairs of information emanating from the Awan Brothers case, and Imran Awan, the central figure in it, in the last day or so that it’s hard to get at all of them.

But let’s start with the statement by the attorney for Imran Awan, who was arrested at Dulles International Airport on Monday as he attempted to flee the country, hat was released yesterday. Read it, and then below we’ll discuss the context around it. 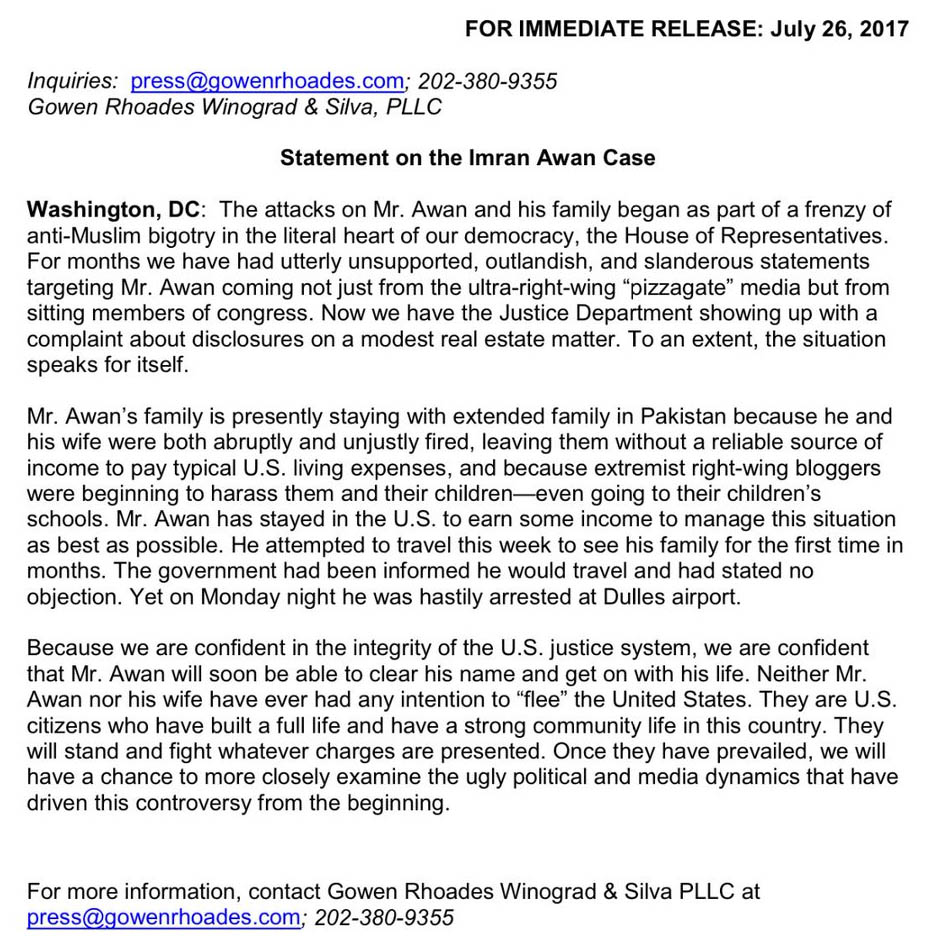 If this reads to you almost as a Clintonian mix of hyperpartisan clownery and implausibly false contentions, that’s because it is just such a mix. Literally. It turns out that Awan’s attorney is one Chris Gowen, who’s a former Bill and Hillary minion. From the Daily Caller, via Ace of Spades…

Chris Gowen, Imran Awan’s lawyer, is a long-time campaigner for former President Bill Clinton and former Secretary of State Hillary Clinton and a member of an attorney team that brought a fraudulent lawsuit against energy giant Chevron.

Gowen described Awan’s arrest as “clearly a right-wing media-driven prosecution by a United States Attorney’s Office that wants to prosecute people for working while Muslim.”

His official bio on the firm’s web site notes that he “left the Public Defender’s office to work for former President William Jefferson Clinton and then-Senator Hillary Clinton. Chris was a fact checker for President Clinton’s memoir, My Life.”

“He also served as a traveling aid for President Clinton’s national and international trips. Chris finished his tenure with the Clintons by directing the advance operations for then-Senator Hillary Clinton during her 2008 presidential campaign.”

Gowen learned the Clinton craft well, though one wonders whether putting out hyperpartisan and clearly mendacious politicized press releases is a particularly smart legal tactic. His client, who was caught attempting to leave the country after he’d wired almost $300,000 to Pakistan in fraudulently-obtained cash, doesn’t have political problems, after all. He has legal problems. Bank fraud doesn’t know from Islamophobia.

“On January 18, 2017 at 12:09 pm, an international wire transfer request form was submitted [at the Congressional Federal Credit Union] at the Longworth House Office Building in the District of Columbia, in the amount of $283,000.00, to two individuals in Faisalabad, Pakistan,” according to an affidavit obtained by TheDCNF.

Apparently, that money came from a fraudulent mortgage Awan had taken on a piece of real estate he purported to own – which is a practice the Awan family has repeatedly used to generate cash in a not-quite-honest fashion…

As The DCNF has reported, the Awans own numerous rental properties that often have multiple mortgages taken out on them, and they have told renters they want payments in untraceable ways. The charging documents say Imran’s wife Hina Alvi, who also made $165,000 working for House Democrats, took out a second mortgage against a house from the Congressional Federal Credit Union by falsely claiming it was her “principal residence” and that she will “occupy” the property, and also fraudulently reported no rental income on her taxes.

A renter told the FBI “they paid approximately $2,000 per month for rent and that the rent check was written to Suriaya Begum. Based on information and belief, I know that Begum is Alvia’s mother,” an FBI agent wrote.

The agent also said Imran appears to have applied for the loan in his wife’s name.

That’s why the bank fraud charges. From the horrendously bland Amazon Post story on Awan’s arrest…

A congressional information technology staffer was arrested Monday evening before a scheduled flight for Lahore, Pakistan, and charged with bank fraud in connection with a $165,000 loan from the congressional Federal Credit Union, authorities said.

Imran Awan, 37, pleaded not guilty Tuesday before U.S. Magistrate Judge G. Michael Harvey in Washington and was released to a high-intensity supervision program whose conditions include GPS monitoring, a nighttime curfew and staying within a 50-mile radius of his home in Lorton, federal prosecutors said. He was arrested at Dulles International Airport, his attorney said.

Awan and his wife, Hina Alvi, allegedly secured a $165,000 home equity loan in January from CFCU on a house in Alexandria after claiming it was their primary residence, when it was a rental property, FBI Special Agent Brandon C. Merriman wrote in an affidavit for Awan’s arrest. The couple told the credit union to wire the money to Pakistan for use in purchasing a property, Merriman wrote.

That WaPo story contains precisely nothing about Imran Awan’s other activities – the ones which made his legal issues interesting in the first place, and which might make him the most consequential figure in American politics this year before it’s all said and done. There is no mention of Awan and his family members running a little information-technology empire as consultants and staffers for some 80 Democrat House members, the Capitol Hill police investigation into their alleged theft of Congressional computer hardware and far worse allegations of improperly accessing and downloading classified information from their clients’ e-mail servers (some of those clients having been on the House Intelligence Committee), the possible contamination of the e-mail servers of other House members not clients of the Awans, and perhaps a connection between the Awans and the DNC e-mail leaks, since Imran Awan is said to have had access to his main client Debbie Wasserman Schultz’ iPad from which she used her email as head of the Democrat National Committee during the time those leaks occurred.

What we now know of the state of the DNC e-mail “hack” is the contention it was the Russians’ responsibility rests on a shaky foundation. At one time it was purported that there were 17 intelligence agencies agreeing the Russians hacked the DNC; that’s been dropped, and the tally was just three – the FBI, compromised as we know it had been during the Obama administration, the CIA and the Office of National Intelligence. In other words, we’re to believe the Russians hacked the Democrats’ e-mail server based on the word of James Comey, John Brennan and James Clapper. Worse, none of those agencies or any other law enforcement arm has actually seen the DNC server; the DNC refused to allow them to. Their contention the Russians did it comes from an examination performed by a contractor hired by the DNC to look at the server, and that contractor has even walked back any conclusions it made.

Meanwhile, a man supposedly tied to the Pakistani ISI, that country’s intelligence agency, who also has connections with Hezbollah and the Muslim Brotherhood and has been accused of pirating sensitive American government information for profit, and who has had long-running financial problems leading to multiple bankruptcies involving himself and his family members, had access to the DNC’s e-mails through Wasserman Schultz. And somehow the Washington Post doesn’t find any of this newsworthy when there has been an investigation into the Awan brothers’ activities since February.

Here are a couple of things to consider as this story develops.

First, Imran Awan isn’t allowed out on bond after being arrested trying to flee the country unless a deal is cut. Our bet is he’s rolled on someone – it could be Wasserman Schultz, or it could be any number of his other clients whose e-mails Imran Awan had access to. One of the allegations made about Awan is he was blackmailing some of the Democrats in Congress with information he had about them, and particularly some of the members of the Congressional Black Caucus – the Awans had a large number of CBC members as clients, including CBC chair Cedric Richmond. The blackmail scheme goes out the window when the feds pick him up at the airport and there are multiple investigations afoot – now he could be trading those clients out.

And if that’s true, the second part is that Awan needs a good security system and a food taster. Because the list of people with dirt on the Clinton wing of the Democrat Party who have met with unfortunate accidents is exceptionally long. We’d hate to see anything bad happen to Imran Awan before he could fully inform law enforcement of what he knows.