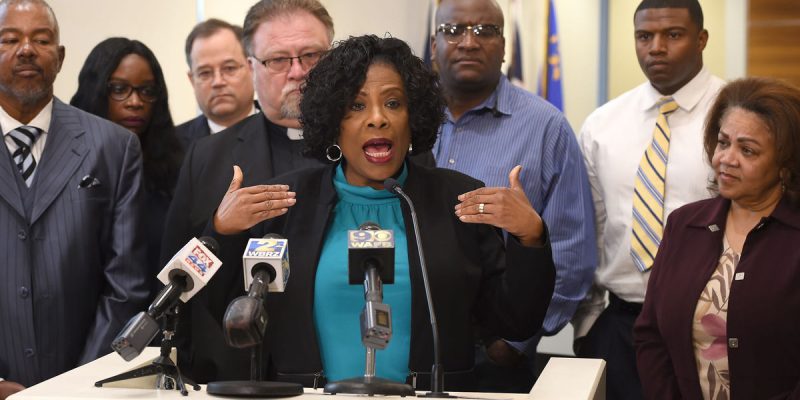 Every once and a while we get a glimpse into the deep-seated hatred that resides in many of the hearts of the anti-police, hard left, social justice warriors. When we do it is startling.

There are reports Reed’s comment caused Metro Council members to gasp in shock. But is this really that shocking?

We’ve seen the social justice movement give rise to widespread hatred of police that has led to everything from cops being insulted at fast food restaurants, to Black Lives Matter protestors chanting “Pigs in a blanket, fry them like bacon,” to police being gunned down in record numbers for the sole reason they are cops.

The anti-cop movement is based on anger often bordering on pure rage. The Black Panthers, Black Lives Matter, and other far left groups whip protestors up into a frenzy often leading to property damage and violence. They play right into the “you are a victim” message which is so debilitating for those who fall for it.

Think about that for a minute. A man who calls the ambush of police officers justice is given the job of help determining when they can and cannot use force.

What does that tell you about Mayor Broome? Why would she put someone like Reed on her task force? Will she come out and condemn Reed’s calling the ambush and killing of Baton Rouge police just? Or will she remain silent? Here’s what Broome said last night, courtesy of WBRZ…

Thursday, hours after the meeting, the mayor’s office issued a statement and said the two were no longer associated.

“The remarks made at last night’s Metro Council meeting by Arthur ‘Silky Slim’ Reed were hateful, offensive, and frankly unacceptable,” the mayor’s office said in a statement.

“Reed previously served on an advisory board earlier this year focused on police and community relations. That committee, which was made up of law enforcement, faith-based leaders and community leaders was disbanded earlier in February. At the time, he was thought to be a person dedicated to improving police-citizen relations.”

The mayor’s office also said Reed’s contract with the BRAVE crime fighting program where he worked as a street counselor was canceled, too.

“The remarks made last night in no way reflect the views of my administration or the people of Baton Rouge. The memories of the fallen officers who were killed in the line of duty, protecting the citizens of Baton Rouge, should be honored and preserved,” the mayor said in the statement.

That’s a long time in coming, for certain. And it doesn’t address the irresponsible statements made by others she’s associated herself with. Where is the disassociation from Gary Chambers, for example. Or Rev. Reginald Pitcher?

The thing is the hate-fueled rhetoric from Reed and his enablers like Broome is dangerous and has already led to the death of three Baton Rouge cops and many more nationwide.

This cop-hating movement is consequential in so many ways. Not only does it lead to politicians like Broome tying the hands of police, but it takes the focus away from the real dangers in crime-ridden neighborhoods. Namely, the gun-toting gang bangers who have no regard for life, limb, or property.