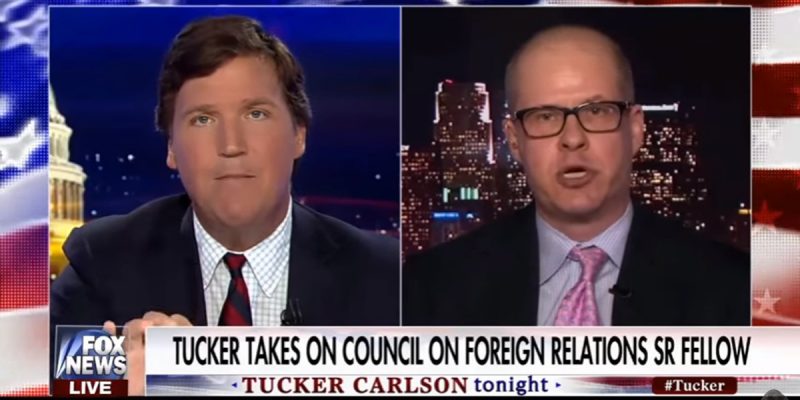 Last night Tucker Carlson had Council on Foreign Relations fellow and foreign policy pundit Max Boot on his show to talk about Russia, and what resulted has generated quite a bit of water-cooler discussion.

The Carlson-Boot exchange went for about 10 minutes, and it can fairly be described as a food fight. Nobody comes off particularly well in it, though it’s a pretty reasonable conclusion to say Boot’s performance was worse than Carlson’s.

Here’s the clip. More below…

Boot is a neoconservative figure, to say the least – if there is such a thing as a hyperneoconservative, it’s probably Max Boot. That doesn’t mean he’s wrong in every regard, as Carlson accused him of being, but it does mean that when he makes bombastic statements about foreign policy issues his listeners and readers are entitled to take them with a grain of salt.

And Max Boot has been over-the-top in his statements castigating Russia.

Contrasting him with Carlson, whose own line on the Russians is considerably softer – mostly because Carlson isn’t particularly convinced of the veracity of the claims that “the Russians hacked our election” – produces the heated argument above.

It is worth questioning, though, whether the Russia hawks have much in the way of a foreign policy approach toward Vladimir Putin and his regime which is superior to that President Trump has on offer.

We are now promoting exports of natural gas to Europe in order to challenge Russian hegemony in the European energy markets, and we are helping European countries like Poland and Romania to develop domestic sources of natural gas.

We’ve recommitted to NATO and have troops stationed in Poland, as a show that Putin cannot bully the Poles as he’s done to the Ukrainians.

We’ve congratulated the Poles for taking a firm line against bringing in Muslim migrants who destabilize the local culture and create a security issue as they’ve done in Sweden, France, Germany, Italy and Holland.

Trump went to Saudi Arabia and demanded that Muslims nations get a handle on the global jihad, and stop exporting it to the West.

We’ve signed a cease-fire with the Russians in Syria, in an effort to lower the temperature there.

Which of those statements and actions would Boot challenge? The last one? Would he prefer an air war between the U.S. and the Russians in Syria? How would that serve American interests? Otherwise one would have to argue Trump’s policy toward the Russians is at least satisfactory. If nothing else, he at least hasn’t visited them with a stupid red plastic button and offered to unilaterally withdraw sanctions put in place as a response to the Russian invasion of a sovereign neighbor like Trump’s predecessor did.

It’s unfortunate to see so contentious an exchange between two figures on the Right, just as it was a bit painful to see Carlson and Ralph Peters at each other’s throats earlier in the week. But as conservatives recalibrate a consensus on foreign policy after what can only be considered a failed approach under George W. Bush, such battles are inevitable.