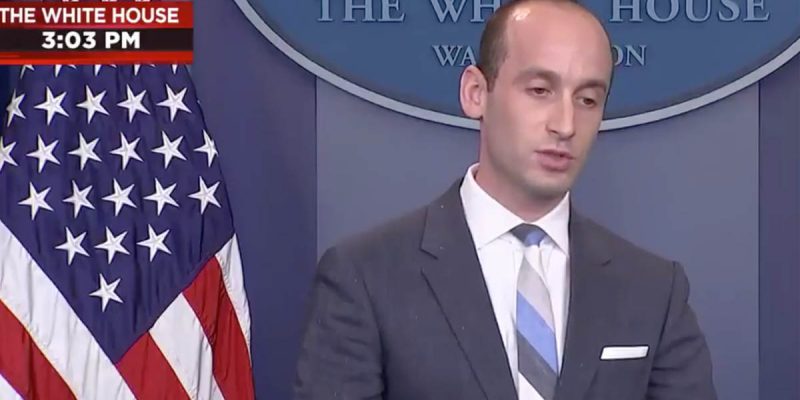 White House senior advisor for policy Stephen Miller was addressing the White House press corps today, on the occasion of the introduction of the RAISE Act, a bill by Sens. Tom Cotton and David Perdue which would make significant changes to federal immigration policy. The Trump administration collaborated in writing RAISE and fully supports the bill.

Miller was laying down the precepts of RAISE, which stands for Reforming American Immigration for Strong Employment, and explaining why it’s a piece of legislation the administration wants to pass. Essentially, the bill would move the country away from its current “chain migration” policy, in which family ties to American citizens serve as a primary driver of who gets a green card and who doesn’t, and toward a more merit-based system in which marketable skills, mastery of the English language. RAISE would also curtail welfare payments to new green card holders; there is an amazing statistic noted by the bill’s authors that some 50 percent of immigrant families receive some form of welfare while that number is only 30 percent for non-immigrants.

Moreover, RAISE would essentially cut in half the number of legal immigrants America takes in – one assumes the marketable skills and other merit requirements would cut out the half who are currently taking welfare. Miller’s briefing indicated the White House believes that chopping down the number of low-skilled and economically-challenged immigrants coming into the country would also have the effect of putting more native-born Americans to work, and furthermore creating conditions that would lift the wages of those Americans.

Which is basic economics. What RAISE would do would be to create something of a labor shortage on the lower end of the economic scale, forcing companies who need low-skilled workers to offer higher wages in order to attract entry-level employees. With a never-ending flood of immigrants willing to undercut natives in those jobs, downward pressure on wages will persist. This has been the case for most of the last two decades, and wages, and median household income, in America have been stagnant to lower as a result.

Miller is noting these things which are quite obvious to the thinking person, but the New York Times’ Glenn Thrush, whose partisan Democrat bias has been apparent for some time, attacks him by declaring that there isn’t a correlation between a loss of jobs for native-born Americans and the importation of lower-skilled immigrants and then demands he produce evidence to that effect.

Miller corrects Thrush for that statement, and then as the back-and-forth becomes heated he drops a bomb at least half the country has been begging for since the current immigration debate began a decade or so ago…

“Glenn, maybe we’ll make a carve out in the bill that says The New York Times can hire all the low-skill, less-pay workers they want from other countries and see how you feel about low wage substitution, this is a reality in our country. Maybe it’s time we had compassion, Glenn, for American workers. President Trump has met with American workers that have been replaced by foreign workers.”

That’s a restatement of sorts of Ted Cruz’ famous message and ad in the 2016 presidential primaries in which illegal immigrant bankers, lawyers and journalists in suits were depicted crossing the border and Cruz mused about how that “economic calamity” would be covered.

Naturally, the RAISE Act and the Trump administration’s support for it have been castigated as racist by the usual suspects, even though Miller noted in his presentation, which the video below contains, that the administration believes black Americans, and particularly male black Americans, will be one of the primary groups seeing better access to the workforce and the economic ladder as a result of the bill. Some racism.

UPDATE: More leftist advocacy came from CNN’s Jim Acosta, and he didn’t fare any better than Thrush did…