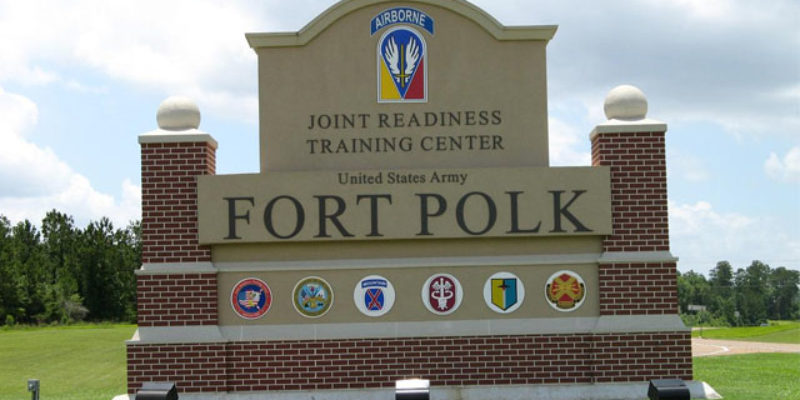 …along with seven other military bases in Southern states, because Fort Polk, like Ft. Bragg and Ft. Benning and the other five, is named for a Confederate commander.

There are eight U.S. Army bases, all located in Southern states, named after Confederate generals: Fort Bragg in North Carolina, Fort Benning and Fort Gordon in Georgia, Fort Polk in Louisiana, Fort Hood in Texas, Fort A.P. Hill and Fort Lee in Virginia, and Fort Rucker in Alabama. In addition, several National Guard facilities, such as Fort Pickett in Virginia and Camp Beauregard in Louisiana, bear the names of Confederate generals.

It seems odd that the U.S. Army ever considered naming its bases after men who, by definition, conducted war against the United States. It seems even odder that a military force in which racial minorities comprise one-quarter to one-third of the force would be asked to serve on bases named after men who fought to maintain slavery.

Fort Bragg in North Carolina is a case in point. Fort Bragg is home to the U.S. Army’s airborne and special operations command and is the largest military base (by population) in the world. It was created during World War I — one of dozens of new camps created after U.S. entry into the war to facilitate a rapid expansion of the armed forces.

Many of these new bases, Fort Bragg included, were established in a hurry. The land near Fayetteville was identified, acquired and designated as Camp Bragg all within a few months in the summer of 1918.

According to a War Department order, Camp Bragg was named for “Capt. Braxton Bragg, who, while commanding Battery C, Third Artillery, rendered signal service at the battle of Buena Vista, Mexico” in 1847 during the Mexican-American War. While it is undeniable that Bragg was a hero of the Mexican-American War, his greater fame was as one of a handful of full generals in the Confederate army, even though his field commands were generally unsuccessful and his relations with subordinates often tumultuous. A recent biography of Braxton Bragg is subtitled “The Most Hated Man of the Confederacy.”

Fort Bragg, along with Forts Benning, Gordon and Lee, were all established during World War I. When they were created, it was the policy of the Army and the War Department to name camps in Southern states after Confederate commanders, though this policy was followed intermittently. The War Department established a Camp McClellan in Anniston, Alabama in 1917, named after the commander of the U.S. Army of the Potomac during the Civil War. The other four forts listed above were established in the 1940s.

The Department of the Defense and the Army have been adamant that they will not consider renaming the existing bases named after Confederate generals. The Army recently refused to change street names at Fort Hamilton, New York, named after Confederate generals Robert E. Lee and Stonewall Jackson, because they honor Lee and Jackson “as individuals, not as any particular cause or ideology.”

This, plain and simple, is rubbish. During World War I, the policy to name new Southern army camps after Confederate commanders was intended to effect a reconciliation between the North and the South, where bruised feelings about the Lost Cause were potent and widespread. The names were chosen, at least in part, to encourage Southern buy-in to the nation’s new war. These names were chosen precisely because the men honored had been Confederate leaders.

Between the Mexican War and the Civil War, Braxton Bragg lived the life of a genteel planter on a sugar cane plantation in Louisiana where slaves put in backbreaking labor in unspeakable conditions to bring molasses to market and earn Bragg a profit. He met any Northern criticism of slavery with harsh criticism.

The writer of this screed is Michael Newcity, who teaches Slavic and Eurasian Studies at Duke. Duke is in Durham, North Carolina, where a mob of unhinged leftist vandals pulled down a memorial to confederate soldiers on Monday. Duke is also the place where a set of false accusations of rape made by a black prostitute eventually convicted of murder were used to touch off a feeding frenzy among the faculty which led to the disbanding of the school’s lacrosse team.

We didn’t find any evidence Newcity was involved in that feeding frenzy, or that he’d served at Fort Polk or any of the other bases in question. This might be his first foray into activist idiocy. Here’s what we found on him. He teaches crip courses which meander outside of their syllabi and result in A’s and B’s for all the bored students in them. A bit more is demanded of the inhabitants of Fort Polk.

What ought to be remembered, though, is none of this is about the Confederacy. Those things happened 150 years ago and before today’s social justice warriors came on the scene those wounds had healed. The South was allowed to celebrate the cultural aspects of the confederacy but not the racism or political system which led to its secession, and as such the South managed to climb out of 100 years of backwardness and poverty. Nobody much cared that there were a few statues here and there.

Yesterday President Trump made an excellent point when he asked what’s next after all the Robert E. Lee statues come down. Is Thomas Jefferson next? Is George Washington? A crowd of morons in New York just demanded Teddy Roosevelt’s statue come down. Max Madison, which is a pseudonym for somebody else, had a spot-on piece at American Greatness noting that this is about the Left’s revolution, not the Confederacy…

Of course, engaging in the glorification of slavery is bad. But is that still happening across our society? Do any but a small group of fringy losers wish to do this?

If we tear them down now, should we not then tear down the pyramids? Trust me, no vestige of Western Civilization could not be destroyed on the same premise. Every castle in Europe occupied by a despot, every church, every document, every classic work of literature would be vulnerable. In a world where a few degrees of separation join all things, guilt by association can be used to criticize anything and anyone. All will be just a degree or two away from something that can be demonized.

Look what’s happening to football; to the definition of family and gender; to every holiday. Anything can be destroyed if the standard is that it can be related to something bad in any way. Guess what that includes? Everything. SJWs in South Africa are going after Isaac Newton and gravity as “western colonial science.”Get it? Nothing is off limits. Not. A. Single. Thing.

This is about enshrining the Left as The One True Religion. They will replace everything with their own cultish iconography. They will likewise replace all ideas with their own. The fight over the Google memo is identical to this fight. It’s about declaring all things non-leftist outside the scope of legitimate debate including debate and reason themselves. This is not about the Confederacy. That’s yet another in a long, long, long list of fronts. It’s about the existence of anything outside of Leftism. It’s about eliminating debate and installing a global Religion of Leftism. And make no mistake, that religion plans on replacing monuments, books, science and facts, liberty, the concept of natural rights, the rule of law, free speech, Christianity, the United States as a sovereign entity, Europe, and all of Western Civilization. In fact, if you defend any of those things, you are a nationalist which, we are now supposed to believe, is just code for white supremacist and bigot. You must go. You must be replaced.

Supremacist ideologies, by definition, brook no opposition. You are in the group or you’re not. This is no different. And the Left has done this before, many times. Pol Pot, the French Revolution, Mao, Lenin. The push to erase history and start over as a means of revolution is not new by any means. And if you think they have some limit, look to these past revolutions to see that they simply do not. The ideology is self-reinforcing towards runaway radicalism. That’s how Spain ended up digging up nuns to mock religion. The only thing that stops the runaway revolution is pushback prior to its takeover or burnout long after it takes over and fails. It has no internal limits. Limits such as historically recognized morals, established religions, the constitution or even culture, tradition or biology, are all seen as impediments. Moral relativism is the unmooring from these to allow for revolution. Leftist targets are not chosen to promote some moral imperative. They are chosen because they are competition or can be connected to one, even if falsely.

At this point it’s not even about slavery, the Confederacy, Fort Polk or Robert E. Lee. It’s about telling the crybullies on the Left to do something anatomically impossible and denying them the power they seek.

I say this over and over, and I’m not alone. You might think today’s cultural aggression has some merit to it. But if you follow the “logic” behind that aggression to its most absurd end, you will come upon tomorrow’s cultural aggression. Because there are no limits and there is no consensus to be had. There is only a never-ending destruction of our social compact, until we are all at each other’s throats and only an all-powerful government can bring peace among us.

If Professor Newcity is to achieve his goal of renaming all those military bases, surely he’s willing to sacrifice something to achieve that end. Let’s see what he proposes in trade.