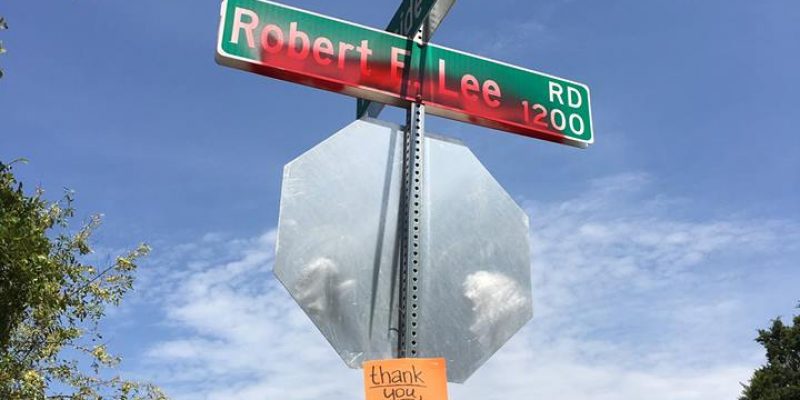 After recent violence in Charlottesville, VA the city of Austin, TX is preparing to rename Robert E. Lee Road in South Austin.

Speaking of the recent attack, City Council Member  Kitchen said, “Seeing the hatred and the violence there, it should shake us all to our core. It is incumbent on all of us in the country to stand up and say: This is not who we are.”

Robert E. Lee Road is located in Kitchen’s district and she plans to bring the application to change the name.

The violence in Charlottesville began when a group of white supremacist protested the removal of a statue in honor of General Lee. A car bulldozed into counter protesters killing one young woman and injuring 35 others.

Austin has no connection with the confederate general Robert E. Lee, and yet we have a prominent road near Zilker Park named for him. It is way past time that a progressive city such as Austin abandoned such a memorial to a confederate traitor, and used that space to commemorate a more local hero who was on the right side of history.

We propose changing the name of Robert E. Lee Road. One possibility would be change it to Fritz Teneger Road. Teneger was the leader of a group of hill country Unionists who all refused to take an oath of loyalty to the Confederacy, and were then chased down and killed by confederate troops in battle. He would make a fitting figure to commemorate here. But the final name should be the result of community input.

In light of the horrific events in Charlottesville, VA, now is the time. Please join us in urging the Austin city council to make this change.

Austin Mayor Steve Adler said he wanted to rename the road as well “to state strongly and clearly that ours is a community where there is no place for hate.”

An online thread on the Reddit sub r/Austin has recommended changing the name to Whataburger Road.

It will likely take months to determine what to rename the road as community feedback, safety concerns, and other issues must be considered.