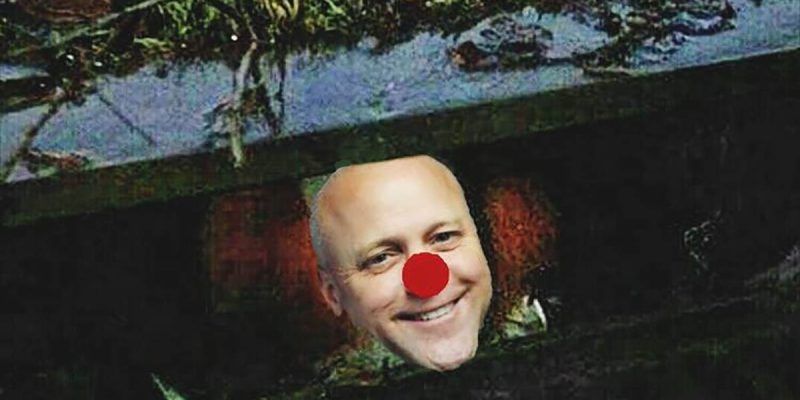 New Orleans’ drainage system is in disrepair and Mitch Landrieu’s people simply don’t care. Of 65,000 catch basins in New Orleans, an estimated 15,000 are clogged and 2,500 are on the city’s list to clean.  The city has five vacuum suction trucks to clear out the mud, crud, and debris that gets lodged below the surface.  But only three were in service, and then a sixth was ordered because one of the other five is old.  So in the end it will likely be five if you can follow this shell game that would impress a magician.  Equipment numbers aside, according to the Landrieu administration: “DPW cleans an average of 5.6 catch basins per day per vacuum truck crew.”

City Council champion of responsible government Stacy Head challenged the Public Works management the week before the August 5th flood, asking why $3 million budgeted for storm drain cleaning went unspent this year.  Nevertheless, after Mitch’s Flood, the Council approved an emergency $22 million to get the drainage system up to speed.

And rest assured, Landrieu Concrete & Cement Industries has been at the pump station at South Claiborne as evidenced by this picture… 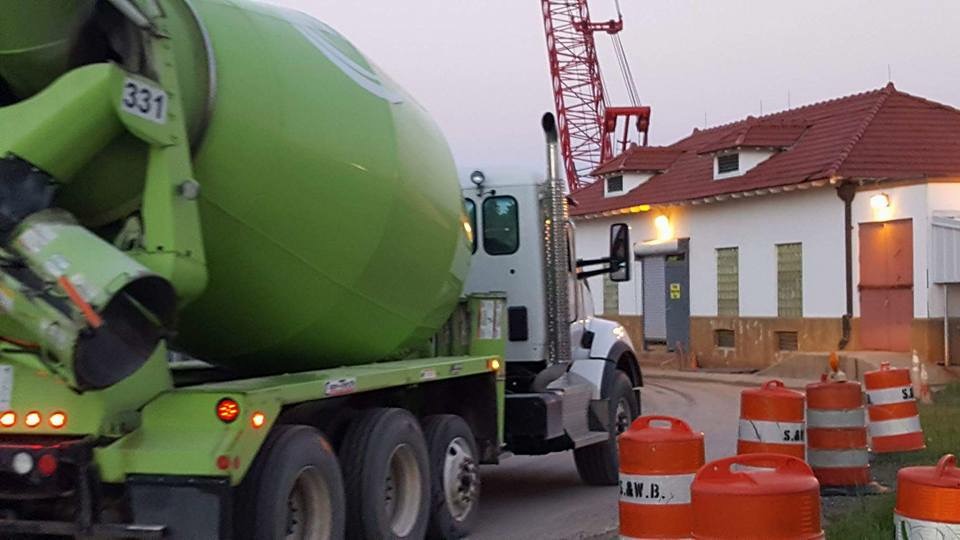 Driving along Elysian Fields Avenue near Claiborne at 10:10 am on Aug 25, a New Orleanian took this picture of nine workers watching one man work.  This is how Mitch spends $22 million in taxpayer money.  This is Mitch taking responsibility.  This is Mitch’s team in emergency mode.  This is why streets flood in afternoon summer storms. 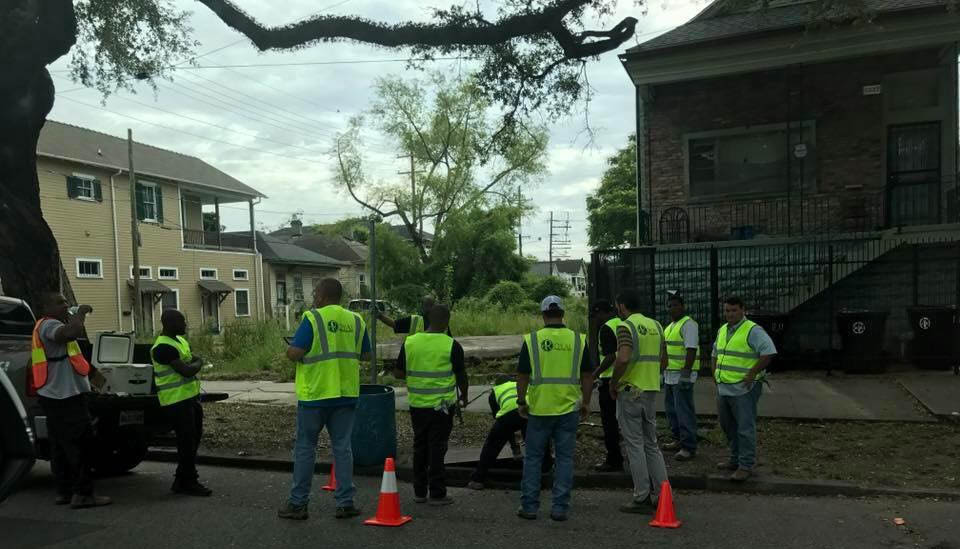 When Landrieu or Cedric Grant or whomever makes a statement that the pumping capacity is at 57%, that is not factoring in the thousands of clogged drains and pipes that have been neglected through Mitch’s 7+ years as mayor.

Instead of fixing the city, Mitch focuses elsewhere like removing historic artwork, making dozens of national news appearances, traveling to D.C. and Aspen, and announced his green initiative “Climate Action Strategy” for the Sewerage and Water Board.  Meanwhile the city’s arteries are clogged.

One motivated New Orleans citizen decided to see what he could do to help. Darius Munchak , a transplanted resident, decided to clear out his storm drain on the corner of Sixth and Carondelet Streets.  Munchak documented his work on social media.

He shoveled out mud, pulled out litter and trash, pried with a crowbar, had to leave the site to get a saw to cut through a root system, but he persisted. Munchak emptied 15 five-gallon buckets of debris.  In 68 minutes one man completely cleared one storm drain.  The city clears 5.6 per day per truck.

Some of the comments Munchak posted to his album Catch Basins 101 read:

“You actually have to work and get a little dirty. Use the shovel and scoop all the crap out of the hole and put it somewhere else. … Roughly half of what I shoveled out was man made and could have easily found its way into a trash can and not into the basin. … (when finished and cover replaced) it looks about the same as when I started, because all the issues were below the surface. Maybe that’s part of the problem. Out of sight out of mind. … I didn’t have a saw on my original materials list and had to walk a block to get one. Had I been better prepared, I could have done this in under an hour. … I am fairly confident I can do 7 in a day alone with a shovel and still have an hour to sit under a tree and eat my lunch.”

But the city needs $22 million to get this right.  $7 million to assess and clean; $13 million to repair the basins.  And those work crews stand around watching people work at a 9:1 ratio.  The city should try a bounty program.  $50 per storm drain cleared, the numbers would drop.  Or just pay the vacuum truck employees by how many they clean per day.  Incentivize it.  Or just keep doing 5-6 per day and be satisfied with the city flooding, Mitch.

The scary part is how out of touch the city government is with its own failings.  Citizens are diagnosing these problems, not Mitch Landrieu.  New Orleanians were infuriated over the pumps not being on, the city said they were.  Residents rejected that and pushed for more information.  The city’s drainage system is clogged below the surface, the city didn’t use money to fix it.  People want the drainage fixed, “The city was going to flood anyway from this particular event,” Landrieu told reporters when he returned to the city the Monday after the Saturday, August 5th flood.

Reading back over Mitch and his staff’s comments is frustrating.  He actually blamed the city’s flooding on a 1992 vote that failed.  Why give the city more money, especially after seeing how city employees work?  Then Mitch bragged about winning $2.4 billion for the streets and $350 million “to do all this stuff.”

“No one can say with a straight face that we have not worked hard and successfully secured record amounts for infrastructure and spoken almost weekly about the need for more, often specifically for drainage.”

Yes, Mr. Mayor, anyone and everyone can say with a straight face, deadpanned look that the city has not worked hard.  Also, “speaking” is not “doing.”

Cedric Grant blamed the flooding on “the era of climate change.”

All these government employees accept the flooding as a regular occurrence that can’t be fixed.  It’s something citizens just have to get used to.  Lucky for New Orleans, the end is nearing and the guillotine will drop.  But when Mitch and his cronies go, the city will be left in its third world state, the same as when he came in.

Streets are deplorable.  Crime is out of control.  Property taxes are up.  Police numbers are down.  The pumps don’t work, and water can barely drain and flow to them.  This is how New Orleans heads into its 300th year.  Thank God those Nationally Registered statues are down though, now people will want to live here again.