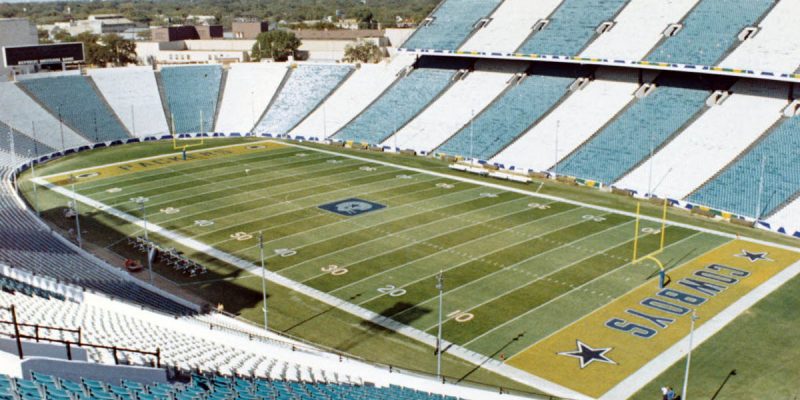 It’s patently obvious that thanks to Hurricane Harvey, Saturday’s LSU-BYU game won’t take place in Houston, though as of this writing the venue for the game has yet to be announced. Sunday night it seemed quite likely the game would be moved to New Orleans, as the Mercedes-Benz Superdome is available and is actively campaigning to host it.

But an eastward shift in Harvey’s forecast track overnight has the event organizers considering other options – and three in particular have surfaced. None seem like great ideas.

First, there is Dallas – but not necessarily at AT&T Stadium…

ESPN has reached out to Cotton Bowl Stadium in Dallas about hosting #LSU–#BYU game on Saturday. Stadium is looking into what they can do.

The Cotton Bowl hasn’t been decommissioned as yet. It still hosts the annual Red River Showdown between Texas and Oklahoma, and there is a Grambling State-Prairie View A&M game scheduled there on Oct. 7. In addition, the Cotton Bowl also hosts the Zaxby’s Heart of Dallas Bowl annually as well – last year Army knocked off North Texas in overtime. And with a seating capacity of 92,100, it can more than handle the crowd for the LSU-BYU game if it’s moved there.

The current forecast for Dallas on Saturday calls for only a 20 percent chance of rain, so as of right now the Cotton Bowl could be viable assuming enough support staff and security, etc., can be summoned for the game. Dallas is an easy destination for fans of both LSU and BYU to reach, and both schools have significant alumni presences in that city (LSU more than BYU, obviously). A reasonably good crowd could be expected for the game at the Cotton Bowl, though probably not as good a crowd as it could draw in New Orleans.

Another option seems less competitive – that being Nissan Stadium in Nashville.

In Nashville, Scott Ramsey, president and CEO of the Music City Bowl, says his staff is still evaluating whether they could host a game, checking availability of police, hotels and other personnel. He plans to report back to the SEC and ESPN later Monday. He did not know their timeline.

“We’ve got sort of a checklist,” he said. “We’re working through that today.”

No offense to the Music City, but any objective analysis would indicate it’s an uncommonly dumb idea to move the game there. The current forecast track of Harvey indicates the storm will be over central Tennessee on Saturday, and Nissan Stadium is an outdoor venue. It makes zero sense to put the game in an outdoor stadium when the forecast calls for heavy rain – and furthermore, neither LSU nor BYU have a significant fan or alumni presence there, meaning it’s a guarantee that the stadium will be empty. The only positive to Nissan Stadium is an irrelevant factor; namely, that the Tennessee Titans are playing on Thursday night.

Finally, Camping World Stadium in Orlando is being mentioned as an LSU-BYU venue.

Camping World Stadium isn’t being used this weekend and would be available to host the game. Ironically, LSU last played here in Orlando as part of the Buffalo Wild Wings Citrus Bowl on Jan. 1, 2017. It is the second time an LSU game has been impacted by a storm during the past two seasons, with the Tigers’ game at UF last season rescheduled.

Orlando’s Camping World Stadium has previously served as a relief option when originally scheduled venues are unavailable, hosting the 2016 ACC Championship Game when the league announced it could not host neutral-site events in North Carolina due to a discriminatory law targeting the LGBTQ community that was passed by the state legislature.

That LSU played its last game at Camping World Stadium, and moving the LSU-BYU game there might make for the second time in six years that LSU has played its season opener at the same venue it played its bowl game (LSU ended the 2010 season with a win over Texas A&M in the Cotton Bowl at AT&T Stadium, which was the venue for its season-opening 2011 win over Oregon), doesn’t make Orlando a good option for Saturday’s game. Weather isn’t an issue, but who’s going to be in the stands? It’s not a great look for two well-followed and historically significant teams to play in front of 3,000 people hundreds or even thousands of miles away from their campuses. To play the game in Orlando would prove two things: first, that ESPN is run by the same tone-deaf idiots who thought play-by-play announcer Robert Lee would be a controversial choice to call a game at the University of Virginia, and second, that Disney’s money-grubbing to feed its theme parks knows no end.

LSU officials have maintained since Sunday that they have no control over where the game will be played. That’s probably a smart statement, because it’s beginning to sound like few will like the choice ESPN makes.